The Breithornzwillinge (from German: "Breithorn twin", in Italian Gemello del Breithorn Orientale) is a peak of the Pennine Alps, located on the border between Switzerland and Italy, between the canton of Valais and the region of Aosta Valley. It is part of the Breithorn massif, located east of the Theodul Pass. It is located just east of the Eastern Breithorn and west of the Roccia Nera. It is sometimes considered as a Gendarme and it is indicated as Gendarm on the Swisstopo topographic maps.

Italian side: Cervinia Breuil-Cervinia Valtournenche is located in the Aosta Valley of Aosta, in the north-west of Italy. It is served by the motorway A5 Turin-Aosta. Exit at the Chatillon - St Vincent turn off and continue along the regional road towards Cervinia for 27 km. Valtournenche is 7 km before Breuil-Cervinia and 21 km from Chatillon. By plane: national airports of Turin Caselle (118 km), Milan Malpensa (160 km), Milan Linate (180 km) and the international airports of Frankfurt, Paris, Zurich and Geneva. Swiss side: Zermatt Located in southern Switzerland at an altitude of 1,600 m just a few hours from the international airport of Zurich, Generva and Milano. Zermatt easily accessible from western, northern or southern Europe. International rail connections link up to Brig with the modern narrow-gauge Zermatt railway, which takes only 90 minutes to climb through the Visp Valley. Motorists can drive as far as Täsch, from where trains (shuttle trains run every 20 minutes) and minibus taxi operate a shuttle service for the remaining 4.8 km/3 miles to Zermatt. Low cost parking are available in Täsch, as well as in Visp.

North-East Face (TD+) Another of the prolific Grassi's routes on the mountain and given the name Immaginando l'Inimmaginabile. The route climbs the lower part of the face via a difficult goulotte before moving L to join the line of the ENE wall route. The routes follow the same line to the steep upper rock wall where the Grassi routes takes a system of icy couloirs and ledges towards the col W of the highest point. From the Rossi-Volante bivouac: from Schwarztor descend the L bank of the Schwarze Glacier keeping close to the rocks of the Roccia Nera) until you reach the foot of the wall. To the E of Pt. 3,512 is a long steep and narrow couloir (the NE couloir and the line of Primorska Smer, P. and P. Podgornik, 22 Aug. 1980; TD.) and to the E of this is a chimney-couloir easily seen from below. Climb the snow/ice slope below the couloir and one pitch up into the narrower part of it (good belay point). Continue with difficulty up the narrow icy goulotte. This is taken on the L side at first then on the R by a vertical wall, to pass an obstruction, before returning to the L side again and finally exiting by the R wall (75-80° with one section of 90°). Short steps lead to a rib which in turn leads to a big icy ramp slanting L. (1h). Three pitches up the ramp lead to easier ground (common with the ENE wall route) as far as the upper rock wall. Reach this, via a snow slope, at an icy chimney-couloir which slants steeply R. An initial narrow and vertical section of the chimney leads on to some mixed terrain and subsequently a steep and narrow rocky section (IV+). This is followed by a further icy chimney (90°) before easier climbing leads to a snow crest. Mover Rwards now over mixed ground to a snow slope below a steep wall. Cross the snow slope Rwards for 25m to where a belay can be taken below a peculiar overhang. Keep moving R to an icy ramp and climb it, with difficulty at the start on mixed terrain, to its end and a belay. Keep on the snow slopes just R of the rocks above and climb to a small but very steep couloir which is used to exit the route. (8h)Total climbing time is 9h East-North-East Wall (D+) The first route climbed on the N side of the Breithorn on the section between the Roccia Nera and the Younggrat and achieved by the well-known Italian female alpinst Anna Molinari with one of the famous Frachey brothers. The lower part of the route is somewhat exposed to stonefall. There are some pitons in place. From the Rossi-Volante bivouac: from Schwarztor descend the L bank of the Schwarze Glacier keeping close to the rocks of the Roccia Nera until you reach the foot of the wall. After crossing the bergschrund, start the climb further L than the NE face route at a slabby rock face L of a conspicious snow patch. The route slants slightly Rwards to a short wall, which is climbed, and then a short ice crest is followed to reach the foot of a steep rock step. Cross an ice slope Rwards to gain a fairly steep icy couloir. Climb this for 50m using holds on the R wall and then a rocky couloir for a further 40m to a jammed block. Leave the couloir here, moving R with the aid of the block, and get on to a ramp slanting up from R to L (cairn: possible snow covered). Follow the ramp to its end and then climb the wall that confronts you on its L side. The line now follows a series of little couloirs and ledges slightly Lwards to flat ledge. From here short rock steps and icy grooves lead to the summit.Total climbing time is 7h. 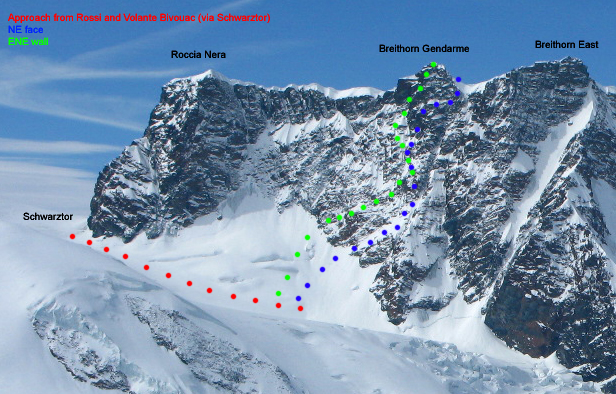 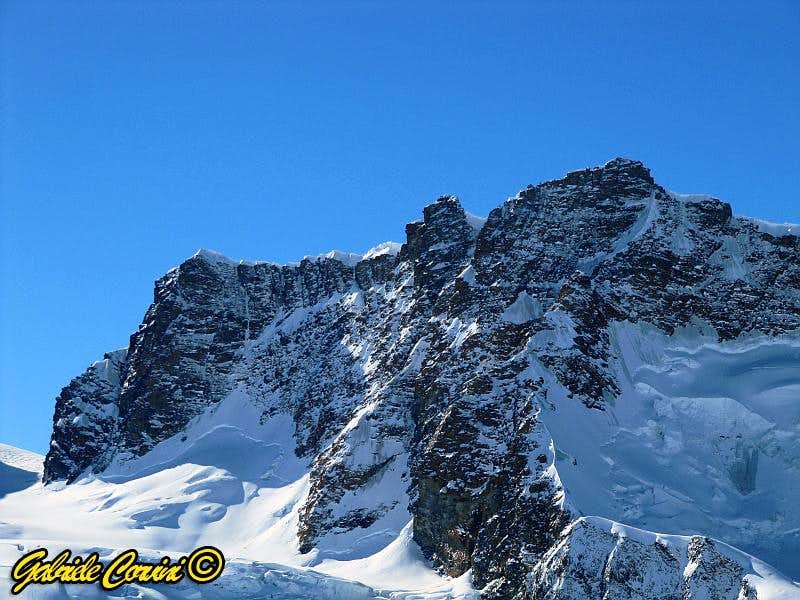 Breithorn north side
South-West Flank (PD+) - Normal route From the Rossi-Volante bivouac climb to the top of the rognon on which the hut stands and then straight up the snow slope to the crest of the ridge (possibly a cornice) and then follow W to the summit. To the ridge the route is in common with Roccia Nera. At the end of the ridge, stay on the left to move around the final rocks and follow the couloir (ice) directcly to the summit (2h). This route is also climbed during the Breithorn traverse. 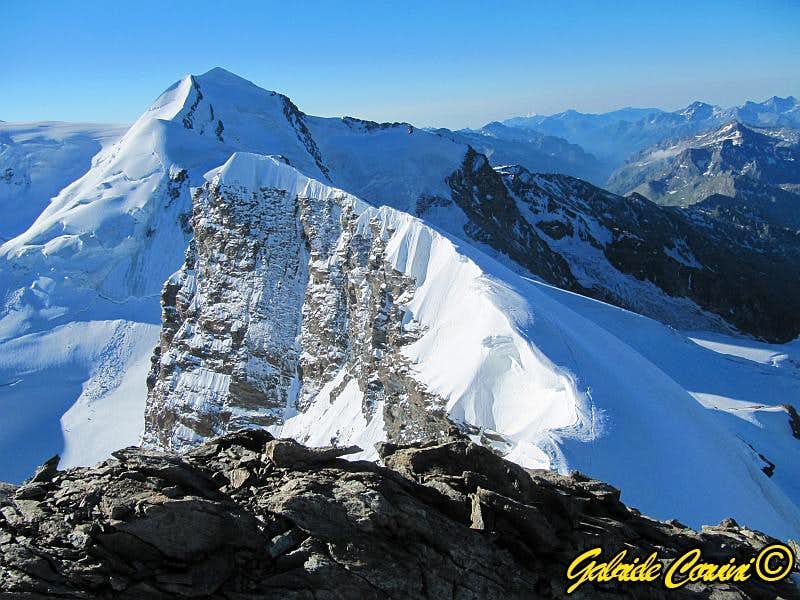 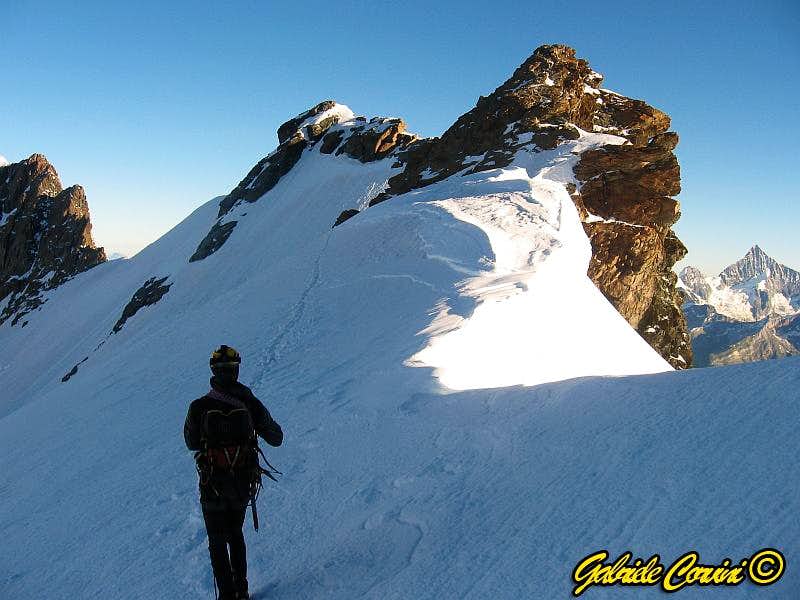