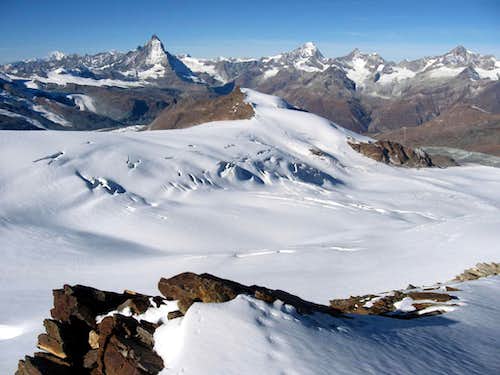 andrea.it - Stockhorn, seen from Cima di Jazzi. It is the hill in the middle - from this perspective completely surrounded with high glaciers.
From below the high summits of Monte Rosa, Liskamm and Breithorn, towards the north-west big glaciers are flowing. Ultimately they join into Gornergletscher, which flows towards the west and finally ends above Zermatt. North of Gornergletscher from below Rimpfischhorn and Strahlhorn towards the west flows the smaller Findelgletscher. Between these two glaciers quite a long ridge stretches in the east-west direction. It is mostly rocky, but all sunny and not too sharp. Being in the middle of the world famous arena of Zermatt this ridge is created for easy tours into the world between Matterhorn and Monte Rosa. And more. On the famous Gornergrat, 3090 m, we can get from Zermatt by a mountain railroad. No wonder that in a nice day you will find there big crowds. And they have something to see. The view, for example, from Riffel See on Matterhorn is perhaps one of the most fascinating views on a mountain on the whole globe!

Stockhorn is the easternmost end of the mentioned ridge. Despite a decent altitude it is quite easily ascendable. What is most important is, that no glacier equipment is needed (as the majority of tourists don't have it). A little bit of up and down the ridge, an easy passage over the upper snows of Triftjigletscher and a short, not difficult rock scramble to the highest point.

These are of course exceptional. In comparaison to the views from Gornergrat, the panorama from Stockhorn is different in the respect that we are already much closer to Monte Rosa massif. From Stockhorn it is viewed already from the north-northeast direction. And, standing on top of Stockhorn, we become aware to be already entirely in the middle of high glacier plateaus, which is not the case on the much lower Gornergrat. From Stockhorn the glaciers simply continue towards the high 4000-ers and passes between them.

bergauf - Stockhorn panorama
And here a Matterhorn shot from Hochtaeli - from above Gornergrat: 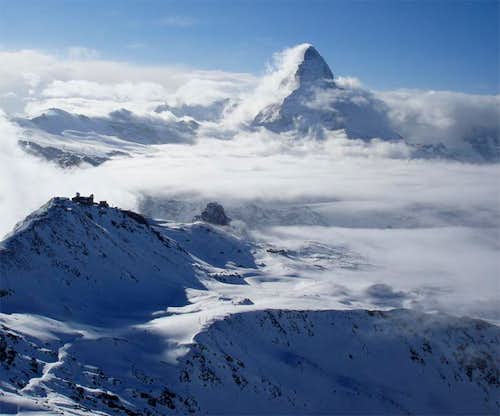 fk - Matterhorn from Hochtaeli - from above Gornergrat

The tour on Stockhorn almost exclusively starts in Zermatt. If you don't have enough time, then you will take a train further up on Gornergrat. Zermatt is not reachable by personal vehicles. You must park in Taesch (and pay fee) then you get into the famous Zermatt by train. Or we walk 1 h 30 min.

If we have a whole day, and if we are fit enough, it is most recommendable to go on Stockhorn just from Zermatt, 1616 m. All right, we shall do some 2000 m of altitude up and the same down, but having a whole day, we can do many stops to enjoy the great scenery in the middle of Wallis giants. Just till the summit rocks the tour is easy, to the summit then some easy scrambling awaits us. Difficulty is UIAA I degree. Orientation is easy. In summer hiking gear is sufficient - so good shoes and poles. Count with 6 hours for ascent and at least 4 hours to descend. 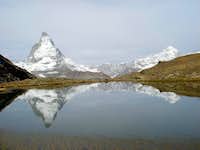 Herb - Matterhorn from Riffel Alp
From Zermatt we go by a good marked path towards the south, on Riffelalp. The trail goes mostly close to the railway. At first we ascend through a high forrest, but soon it clears and we continue over grassy and rocky slopes. At Riffelalp station, 2211 m, we cross the railroad and continue towards the south on Riffelberg, 2582 m. From there we go mostly along the railroad towards the south-east and finally towards the east, all the way up to Gornergrat, 3090 m. On the panoramic ridge there is a big hotel and the upper railway station.

jonybakery - Matterhorn from Riffel See
From Gornergrat we continue by the ridge towards the east. We soon reach the saddle 3095 m, which is important, because from it down towards Gornergletscher a good path goes. That is the main approach for Monte Rosa Huette and further to the summit of Monte Rosa. But we don't need to go down those 500 meters. We simply continue by the ridge on the nearby Hohtaelli, 3273 m. From that summit (cable car station on top) we descend a little and then again continue towards the east. Stockhorn is already close, but we still have some 300 meters of altitude to ascend. The terrain becomes all rocky. Just to the ridge on some places the snows of Triftjigletscher reach. But this glacier is easy and we simply walk up towards the summit. Then the ridge ascends first on Klein Stockhorn, 3421 m, from which we continue towards the main summit. The path had disappeared long ago, but we simply climb up by the ridge, choosing best passages. Rocks are easy and if we are not too tired, we soon reach the top.

The path above Gornergletscher - on the right is Riffelhorn
Till the saddle below Gornergrat we certainly descend by the same route. There we have two options. The first one is to go back via Gornergrat. That may be more boring, because we were there already. The second option is to descend 400 meters towards the south, towards the bog Gornergletscher. There on the altitude of 2695 m the path branches. Towards the left the path continues a bit more down to the glacier and then goes across it to Monte Rosa Huette. The right path goes across the slopes above the glacier. That is the path which conquerors of Monte Rosa use, when returning from the mountain (to avoid the 400 meters of ascent on Gornergrat). The path goes almost horizontally on the saddle between Gornergrat and Riffelhorn, 2928 m. The saddle is 2775 m high, so we still need to do some 100 meters of ascent. From the saddle we then descend towards Riffelsee and further down in Zermatt.

On Stockhorn we best ascend in summer. In spring, during the ski season the ascent is also possible, because we get high with the railroad and cable cars. From the summit even skiing would be possible - good technique is required.