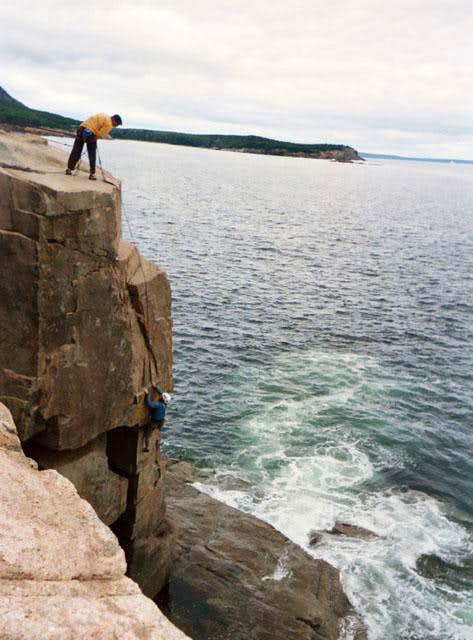 This mountain is the highest on the U.S. eastern seaboard. In the winter it is has the earliest U.S. sunrise. It is the highest elevation of Acadia National Park. The island and mountains were identified by Samuel de Champlain in 1604 as Mont Desert., meaning barren mountain. Most everyone on the island pronounces it Mount Dessert as though it were ice cream. The top is still fairly bare and provides a good outlook into Frenchman Bay and Penobscot Bay-great sunset vistas. Since 1931 there has been a paved road to the top-but while sometimes busy does not have a circus atmosphere. The carriage roads were developed for the well to do including the Rockefellers and occassionly you can be distracted by an ocean liner (giant yacht) pulling up to a villa. The Rockefellers and their associates gave the park to the United States at about the time they were donating the Teton Park. The precipice is the hightest cliff on the island and it is on a sub-summit called Mt. Champlain. Other cliffs include Great Head which is the northern boundary of the Sand Beach. South of the Sand beach are the Otter Cliffs with fun climbs such as Wonder Wall and Rock Lobster. Great Head is being developed by climbers and is more serious-the highest sea cliff on the U.S. east coast. The otter cliffs provide more mellow climbing and are being developed by the boulder communitty. The area was ravaged by a great forest fire in 1947 but has recovered. It is a boundary vegatation region being the northern limit for Pitch Pine and Quercus Ilex-Holly Oak. Be sure to check out the 5.10 left facing dihedral on the precipice-Chitlin Corner FA Doug Madera and Paul Ross. Do not miss the balanced boulder on the South Bubble by Jordan Pond.

Dawdle north from Portland along scenic coastal U.S. 1 or take I 95 from Portland to Bangor. Follow route 3 from Bangor- Brewer thru Ellsworth (28 miles) past the Trenton Lobster pound at the Trenton causway. Drive into Bar Harbor and find the Acadia National Park Entrance. The signage is good.
If on the other hand you have chosen the coastal route, continue up through Freeport, Bath, Rockport, Camden up to Bucksport on Route 1. Route 1 will take you to Ellsworth in 21 miles and you precede as above.

May and early June beware of the black fly. Imagine the worst film you have seen of swarming mosquitos [dan quayle?] and multiply their number by ten while dividing the size of the insect by 10 and you will understand the swarm. Native Americans were driven to the coast in the spring by Black Flies and Mosquitos.

Spring Summer and Fall. The Precipice is subject to some closures for falcon nesting.

I have never been to Acadia - should I camp at Blackwoods or Seawall? top
Blackwoods is located on the east side of the island and closer to the major portion of the park, the Carriage Roads, and Bar Harbor. Seawall is on the west side of the island, which is less crowded. Facilities are the same at each campground - picnic table and grills on each site, restrooms with running water throughout the campground, no showers. Dump station. Both have wooded sites with no sites directly on the ocean.