Cerro Toco is a stratovolcano located in the eastern part of the Atacama desert in Chile's II Region (Antofagasta), approximately 6 km (4 mi) south of the border between Bolivia and Chile and 12 km (7 mi) SE of the Juriques and Licancabur volcanoes. It conforms the north eastern extreme of the Purico Complex, a pyroclastic shield made up by several stratovolcanoes, lava domes and a maar.
Cerro Toco is located in the Chajnantor Scientific Reserve, as is most of the Purico Complex. The Atacama Cosmology Telescope and the Huan Tran Telescope are located on the western side of the mountain at approximately 5,200 m (17,100 ft). Although it is 320 meters less high and far less spectacular of a sight than it´s famous neighbour Licancabur, Cerro Toco still provides rewarding hiking opportunities. Novices can get a gentle introduction to high altitude climbing, while the views from the summit to the surrounding volcanos such as Licancabur and Lascar and beyond the bolovian border to Laguna Blanca are breathtaking. For more experienced climbers this is still a good summit to get acclimatised for trips to one of the nearby higher mountains.

Cerro Toco is located 50 km east of San Pedro de Atacama in Chile, near the bolivian and chilean borders.

Cerro Toco is easiest tackled in one day from San Pedro de Atacama in Chile, a 45 km drive out of town. The nearest airport is in Calama. There is no direct bus from the airport to San Pedro but private vans take you there. Alternatively you can take a taxi from Calama or hop on one of the buses of TurBus in Calama to San Pedro. They leave Calama to San Pedro in several hours, pretty much one each half an hour daily, and take approximately 90 minutes. There are also buses from other major cities such as Aríca (approx. 11 hours, night bus).
For an overview on how to get to the trailheads, see the draft below and visit the pages of the routes.

The Southern Route has an elevation gain of about 600 meters and takes 2 to 3 hours up, 45 min down.

The Northern Route is longer with an elevation gain of about 1000 meters, taking 4 hours up.

Vulcano Expediciones in San Pedro guides people up all major volcanos in the area.
Update by Parofes in jun 20, 2012: Look for Christian, he is my friend and you'll get a nice deal out of it.

Llano de Chajnantor Observatory is the name for a group of astronomical observatories located at an altitude of over 4,800 m (15,700 ft) in the Atacama Desert of northern Chile. The site is in the Antofagasta Region approximately 50 kilometres (31 mi) east of the town of San Pedro de Atacama. The exceptionally arid climate of the area is inhospitable to humans, but creates an excellent location for submillimetre astronomy. This is because water vapour absorbs and attenuates submillimetre radiation. Llano de Chajnantor is home to the largest and most expensive astronomical telescope project in the world, the Atacama Large Millimeter Array (ALMA). Llano de Chajnantor and the surrounding area has been designated as the Chajnantor Science Reserve (Spanish: Reserva Científica de Chajnantor) by the government of Chile.

No permits required. Vulcano Expediciones in San Pedro de Atacama offers the climb for two persons minimum. Rates for the climbs can be negociated in town with vulcano personal. 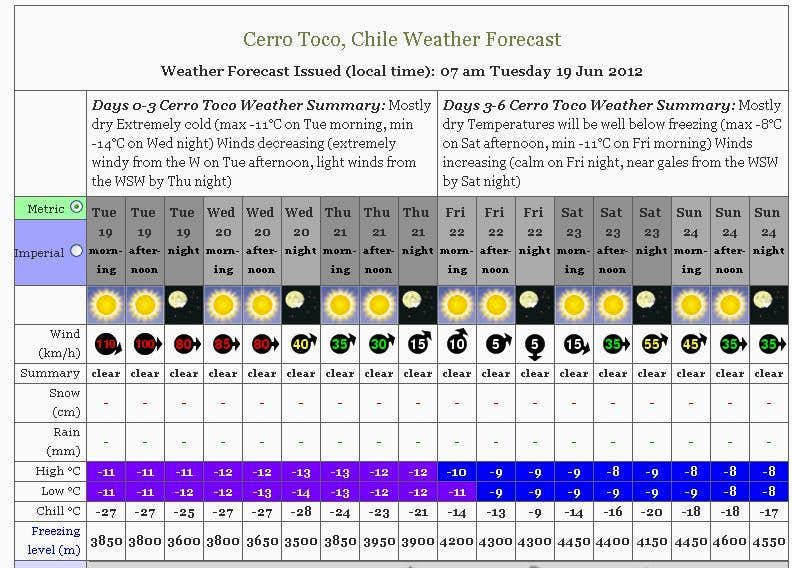 To hike/ climb is a dangerous activity and requires proper equipment and clothing, the owners of this page cannot be blamed by injuries caused to anyone who read this page for its info about the mountain, and eventually got hurt by doing so with reckless behaviour or bad weather conditions.

The biggest brazilian website about climbing and mountaineering, for which Parofes is a columnist:

Vulcano Expeditions, go with them and you won't regret: http://www.vulcanochile.cl/