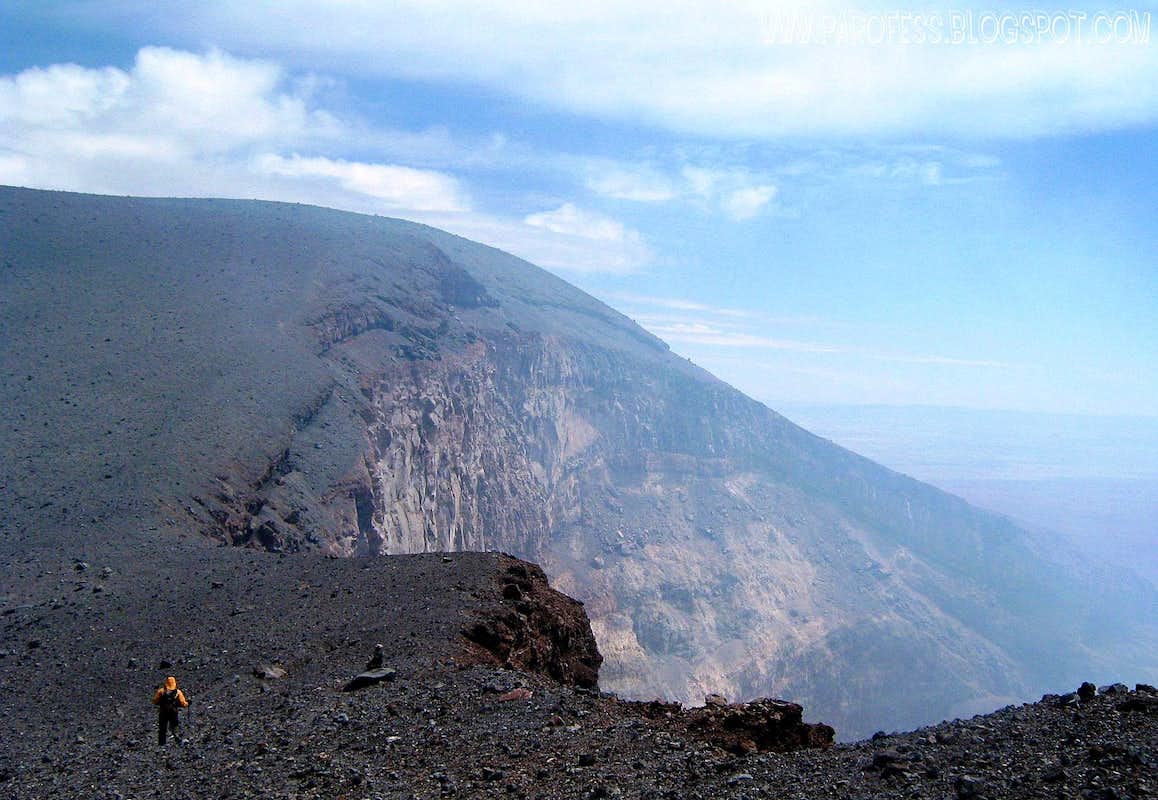 Láscar is the most active volcano of the northern Chilean Andes. The andesitic-to-dacitic stratovolcano contains six overlapping summit craters. Prominent lava flows descend its NW flanks. An older, higher stratovolcano 5 km to the east, Volcán Aguas Calientes, displays a well-developed summit crater and a probable Holocene lava flow near its summit (de Silva and Francis, 1991). Láscar consists of two major edifices; activity began at the eastern volcano and then shifted to the western cone. The largest eruption of Lascar took place about 26,500 years ago, and following the eruption of the Tumbres scoria flow about 9000 years ago, activity shifted back to the eastern edifice, where three overlapping craters were formed. Frequent small-to-moderate explosive eruptions have been recorded from Láscar in historical time since the mid-19th century, along with periodic larger eruptions that produced ashfall hundreds of kilometers away from the volcano. The largest historical eruption of Láscar took place in 1993, producing pyroclastic flows to 8.5 km NW of the summit and ashfall in Buenos Aires. The last one was big but not that much, it happened inbetween 2006-2007.

Lascar is a popular target for mountaineers, due to its relatively low altitude is a good mountain to get acclimatized for higher tour.
Under good weather conditions, warm clothes and trekking boot are enough, but after a snowfall or in the winter season, (June - August) you may need special gear for the summit area.

The massif is composed of two strato-volcanoes whose center are 1.6km apart. Each crater measures approximatey 900m in diameter and 300m deep. At present day, Lascar is the only volcano in the region to be erupting Lava. Background activity varies from steam emissions to fumarolic emissions, but occasional minor vulcanian eruptions occur and slugs of ash and vapour are emitted.

From the touristic center of San Pedro de Atacama a road leads through the villages of Toconao and Talabre, past Legia Laggon, up to southeast foothills of Lascar. It´s a tough road and it´ll take you about three hours for a 120km trip. Beware ! When it snows, the road tracks disappear, making it dangerously difficult to find the way back to San Pedro.

A 4x4 vehicle is highly recommended!

From the large boulders follow the trail for about 1 hour on foot or 10 minutes by car, up to the end of the track. Then climb up the smooth part in the middle of the slope. From here a discernible path runs up the volcano; however, on this side the air is often rarefied by sulphur dioxide, at which times this route becomes impossible.

Alternatively, take the way to spot ridge at the western side of the slope. However, this route is steeper, takes you higher and consists mainly of rocks. You will need approximately 3 hours for this route. 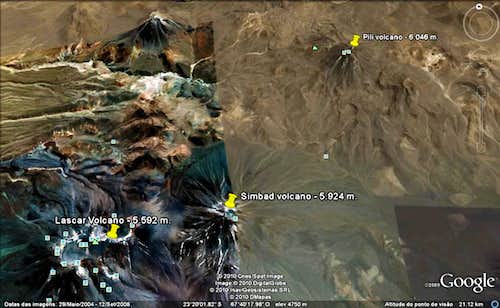 No permits or summit fees are required, but in San Pedro it is possible to hire vehicles and guides if you want to.

Summer is dec-march, also wet season. We were there in February and it was very nice, though not warm. The sun is intense and the nights can be cold. Put on lots of sunscreen everyday and be prepared for temps down to the 20's F for January, colder in their winter.

It is often not possible to camp on the mountain slope due to the sulphur dioxide laden wind that blows down the mountain. Further down, at aprox. 4500m at the left side of the road, you will find some spots sheltered from the wind suitable for setting up the tents. Anybody who is not yet acclimatized to camp at such high altitudes, can find a nice place to camp at Tumbre valley (3900m). A good choice, where you will find nice places to hike. Also very good to camp by Laguna Lejia at 4.300m high. 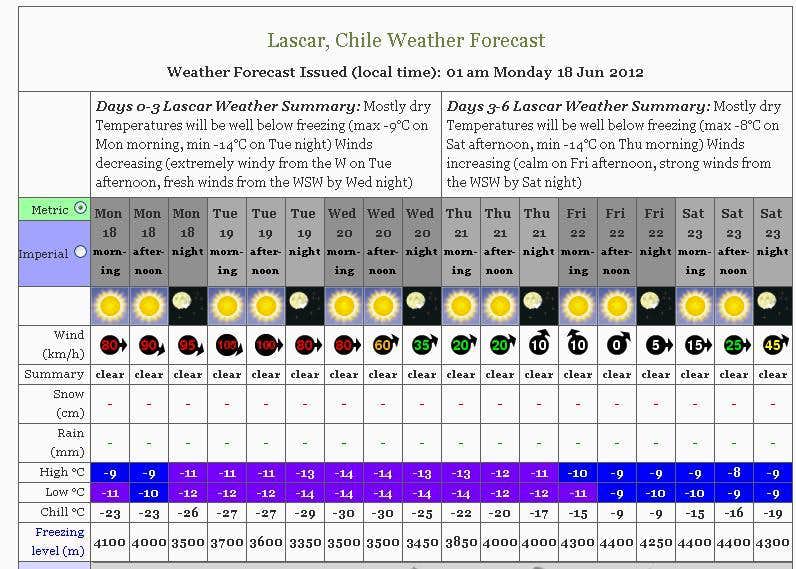 Before go on to the climb, take a look at this link, it will help you on the safety issue: RECENT INFORMATIONS ABOUT LASCAR ACTIVITY