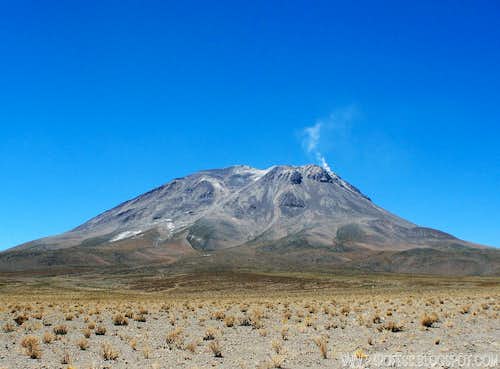 Volcan Ollague is situated on the Chilean/Bolivian border in the Northern Atacama Desert, and rises above the small village of Ollague.
The volcanoe is considered active, with quite intense fumarolic activity, although no there is no historic record of an eruption.
Near the summit at 5600 m (18370 ft) used to be a sulfur mine (one of the many mines that were infamous for poor working conditions), with an old poor road leading up to the mine.
The road is also the easiest way to the summit. The main difficulties are lack of water, the elevation gain of 2200 m (7200 ft) and the great altitude.

An acclimaticed party has two options:
1. Go light and fast in a day: Recommended. This way to get the around the problem with the water. Fill up in the village, start really early
2. Split it in two days.
Take enough water for two days then - there is usually no water on the mountain.
During an El Niño/ENSO period fairly amounts of snow can fall even in the Atacama Desert. Then there is water in the form of snow on the mountain - you can check this from the village though.

FROM CALAMA IN CHILE:

The faster option; leaves 12:00 in the night, and gets you there at around 6:00 in the morning. Leaves twice a week, sundays and Wednesdays.
The bus is not heated and goes for long stretches at over 3000 m (10000 ft) on the desert altiplano!

My recommentation:
Buy blankets in Calama for the trip. A sleeping bag will also do, however, the bus is crowded and quite dirty, so few will like to do this.

The coldest part is the time from 6:00 am (coldest time of day!) when the bus arrives to around 8:30 when the customs ("aduana") opens. In winter it can be as cold as –20° C in Ollague in the morning.
Although you are getting of before the boder, the custom officiers will probably still want you to go through passport control. It happened to me, but can vary.

To go back to Calama:

The bus goes mondays and thursdays. It should depart from Ollague anytime between 11:00 and 14:00.

Take a seat on the left side to see the Salar Ascotan and the flamencos there, as well as the north side of Volcan Ollague with it´s smoking fumaroles!

The last train still operating in Atacama Desert that also takes passengers and passes through Ollague. Leaves only once a week – Wednesdays

be prepared for a long journey. It leaves from Calama 23:00 in the night, gets there around 7:00 in the morning, but often also later.
In Ollague people travelling to Bolivia have to change to a train coming from the Bolivia side at around 10:00 or later (noone seems to know exactly).

Less cold than the train! Still, blankets are recommended.
Note: Taking a bicyle will most likely be not possible (on the bus yes - on the roof)!

To go back to Calama:

The train leaves on mondays only at around 18:00. The problem here is that you will get to Calama around 1:00 in the night, and finding a connection bus to
either Antofagasta or San Pedro will be impossible!
Check for a place to stay in Calama in advance.

To go from Ollague to Uyuni:
The train Leaves around 10:00 or later in Ollague

FROM UYUNI IN BOLIVIA:

If you have fruits or milk products in your baggage it will be confiscated on the border! Powder milk it usually an exception though.

Ask for details in the company´s office (see below!)

Leaves in Uyuni at 8:00 in the morning, only on mondays

There are no official red tapes. Despide Volcan Ollague being a border peak, the usually necessary permit is not needed.
(However, this might be subject to change)

Inofficial tapes: this region is not used to tourism and a few things should be considered:

1. Register with the "Carabiñeros" (police) before you head off. They want you to do it and it is not a bad idea anyways.

2. Ollagüe is not used to tourist and climbers. The people there are very friendly and also curious. Please threat them with respect and learn about their customs and culture before you go there. Read a bit about the history of the Quechua. Learn a few words Spanish (This is mandatory anyways for travelling in SA).

3. The region is pristine. Leave it like that. Take out what you take in, and be respectful to the nature 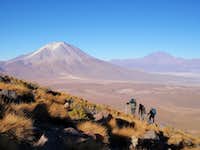 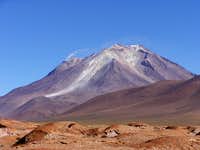 Photo by SPer hyperbolictans
Basically all year round, except January and February, when violent storms can hit the altiplano ("Invierno Boliviano").
During that period (Jan, Feb) you can still climb, you just need to watch the weather carefully. I do not recommend tours that last longer than a long day during this period, in order to be able to respond to weather changes swiftly.

Some chances of finding water on the mountain are during July and especially August. It might even snow in Ollague at that time of year.
However, it tends to be very windy around that time, and the nights in 4000 –5000 m are as cold as –30 or below degrees Celsius! Act accordingly and bring the gear for that – including solid mountaineering boots, that are well insulated.
In winter crampons and a light ice axe can also be mandatory, since the snow tends to be very hard and icy, and often you might encounter ice passages.

Spring, summer and fall are far less cold, but there will be no snow on the mountain. The Invierno Boliviano can bring snow, but it usually does not last long.

Camping is allowed anywhere on the mountain

Usually there are good conditions on the mountain.

Then you might not even get to the village. For information in this case call the Carabineros in Calama at +56-(0)55-342771 and let them give you the phone number of the Carabineros in Ollague. If the number has changed look it up here: Carabineros, offices in Chiles II Region

They are most likely the only people who have reliable information.
I do NOT recommend asking the tourist information (SERNATUR) 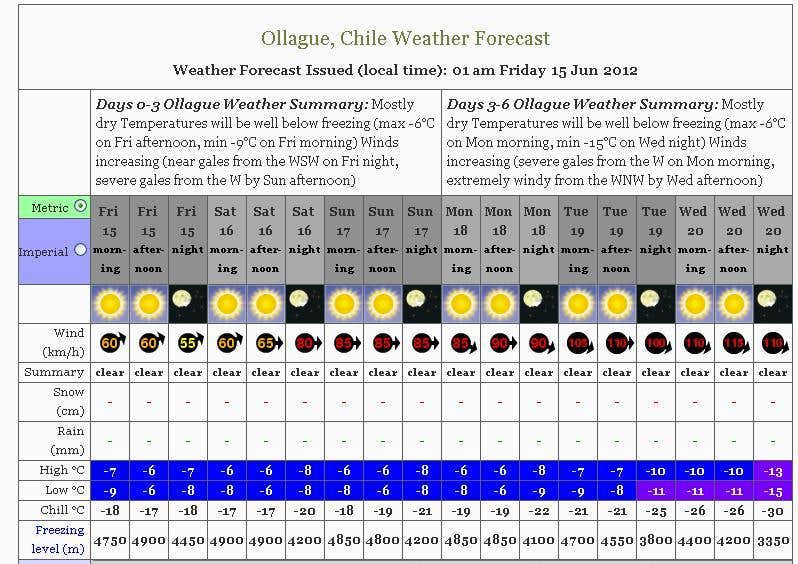 If you intend to do mountaineering or trekking in the area around Ollague, get the map "Ollague" (1:250 000;
Nr. 2100-6730) from the Instituto Geográfico Militar in Santiago de Chile

Costs 8100 Pesos.
It is quite detailled. and the best map you can get. Roads are partly wrong, important for those who intend to go there by 4 WD or motor cycle. Get a good road map additionally in Chile.


The village of Ollagüe

Ollague is a forgotten place, some call it the "end of the world", and if you get there you might well think that it deserves this name.
But unlike many guide books say, Ollague is a real village, with a small store, and two "hospedajes" (hostels).

It is a good place to experience the Atacama, to see how the people live here. There is no bar, pub or any kind of entertainment, so if you want that, go to San Pedro.
This is a place for people wanting to look a little deeper into Northern Chile, for people searching a place to relax for a few days, for photographers, railway-enthusiasts or adventurers.

The journey there alone is an experience, since you will travel like the Bolivians travel, not like the tourists, the train and bus is packed with Bolivians going back from "shopping" in Calama and the scenery is amazing!

When you are in Ollague you will more feel like in Bolivia than in Chile, with most inhabitants being Quechua-Indians.
In fact, Ollague is the last place in Chile, where Quechua is taught in school, and where traditional rituals are praticized (in nearby Coska).
There are no tourists there, the few who choose to take the train or bus from Calama to Ollague and on to Uyuni (Bolivia) usually do not stay here, but travel on to Bolivia.

Here you can meet Quechua-Indians, and if you are staying in the "Lican Huasi" you might have the chance
talk with some of them in the cosy dinning room of the hostel.

You can also purchase products from them like tea or wool products to keep you warm up here on the altiplano.

Important For people intending the journey here by car (4 WD!) or motor bike:
No fuel is avaible here in Ollagüe! Next gas stations are in Calama and Uyuni.
You might be able to get some from the Carabineros in Ollague or Ascotan if you run out of it by accident.

Very nice hostel, clean, comfortable, nice owners. Hot water all the time. Shared rooms, each one with bathroom, but you will
most likely be the only guests anyways.
Any meal (whether breakfast, lunch or dinner) costs just 2000 Pesos
Located at end of northernmost street, direction
Bolivian Border

Restaurant with rooms; basic, often no water until
midday, since water comes out of barrel, that freezes
during night
Located on the same street as the Lican Huasi, just at
the other end (2 min walking)
3000 Pesos/night

Actualy i know something about that. At Ollague village there's a small police station, people can ask for the permit there, but i'm not sure about fee... :)