PAROFES
Add photos See all photos
From the sands of the driest desert of the Earth several volcanoes rise above 5500 meters at the area. Right by Laguna Verde, Laguna Blanca, and Licancabur volcano, is Juriques volcano and its huge crater of 1,5 km wide (almost one mile!). That extinct volcano lies at the Bolivia/Chile border, it is not a technically challenging climb, but the altitude of this volcano make it a very worthwhile climb of course, especially if you are trying to acclimate to higher altitudes close by such as Ojos Del Salado, Sairecabur, and Llullaillaco. When climbing Juriques volcano, you can sleep at approx. 4.430 meters (14.534 ft) and climbing to the summit at 5.704 meters (18.714 ft). As you can see, it is not a technical climb and i got all the info i (and of course all of us) need to summit the volcano. How: When i was there for the fourth time last march (2010) to climb Licancabur volcano, i asked for directions with one local guide. He summited Licancabur and Juriques over 500 times already. Pretty impressive. There is not much that can be said about the volcano, no much information needed. Very easy to identify from hundreds of kms away as they (Juriques and Licancabur) dominate the view from the nearest town: San Pedro de Atacama.

SOME VIEWS OF THE VOLCANO BY SPers: To get there is easy, You have to get to San pedro de Atacama - Chile. Once you get to the city, just look for a transport and if you don't feel like going up alone (there's no visible trail to follow so normaly people go on guided expeditions, but of course, you can go by yourself but i would not recommend!) i suggest you to hire a guide. There's plenty of them at the city. The climb cost is around CH$ 100.000,00 (about US$ 200.00) and it is a two days only climb! That's why the altitude is dangerous, there is always a chance of altitude sickness. The altitude difference between the summit and the city is huge: 3.400m.

This is not a wild guess, this is all info collected with the local guide with 500+ times at the summit of Juriques and Licancabur. And i saw myself the volcano so many times i can't say the exact number, but i can say that: I saw the volcano in 2007, 2008, 2009 (3 or 4 times) and 2010 (at least a couple times) from all sides including from different summits nearby such as Licancabur, Sairecabur and Toco. 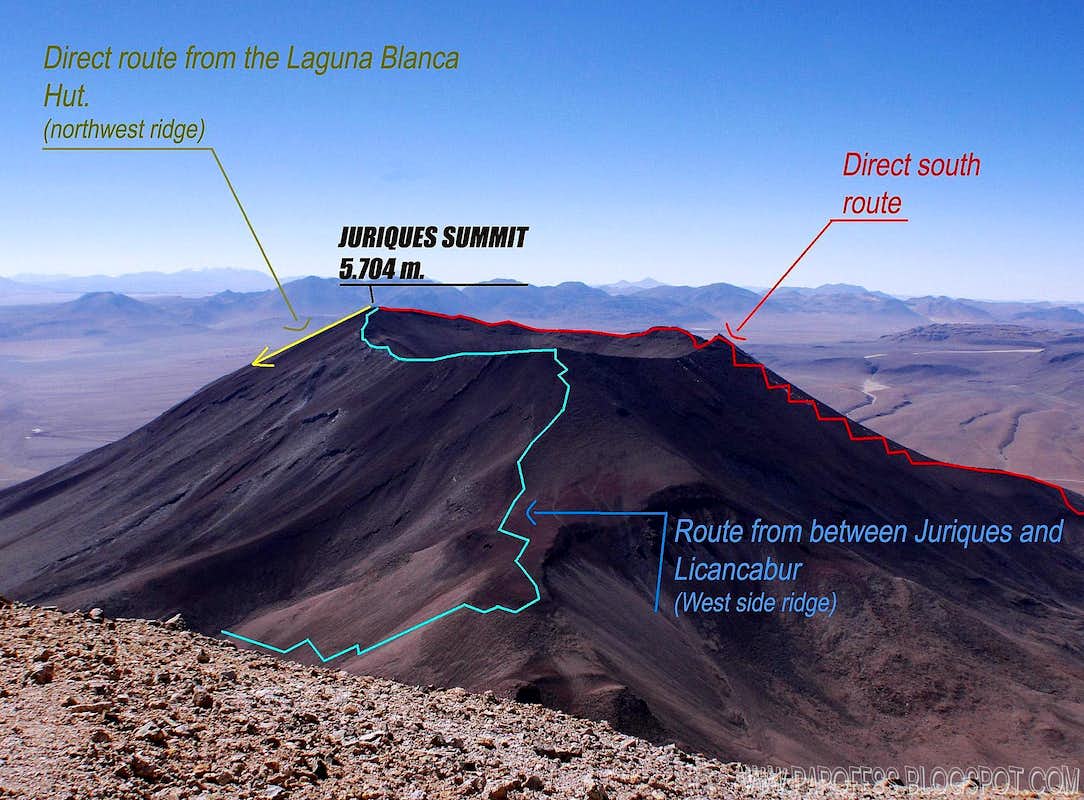 Informational image with different routes to the top. Zoom in to see better. 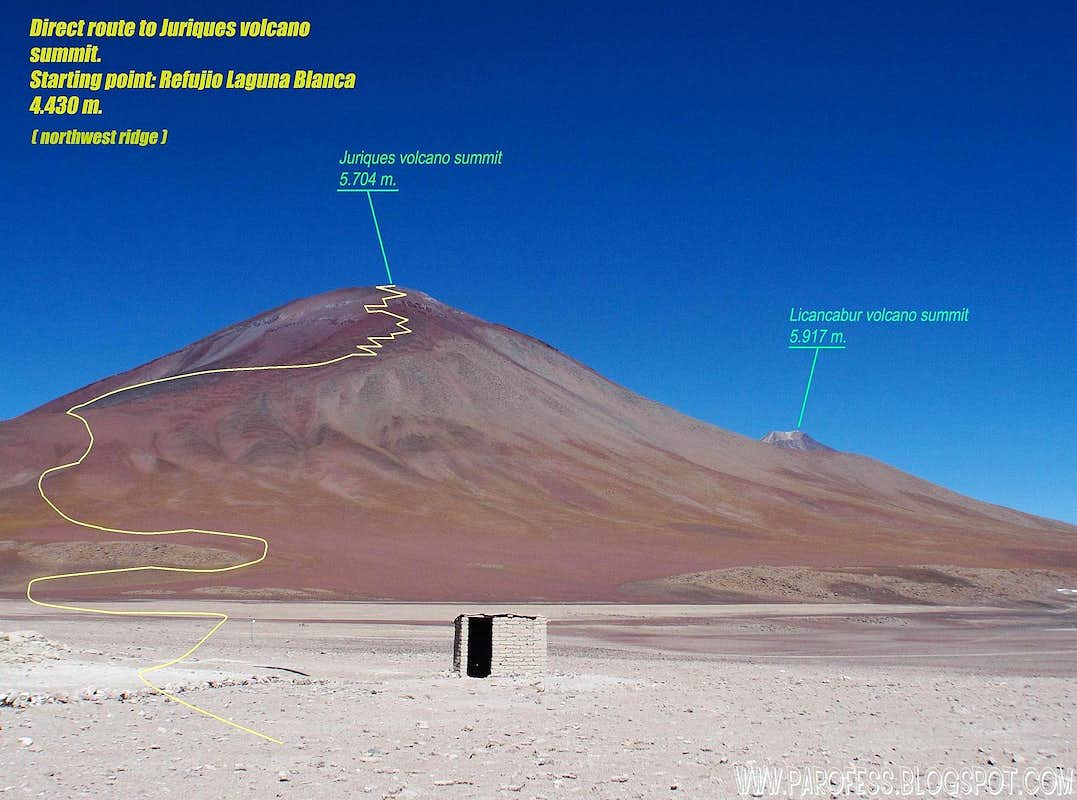 Informational view from just outside the Laguna Blanca Hut and the park administration. Summit visible from here.

Informational view from just outside the Laguna Blanca Hut and the park administration. Summit visible from here. A fee is gonna be charged to visit the park. 30 Bls.

There is also another big ass problem: Since San Pedro de Atacama used to be Bolivian lands (it was taken by war! People that was born in San Pedro consider themselves bolivian.), the ground around Licancabur and Juriques is Mined Field!!! I strongly recommend to hire a local guide to do the climb without get seriously hurt or end up dead in the desert.
A fee is gonna be charged to visit the park. 30 Bls.

Camping at this area is not alowed because of the mined fields. Use the Laguna Blanca Hut to slepp, as i said in the informational photo: They have fantastic and confortable beds, very clean, with amazing meals. Last time i was there after i summited Licancabur volcano, when i got back to the Hut, there was Llama barbecue!!!
Low prices around 10 US dolars. No reservation needed.

The Hut and the view from up there. Altitude: 4.430 m.
Bruno_Tibet (SPer) told me that it was okay to camp at the bolivian side 10 to 15 years ago, and that the information of the status of prohibition going on right now may be just an excuse to the climbers feel like to pay for the guide and accommodation. Well, it is a possibility and a very good one, it makes perfect sense to me since the people are very poor and they do anything for money. To spread a lie would be harmless and it would bring them some income. So, i think it would be okay to set up camp somewhere around laguna blanca or laguna verde. Not too close to the park adm or the hut of course. Thank you Bruno for the info! 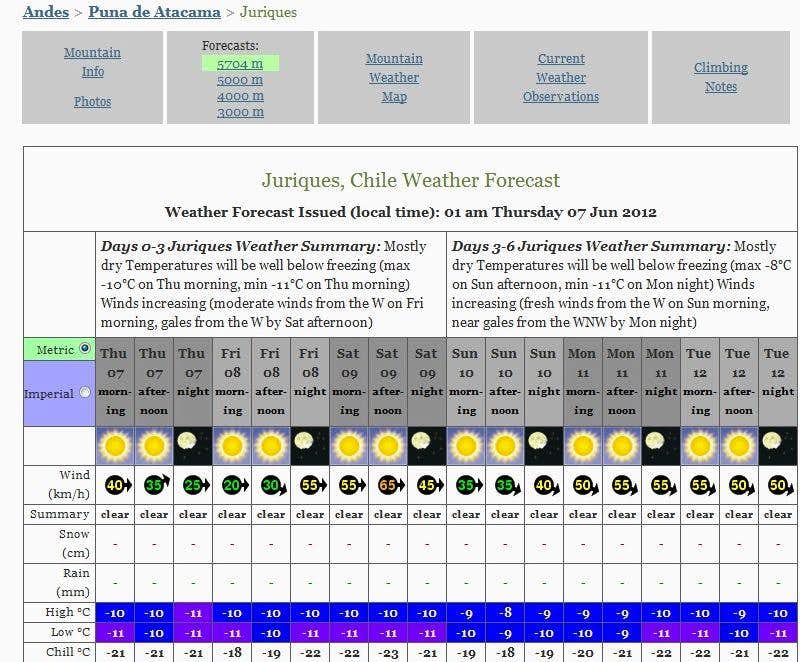 INFO FOR THE VOLCANO BY ANOTHER USERS

My friends from SP, if you climb the volcano, please let me know about fresh new info about routes, fees, or any other important facts that we could add here to improve the mountain page.

All the credits are gonna be visible here, of course.