Aiguille du Chardonnet is an imposing summit, even if it does'nt reach the 4000 m, belonging to the Mont Blanc Massif. It's situated  in the French side of the massif, not far from the Swiss border. The Aiguille du Chardonnet is a classically beautiful mountain. From across the Chamonix Valley in the Aiguille Rouges group, the Chardonnet appears to be a symmetrical, steep sided pyramid. From the opposite side, that of the Albert Premier Hut, it loses its symmetry but not its attractiveness. The South face is rocky and complex with difficult routes. The North face is icy and dominates the Tour glacier.

There are no easy routes on this peak. The Normal route is steep and intricate. It is not a "peak baggers" mountain. The popularity of the Chardonnet comes from its fine climbing, clean rock, fantastic views (especially to the west into the Argentière Glacier) and exposed ridges and buttresses.
The normal route is the W ridge, anyhow the two most famous routes are the Eperon Migot and the Arête Forbes.
Aiguille du Chardonnet is steep on all sides and the descent is no give away. Sometimes poor conditions and gaping bergschrunds can make this harder than the ascent itself.

You can access it from either France or Switzerland.

From France the best hut to go to is the Cabane Albert Premier. To get there you must get to Les Tour at the top end of the Chamonix Valley. From Les Tour you have two options Either take the lift up to 2200m or start from the Village. Both possibilities are on well marked trails, personally I take the lift.

From the Swiss side you must access the Cabane de Trient. Which can either be done from the village of Trient in the Trient valley, situated between the Col de Forlaz and the Col de Montet on the road from Martigny to Chamonix. Or from a Village called Champex situated above Orsières. Once again the Champex option is most often prefered due to the possibility of using the lift system. I call it Free Vertical. Both these options are on well marked trails. 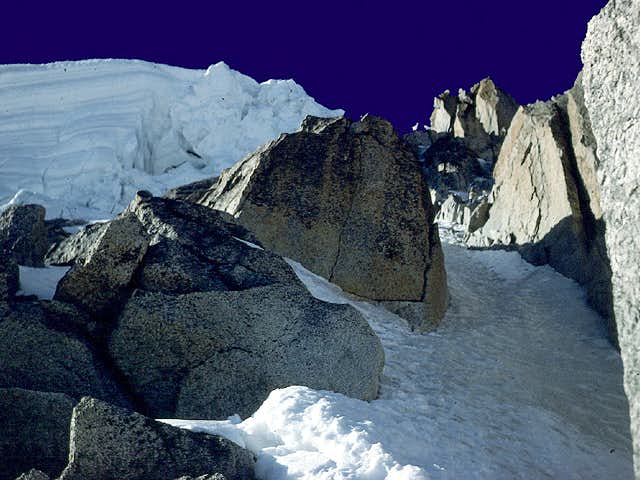 Eperon Migot, the rocky zone in the middle

This is a great climb. There are a handful of routes in the Alps which, each within their grade, are generally considered to be the best of the range, and the Forbes is certainly deserving of this distinction.
A traverse of the Chardonnet from east to west via the Forbes Arête, is a climber's fantasy: a glacier approach; steep snow and ice to the ridge; snaking and winding over and around towers of solid granite in an unbelievably scenic setting; followed by a technical descent back to the glacier.
6 h from Trient Hut

The North Buttress is slightly harder than the Forbes Arête and is a good introduction to the longer mixed routes of the massif. This route is considered by someone to be one of the best mixed routes in the Alps - 6 h from Trient Hut

Comments about the descent routes :
Author: codrambler
Date: Sept 22, 2004 10:43 AM
Give yourself plenty of time for descent. Be at summit by 0800 if poss. as about 1000 the sun comes onto the lower descent, melts the surface, vanishes round the corner and the surface can turn into bottle hard ice!

None really. Seasonal Closures, yeah the lifts shut down in the off season, but the huts always have an open door.

From June to October

Camping and other accomodation

In addition to the mountain huts there is plenty of accomodations in Chamonix Mont Blanc, a primary destination offering several possibilities (hotels, huts, gites, renting rooms). Numberless campsites are situated both in the Northern and Southern ends of the town.