It's named Les Courtes a mountain located in the French side of the Mont Blanc massif that feature a prominent and high North face which is a great action ground for ambitious alpinists in ice ascents and extreme skiers. The South side is somewhat friendlier and is more frequently climbed. The name Les Courtes means "short ones" and the reason is because they appear to be a bit shorter than the Droites,  which are just situated to the right of Les Courtes when looking at the walls from the valley. Actually the name seems to be quite playful because the mountain is instead impressive, with high and majestic walls especially on the side of the Glacier d'Argentiere.

The mountain is located between the Talèfre Glacier basin and the Argentiere Glacier basin along the ridge that starts from the Aiguille de Triolet to the Aiguille Verte via Les Droites. Particularly demanding from a mountaineering point of view is the North wall facing the Argentiere glacier. The culminating summit has an altitude of 3856 m.  In addition to the main summit, the mountain has several other summits: - Tour des Courtes - 3.816 m - West shoulder 3.841 m - Aiguille Chenavier - 3.799 m - Aiguille Croulante - 3.765 m - Aiguille Qui Remue - 3.724 m To approach the mountain,  it is possible to use the Refuge du Couvercle  (South side) or the Refuge d'Argentière (North side),  depending on which side of Les Courtes you want to climb.

The closest International Airport for this region is Geneva. The starting points for climbing are both the town of Chamonix and the village of Argentière.

Depending on the side you want to climb, you either start from

For more Details see the Approach to the Huts section below.

All these routes are better climbed in spring or early summer. In fact because of the global warming that makes this wall very dry during the summer season, the current trend to climb these routes is to do it in spring or at most at the beginning of summer, using skis for approaching and sometimes also for the descent. 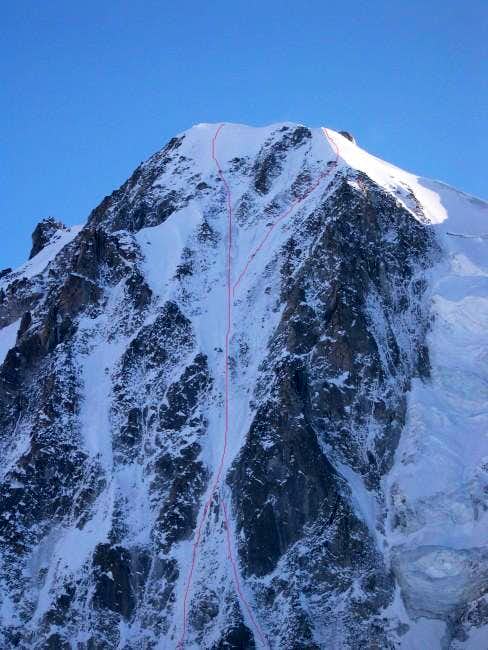 The most challenging route of the wall. Before the introduction of modern ice climbing equipment, it was considered one of the most difficult North wall in the Alps.  It is still one the classic ice-climb and highly recommended.

Approach: The face is approached from the refuge d'Argentiere in about 1 or 1 and a half hours to the base of the bergschrund.  Another option is to aprroach by ski in from the Grands-Montets cable-car upper station.

Cross the bergschrund on the North Face proper and climb the first third of the face straight up to where the couloir narrows: first on steep snow 50°/55° and then on ice to 70°/75°for about 60 meters at the end of the first third of the wall.  Above this ice crux section the couloir widens and the angle decreases back to 50°/55° ice and hard snow with a second wall at 65°for about 20 meters. There are two possible endings in the upper section, either exit right and join the NNW ridge to the summit or go straight up to the summit for the steeper exit option.

Descent: the more common exit is to descend on the back (South side) via the Normal Route to the Talefre glacier and then to the refuge du Couvercle (many crevasses). 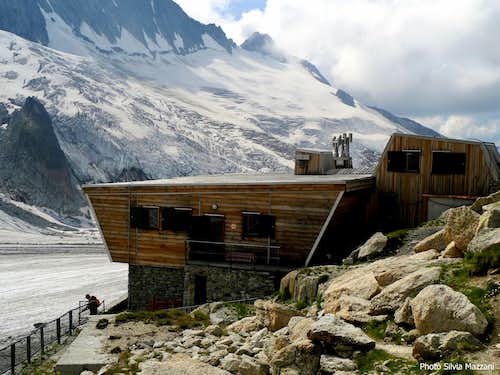 The refuge is placed at an altitude of 2687m on a balcony dominating the "Mer de Glace". The new refuge was built recently to replace the legendary old shelter made of sheet metal placed under a huge slab of granite as a shell (from that the origin of the name which literally means "shelter of the lid"). Its location allows the approach to all the peaks that surround the Talèfre basin, or as a rest for who come from the Argentiere side. In addition to this, it is situated in a location wherefrom the view of the mountains around is one of the most fine in the whole alps arch (Aiguille Verte chain, North wall of Grandes Jorasses and Mont Blanc massif). For this reason it is reached even without mountaineering purposes. Hut's phone:  +33-0450531694

The Refuges should be reserved during most parts of the year.

Approach to the Huts

To the Ref. d'Argentiere There are 3 choices (depending on your time and energy)

To the Ref. de Couvercle

Hotels: Plenty in Chamonix and Argentiere, prices rather steep.  Chamonix is a primary destintion, offering several accomodations (hotels, huts, gites, renting rooms). Numberless official campground are situated both in the Northern and Southern ends of the town.

Camping on the Mountain can be done, but try not to annoy anyone.

A real winter ascent would be quite hard, but the conditions e.g. even beginning of November 2001  were just fine.The North Face is steep enough that not too much snow is sticking to it, but not as  steep as the Droites. After a strong snowfall, you should wait for the next time it gets a little warmer,  and the first avalanches will clean out the face again.

Mountain Conditions and other useful information

Climbed the huge colouir with crampons (10.march 2003). Good snow until about above midway, but hard ice and some rocks for the last 100 height meters (left our skis here). Skied down ! An awesome experience ! The steepness is between 45 and just above 50 degrees. Only to be skied/climbed in good snow conditions.