Coal Creek Canyon Park is a collection of 3692 acres of Jefferson County open space lands that center around Coal Creek Canyon (CCC) near Golden, Colorado.  CCC Park, cumulatively, is the second-largest open space park in Jefferson County, with White Ranch being the largest.  The seven separate parcels of open space that comprise the park are too convoluted due to surrounding private property to geographically describe in words (map provided below).
I recommend picking up the "Boulder, Golden" trails illustrated map by National Geographic to figure out the exact borders.  However, much of the surrounding private property comprises of insanely steep and rocky ridges and gullies that simply cannot be developed.  Because of this, I consider an area much larger than the prescribed park boundaries to be accessible to hiking and climbing.  In fact, the best climbing and peak bagging is just outside the park boundaries.  Just make sure to Leave No Trace.

Coal Creek Canyon Map
Why would anyone want to hike or climb in CCC?  There are so many great trails in the foothills of Golden and Boulder, why go anywhere else?  It is precisely the fact that the trails in Golden and Boulder are so busy that lends desirability to hike in CCC.
This area is vastly overlooked when compared to surrounding areas, undoubtedly due to the lack of designated trailheads or official trails.  Almost all hiking here, with the exceptions of west of Plainview Road and south of HWY 72 near the train tracks (with these being mere "social trails"), is devoid of trails.
This place is not for everyone; it appeals most to scramblers, peak baggers, and solitude seekers.
Below are the attainable summits around Coal Creek Canyon Park:
1. Blue Mountain        9322 feet
2. Crescent Mountain  8945 feet
3. Point "8801"           8801 feet
4. Coal Creek Peak     8484 feet
5. Jack's Peak            8452 feet
6. Point "7940"          7940 feet
Although the peaks here don't grace any worthwhile peak bagging lists (Blue Mountain as the 10th highest Peak in Jefferson County is the only notable mention), they are all are amazing climbs.  Of all the summit scrambles in the foothills near Denver, none are as fun nor prolonged as those of the peaks surrounding CCC.
Coal Creek Peak, at 8,484 feet, is the second-tallest mountain (after South Boulder Peak) that rises directly from the plains of the Denver Metro Area. To gain the summit, you must climb at least a solid 1000 feet of class 3 difficulty.  In between Coal Creek Peak and Crescent Mountain is a sub-summit referred to as "Jack's Peak" at 8452 feet.
Although you can summit Crescent Mountain (8945 feet) from the easier west side (all on CCC Park land), climbing the southeast ridges entail 2000 vertical feet of intense, sustained class 3-4 scrambling--in less than a mile.  There is nowhere else around with a mountain face like this.  Point "7940", south of HWY 72, is a fun climb, with beautiful slopes and meadows giving it a more gentle nature than Crescent or Coal Creek Peaks.  Rising more than 300 feet northwest from its saddle with Crescent Mountain, the unnamed point at approximately 8800 feet is also a great climb.
And finally, 9322 foot Blue Mountain.  While not in CCC Park, Blue Mountain lies on protected state lands just south of Chapel in the Hills, and is, in my opinion, the crown jewel of this area.  Its summit views are unparalleled by any other peak in the foothills of the Front Range.
What if peak bagging isn't your thing?  What if you are tired of the crowds and want to experience nature in solitude?  Well, you have come to the right place.  I won't divulge any secrets, but there are treasures in every section of CCC Park and the surrounding areas.  Just park your car, and explore.  I'd be surprised if you saw another soul. 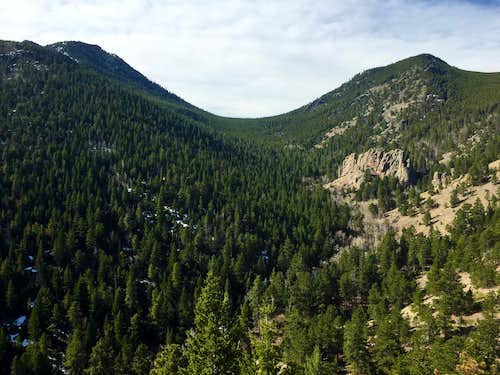 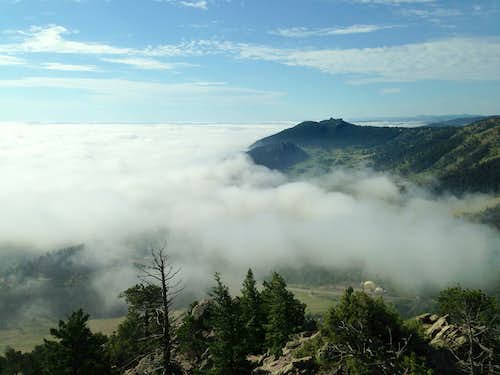 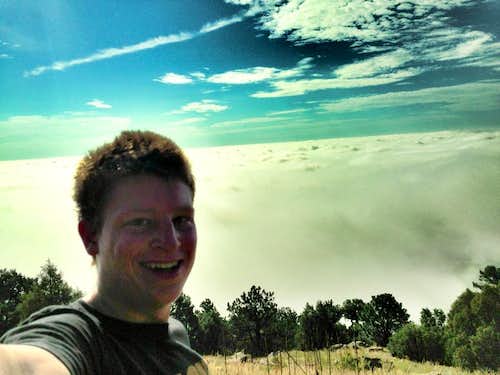 From Coal Creek Peak looking east over the sea of clouds. That was a day I'm sure never to forget. 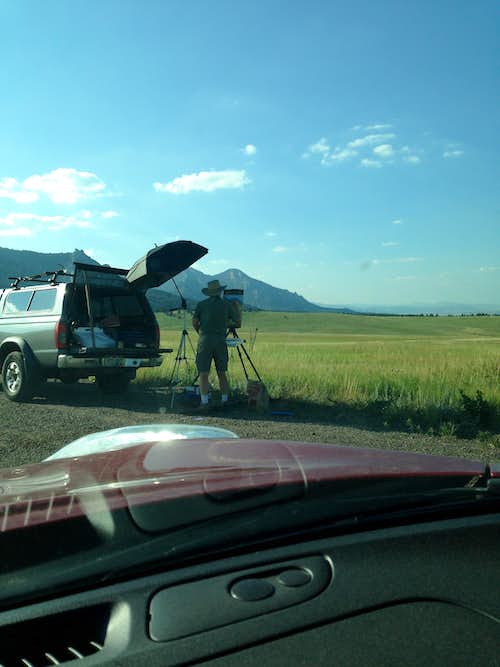 Many of you, I realize, are locals that might be interested in a brief history of this beautiful canyon. Everything that follows is excerpted from Vicki Moran's excellent book Coal Creek Canyon Colorado:Tales from Times Past.  Enjoy!
Cultures in Conflict
"During the early to mid-1800s the Colorado Front Range was the territory of Native Americans, including the Southern Arapaho, Southern Cheyenne, and bands of nomadic Mountain Ute. The Coal Creek area was probably used for hunting and as a gateway to established Indian trails through the Rock Mountains. Toward the beginning of non-native western expansion, the 1851 Treaty of Fort Laramie reaffirmed the rights of the Arapaho and Cheyenne to the land between the North Platte and Arkansas rivers, which included the land at the base of Coal Creek Canyon.
Following the discovery of gold in the Rocky Mountains at Pikes Peak in 1858 and in Gilpin County in 1859, non-natives flooded into the region. By 1861, newcomers and Indians vied for the limited life-sustaining resources and relations between the settlers and Indians were stressed to the limit. Colorado Territorial officials, led by Governor John Evans, pressed federal authorities to remove all Indians from the area. In response, Commissioner of Indian Affairs A. B. Greenwood negotiated the Treaty of Fort Wise, which forced the relocation of the Arapaho-Cheyenne from the Front Range to a small reservation in eastern Colorado--the site of the 1864 Sand Creek Massacre--where Colorado Territory militia brutally attacked the Arapaho Cheyenne, killing up to 163 people; about two-thirds of whom were women and children.
By 1864 the Ute were relocated to the Uintah and Ouray reservations in Utah, and in 1883 several bands of Ute agreed to settle on the White River Agency near Meeker, Colorado.  Native Americans from various tribes continued to roam the Front Range and to act as scouts for a while, but the newcomers now ruled the land.
Still visible today on the flat land east of Plainview Road are numerous circles of boulders believed to be tepee rings. They are evidence of Native Americans who once camped along Coal Creek. Early settlers in the 1860s reported occasionally seeing Indians perched on hillsides, quietly watching them pass by.
Beginnings of Settlement
Prior to the 1870s, Coal Creek Canyon was home to just a handful of settlers. According to the 1870 federal census, 57 people lived in the Coal Creek Precinct. Common occupations listed for men were teamster, farmer, sawmill worker, and laborer. Eight women were listed as "keeping house," and twenty children completed the count.
Ramboz Wagon Road and Coal Creek & Black Hawk Wagon Road Companies
In 1866 the Canyon served as a supply route to the mines in Gilpin County and a stagecoach route to Gato (today's Pinecliffe). The Ramboz Wagon Road and the Coal Creek & Black Hawk Wagon Road were the toll roads that started at the base of Coal Creek Canyon.
Ramboz Wagon Road Co.--January 1, 1866. From where Coal Creek emerges from the mountains in Jefferson County, up said creek for a distance of 10 miles.
Coal Creek & Black Hawk Wagon Road Co.--February 2, 1866. From Rand's Sawmill at mouth of Coal Creek Canyon, Jefferson County, then on either side of Coal Creek west 5 miles to forks, then up south of left fork to top of divide between Ralston and Coal Creeks, then along divide to near Starr and Coopers Ranch, then west thru a depression in Bare Mountain to point near Thomas' Sawmill in Gilpin County, then west to near Walling Sawmill, the west by the waters of the east fork of Missouri Gulch, by route to North Fork of Clear Creek, then down North Fork to Black Hawk...From Denver, the approach to the road followed present 80th Avenue.
A toll was paid at the Coal Creek gate: a vehicle and one or two animals, 75 cents; additional teams, 15 cents; horseman 10 cents; pack animals, 10 cents; loose stock, 5 cents a head; sheep and calves, 2 cents a head. Another toll was due upon arrival at the foot of Dory Hill in Black Hawk.
Coal Creek District Road
In 1883, Jefferson County Commissioners surveyed the road up Coal Creek Canyon and agreed to maintain it. When the creek flooded and washed out the road in 1894, the county responded by hiring residents as overseers for $1.75 a day to rebuild the road at higher elevation than the creek bed and to maintain it.  Two road overseers were Nels Bengson in 1894 and Charles F. Wilson in 1909.  Overseers continued to maintain the road using a plow pulled by a team of horses. Two lines of boulders pushed in place by the plow can be seen on the northwest corner of Highways 72 and 93. It wasn't until around 1919 that Coal Creek Road [present day HWY 72] was improved enough for automobiles use."
The rest, as they say, is history.

From Golden, take CO 93 north approximately 8 miles and turn left (west) on HWY 72.  From this intersection, the parking area off of Plainview Road is a right turn 1.7 miles away.  The various turnouts are all along HWY 72 in between Plainview Road and Chapel in the Hills.  The Chapel is a right-hand turn approximately 5 to 6 miles from the intersection of CO 93 and HWY 72.

There are no designated trails.  While hiking here, you should be familiar with how to travel cross-country and what that entails.  Because all hiking will usually be out-and-back hikes up adjacent valleys or mountain climbing outings, it's hard to get lost.  For the most part, you'll have some views of your car along your hikes or climbs, and a map really isn't necessary.  However, I highly recommend you wear long pants when hiking here off-trail.  I know first-hand how much it sucks to get dozens of bleeding cuts on your legs; and yes, some areas of Coal Creek Canyon have heavy undergrowth and deadfall like this.
If climbing Blue Mountain, you will likely run into several private property signs south of HWY 72.  Blue Mountain itself is on protected state land, but the land in-between it and HWY 72 is labeled as a "conservation easement" over private property. Take from that what you will.

This is strictly a day-use area.  According to Jefferson County Open Space regulations, "C.22. Camping: It shall be unlawful to camp overnight, or to park any vehicle, trailer or camper for overnight camping purposes, on Open Space lands except by permit in areas designated for camping, or to camp or park a trailer or camper in such a designated area for a period of time in excess of the posted or permitted limits."
There are no designated camping or parking areas in Coal Creek Canyon Park, so please only stay here for the day.

You put a lot of good effort into this page, but you are remiss to encourage people to visit without noting that pretty much the entire area, including most of the summits you highlight are closed to public access. This isn't to say this is heavily enforced, but it's still best to arm your readers with all the facts. See the map on this page: https://www.jeffco.us/1203/Coal-Creek-Canyon-Study-Area