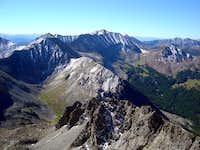 This page is under construction. Please attach your favorite images and any other information you think this page should have.

The Never Summer Range is ten miles long and runs from Cameron Pass in the north to Ruby Mountain in the south. The peaks are a continuation of the pink granite line of the Rawah Peaks to the north. The range gets its name from the translation of the name the indiginous Native Americans (Arapahoe Tribe) used for the area. The cloud names of some of the central peaks were the idea of James Grafton Rogers (a founder of the Colorado Mountain Club). 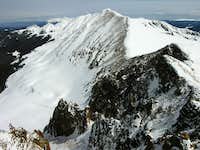 The range can be thought of as three distinct pieces. The northern section contains the range's highest peak (Mount Richthofen) and is characterized by the rugged cirques containing Lake Agnes and Snow Lake.

The central section is the long straight spine of peaks that run from Mount Richthofen south to Baker Mountain. This section is characterized by generally rotten rock and long, talus slopes falling from the major north-south ridge line.

The southern section of the Never Summer Range is staggered a little bit to the west of the central section and consists of curving ridge that runs from Parika Peak south to Ruby Mountain. 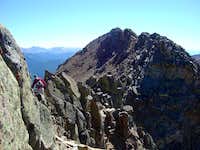 The northern section of the Never Summer Range is largely contained within the Colorado State Forest.

The central section forms the boundary between Rocky Mountain NP on the east and Never Summer Wilderness to the west.

The southern section of the range is contained within Never Summer Wilderness.