UPDATE - Wildfire in the Mummy Range

As of December, 2020, the Cameron Peak Fire is 100% contained. This fire burned 208,913 acres. Areas affected include the Comanche Peak Wilderness and the northern reaches of Rocky Mountain NP. In addition, the Troublesome Fire burned 193,812 acres, some of which were on the west side of RMNP. That fire jumped the Divide causing additional damage on the east side into the Moraine Park area. Check with Roosevelt National Forest and/or Rocky Mountain National Park for current conditions, closures. Located in Northern Central Colorado, the Mummy Range extends northward from Chapin Pass in Rocky Mountain National Park (RMNP) approximately 20 miles to the Cache La Poudre River. The southern half of the range lies within RMNP while the northern half is contained within Roosevelt National Forest and the Comanche Peak Wilderness. Most climbing opportunities are found in the RMNP portion of the range where 15 summits exceed 12,000 ft.

Origin of the Name From: Cache La Poudre: The Natural History of a Rocky Mountain River. 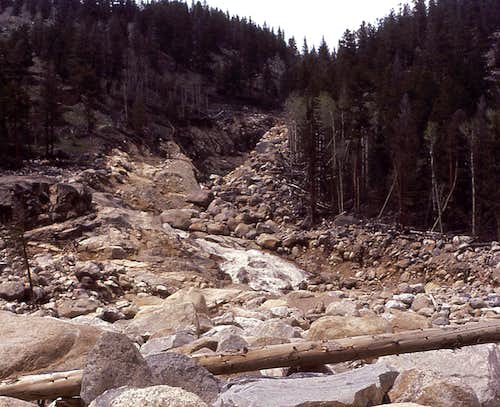 Major erosion from the Lawn Lake Flood. When 30 million cubic feet of water came downhill in a hurry!

The name “Mummy” seems singularly inappropriate for that imposing range, visible as it is for many miles to the east and to the north and to the south. Early visitors apparently saw a resemblance to a reclining Egyptian mummy. The Arapahoes called them nooku-bee3ei-no which translates to “White Owls”. It is not certain who first called them the Mummies - it may have been Albert Bierstadt, who visited the area in 1876.Unique Features-Due to it’s relative remoteness and, for the most part, long approaches, the range sees fewer visitors than most areas of the Park. In contrast to RMNP as a whole, most access points, other than those in the extreme southern portion of the range, are somewhat far-flung and reachable only by lengthy drives on unpaved roads.Winter access is good in RMNP with the exception of the Chapin Pass trailhead. In the northern part of the range, Winter access is limited due to seasonal road closures. See the trailhead list below for more detail. 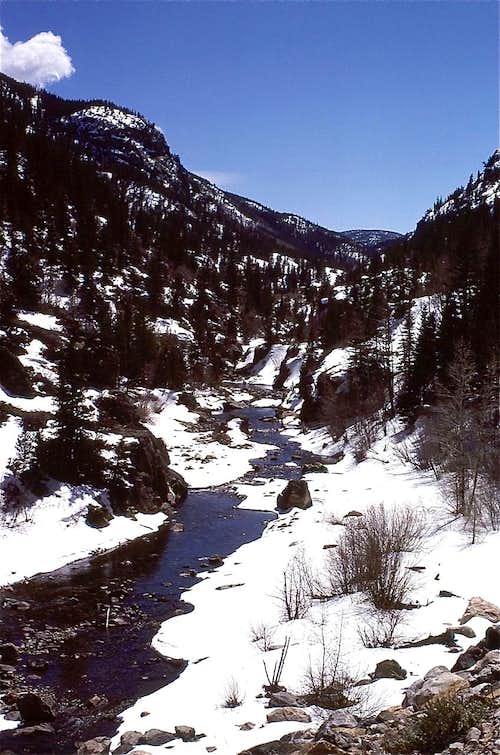 Cache La Poudre River. This spot was featured in the opening scenes of Centennial with Pasquinel and McKeag crossing here on horseback.

On July 15, 1982 the Lawn Lake Dam collapsed, causing 30 million cubic feet of water to race down the Roaring River at a rate of up to 18,000cfs as it dropped 2,500 feet to Horseshoe Park below. From there, the flood waters continued down the Fall River, obliterating a small dam before the waters slammed into Estes Park. The alluvial fan created by the flood waters is plainly visible today. A hike up the Lawn Lake Trail still reveals the power of that flash flood of more than 30 years ago. Lawn Lake/Roaring River FloodOn June 3rd, 1944, a B-17 Bomber with a crew of 10 crashed high on north-facing slope in the northern reaches of the Mummy Range. Six crewmen survived the crash. The crash site is accessible by trail. The western, northern and north-eastern limits of the range are marked by Colorado’s only Designated Wild and Scenic River-The Cache La Poudre. 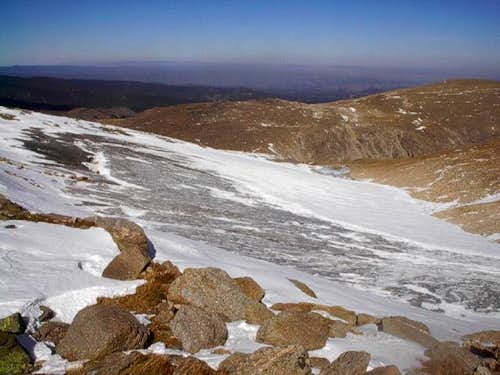 The Mummy Range was formed during the Laramide orogeny, which began about 70 million years ago and lasted approximately 30 million years. Multiple faults in the area were thrust upward, creating the beginnings of the range. After a period of much volcanic activity, 25 to 40 million years ago, the range and surrounding areas were buried under a thick blanket of volcanic ash. Over the last 25 million years, the range continued to rise, reaching it’s current elevation in the last few million years. All the while, the power of erosion sculpted the canyons and valleys. Climate changes beginning 1.8 million years ago changed the engine of erosion from water to ice and the era of the glaciers began. The range shows much evidence of glaciation in the past but only remnants of the great glaciers are left today. Rowe Glacier, between Hagues Peak and Rowe Peak and a few “permanent” ice/snowfields are all that remain.See Glaciers of Colorado for more info.

This portion contains the majority of the range’s high peaks, including all of it’s 13ers and the highest summit in the Mummies, Hagues Peak at 13,560 ft. Elevations range from 8,000 to over 13,500 feet. 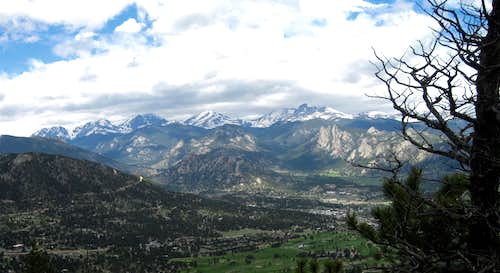 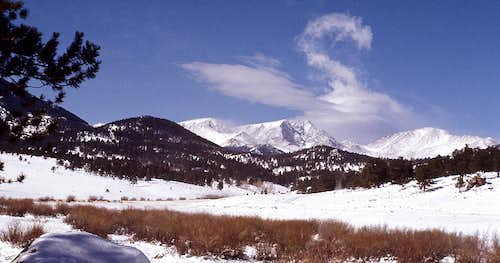 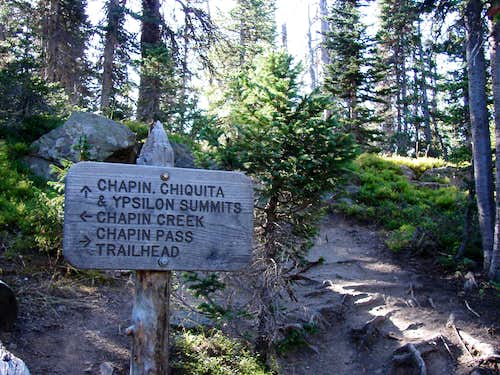 Start of the trail to the summits.

Trailheads: Chapin Pass-Primarily provides access to Chapin, Chiquita and Ypsilon. Also is the normal starting point for what’s known as Mummy Mania. This trailhead is usually accessible from early July until the first snows of Fall. Parking is very limited! 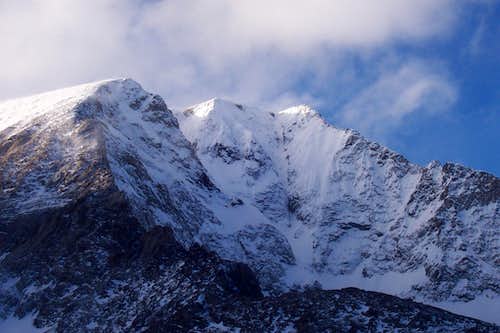 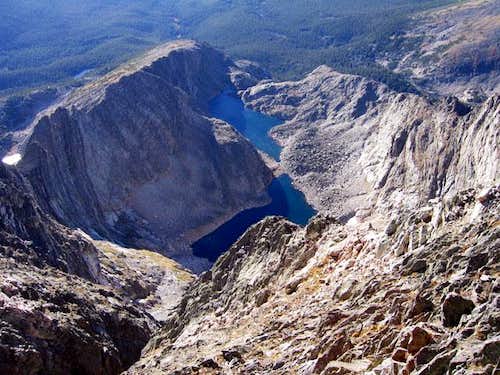 Spectacle Lakes viewed from near the summit of Ypsilon. The left-hand ridge is Blitzen Ridge, and the right-hand is Donner Ridge. September 18, 2004 ~ Photo by RyanS 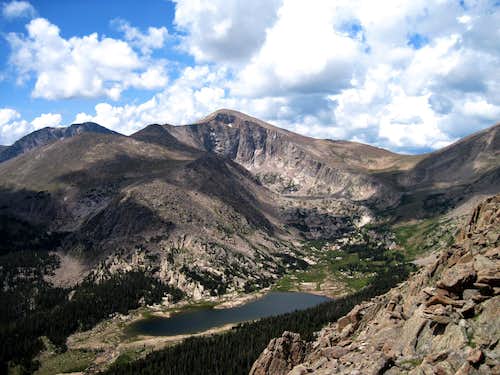 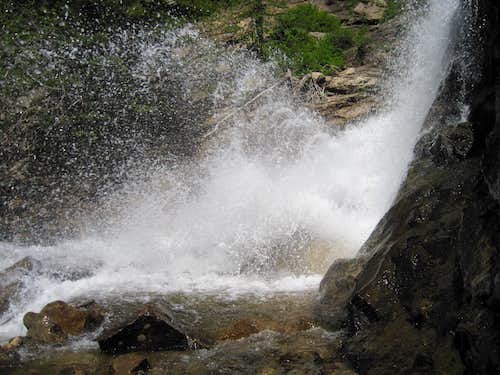 point for the range’s higher peaks but does provide alternative access to the above mentioned Black Canyon trail and the North Fork/Lost Lake trails via the North Boundary trail. A few backcountry campsites are located along Cow Creek. This trailhead is normally accessible year round. Parking is very limited.Accessible Peak:Sheep Mountain 9,794 Dunraven-Provides access to the headwaters of the North Fork of the Big Thompson via the North Fork and Lost Lake trails. Additionally, the Stormy Peaks trail affords access to the Comanche Peak Wilderness and Roosevelt National Forest, in the northern half of the range. A number of backcountry campsites are scattered along all three trails. This trailhead is normally accessible year round. Parking is available.

The northern part of the Mummy Range is located outside RMNP, except for the extreme southern portion. While there are many miles of trails to hike in the northern Mummies, climbing opportunities are limited and primarily located on or near the northern boundary of RMNP. Additionally, a few peaks over 11,000 are found to the north and northwest of Comanche Peak. Elevations range from 8,000 to 12,700 feet. 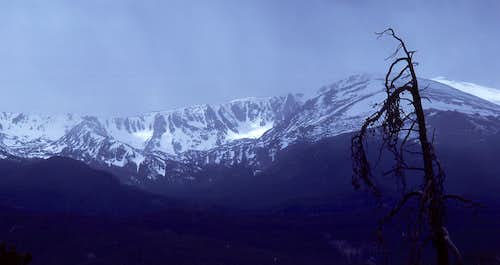 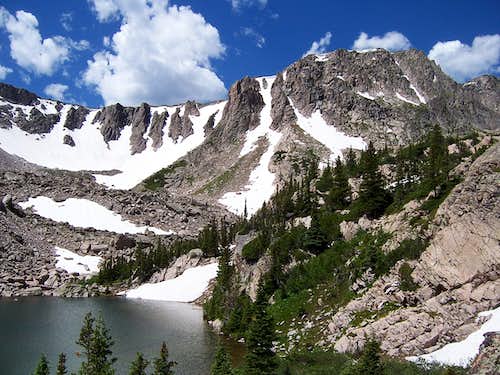 Accessible peaks include:Comanche Peak Point 12,716Point 12,308Corral Creek-Provides access to the Mummy Pass area as well as the upper reaches of the Cache La Poudre River. Access is seasonal, parking is limited.Accessible peaks include:Comanche PeakPoint 12,716Point 12,308Desolation PeaksCamping options:Plenty of choices here, from backcountry sites in the Comanche Peak Wilderness, to NF CGs like Jack's Gulch and Long Draw, to dispersed camping in some areas along the forest roads.