Coal Creek Peak is a mountain that stands right along the edge of the Front Range, in between Boulder and Golden, Colorado. Like its neighbor 1 mile to the west, Crescent Mountain, Coal Creek Peak has no trail to its summit. Due to its conical shape and more-or-less consistant steepness on all sides, the peak can be bagged from almost any side, providing about the same level of difficulty. There are two prominent ridges that rise to the summit, the South Ridge and the East Ridge. Both offer about the same amount of vertical gain, with the East Ridge being slightly longer. The slopes of this peak are very easily accessible off Highway 72 in Coal Creek Canyon and can be bagged in conjucntion with Crescent Mountain and Jacks Peak. Because route finding here is pretty non-trivial (unlike the complex Southeast face of Crescent), I feel there is no need for a separate route page. Below are details on the South Ridge route, an enjoyable ridge scramble that ascends about 1700 feet in less than 3/4 of a mile. At the summit you will find a nice 360 view of the surrounding area, with a unique view of the Denver Basin, and a USGS benchmark. Coal Creek Peak is an ejoyable outing, with or without a side trip to Crescent and Jacks. 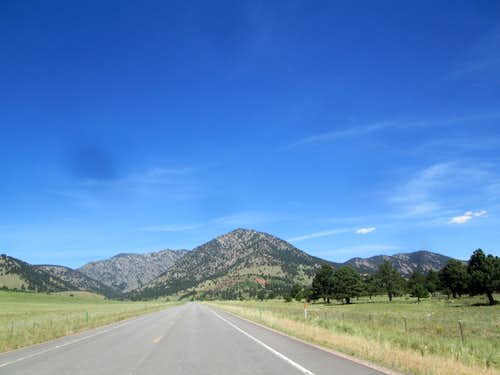 View of Coal Creek Mtn from Highway 72, a little west of the Highway 72/93 intersection.
The base of the peak runs along Colorado Highway 72. From the intersection of CO Highway 93 and Highway 72 (7 miles north of Golden and 8 miles south of Boulder) head west on 72. Coal Creek Peak will be plainly visible in front of you. About 2.8 miles from the traffic light intersection, there will be a large pullout on the left (south) side of the road. This provides a nice place to park. Keep in mind that if you are going to also tag Crescent on your hike, you probably won't end back up here. More likely you'll be about a mile up the road when you come off Crescent. 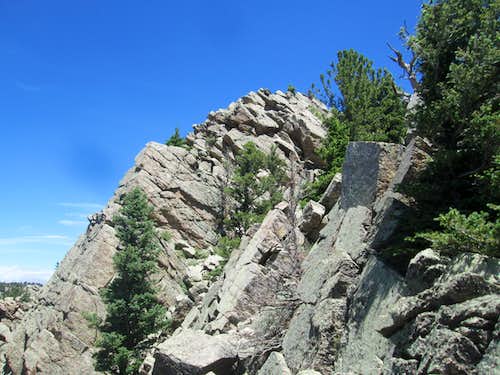 This is a typical section you will encounter on the upper stretches of the South Ridge.
The pullout as described above is a nice place to start up the South Ridge of Coal Creek Peak. Cross the road, hop a fence, and immediately start slogging up the hillside. Yucca, cactus, and grasses slowly yield to rocks and pine trees the higher you get. You will see a fence off to the left that runs in a north-south direction. Follow the fenceline until it ends, and this is the bottom of the ridge proper. Here rocky outcrops occupy the ridgeline. Scramble up outcropping after outcropping, and if the rock gets too steep, you can easily avoid it on either side of the ridge. Keep heading north along the ridge, over a few false summits until there is no more mountain left to climb. Re trace your steps back down to the road
or
From the summit, head off in a northwesterly direction, down to a saddle at about 8000 feet, then up a couple of unranked humps, and finally to the summit ridge of Crescent Mountain, turning back to the south. Crest Crescent and thrash down the steep SE Face back down the road, and walk or hitchhike back to your car.
Stats (approximate):
Roundtrip for South Ridge only to Coal Creek Peak summit: 1.3 miles, 1700 feet gain.
Roundtrip for South Ridge, plus Crescent Peak: 4 miles, 2800 feet gain. 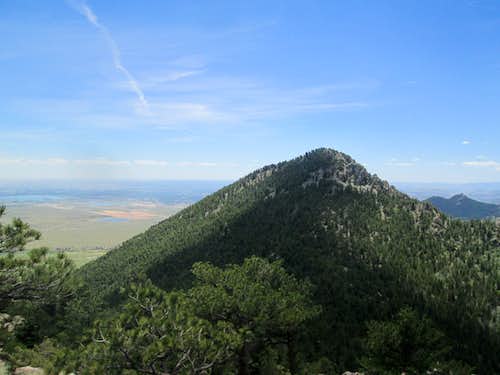 Closer view of Coal Creek, from the ridge heading to Crescent Peak.


Kinda tricky. Judging from this map, only the very bottom of the South Ridge route is on Jeffereson County Open Space land. Everything above that, and apparently most of the mountain itself, is on private property of some kind. There is some confusing signage on the north-south running fence found at the bottom of the ridge that indicates both sides of the fence are private property, which is not true, according to the JeffCo map. Everything east of the initial fence line is Open Space property. However, once the fenceline ends, it presumably goes into private property. That said, I didn't see a single sign anywhere indicating this. Given that the route is not close to any dwelling and pretty infrequently traveled, I would imagine there would be no issues running into anybody yelling at you to leave. 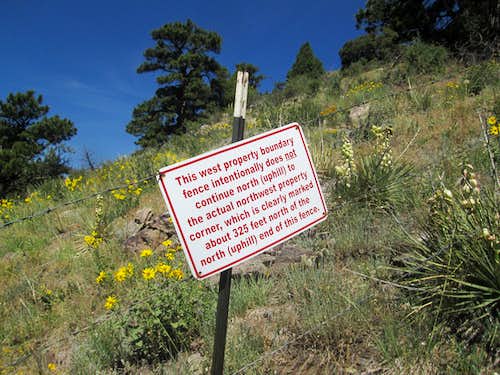 Found on the fence that runs parallel to the ridge at its base. Not really sure what this sign is trying to tell me. Probably the most strangely worded sign I've encountered on a hike.

Pretty much any time of the year.