The Boulder Range is composed of four major summits and 81 minor summits, all within the confines of Boulder and Eldorado Springs, Colorado. While technically members of the Front Range, these peaks separate the high plains to the east from the jumbled canyons and hills rising up to the Indian Peaks Wilderness on the Continental Divide. In the space of three miles, the terrain rises from the flat prairie at 5500' to summits at over 8000'. Few other places in the world is the transition from plains to mountains as abrupt and obvious. This is largely due to a great, tilted block of Fountain and Eldorado Formation sandstone which forms the peaks and the world-famous Flatirons formations which cover the eastern side of the range. The northern and southern boundaries of the range are somewhat nebulous. For the purpose of this range, I have used Mount Sanitas as the northern boundary and Eldorado Mountain as the southern boundary.  Nearly every peak listed below lies within Boulder's Open Space and Mountain Parks or Eldorado Canyon State Park. 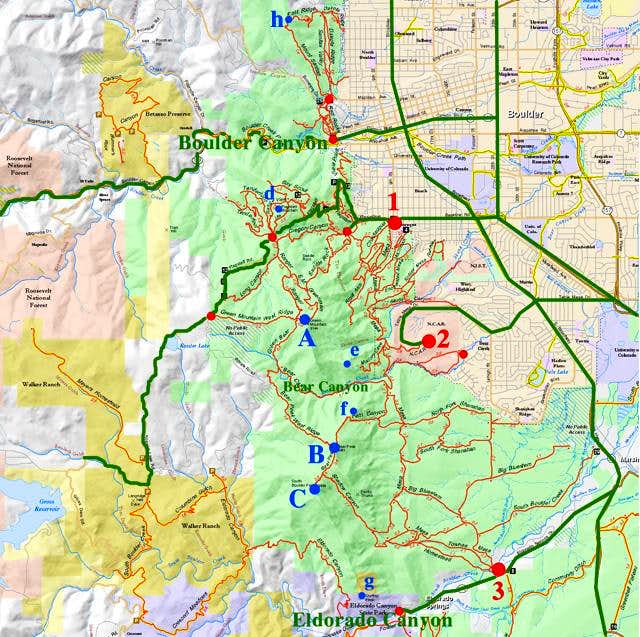 All of these summits have at least 300' of optimistic prominence & are listed from north to south:

The Boulder Range not only provides great hiking opportunities, but are also home to spectacular, world-class rock climbing. There are three principle venues for climbing in the Boulder Range, each of them remarkably different in style and geology.


From almost any point in Boulder, it's hard to miss the Flatirons, huge plates of red-grey sandstone tilted at a about 50o along the eastern side of Eldorado Mountain, South Boulder Peak, Bear Peak and Green Mountain. The east faces of the Flatirons are typically quite easy, runout climbing; 3rd class to 5.7+ or so. Harder routes, up to 5.13c, tend to be found on the north, south and west faces.  Those looking for long, casual routes could do worse than the east face routes on many Flatirons. The largest and most popular rocks are found on the northern end of the range as the First and Third Flatirons. The standard east face route on the Third Flatiron (5.4) has been described as "eight pitches of the best beginner climbing in the Solar System."  Similarly, high quality, classic routes exist on many less popular rocks such as Seal Rock, the Matron, and the many clustered Flatirons on Dinosaur Mountain.  Gerry Roach, guidebook author and Boulder mountaineer extraordinaire, has put forward a list of classic Flatirons climbs. Ten of these routes have been declared to be the ultraclassic list (all are 5.7 or easier) and a tradition of racing through the climbs has been established.  Linking these top 10 routes requires over 50 pitches of climbing, 13 rappels, over 12 miles of hiking and over 8000 vertical feet of elevation gain. The record trailhead-to-trailhead stands at under 7 hours.
The Flatirons not only provide hundreds of rock climbing routes, but also provide some ice climbing options as well. 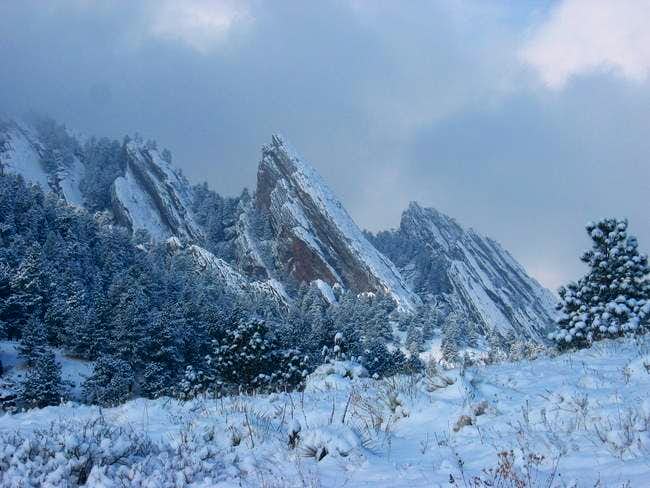 
"Eldo" as it is known is a deep slash through the Fountain and Eldorado Formation sandstone that forms much of the range. Eldo is an intimidating and storied place where trad climbing pioneer hardmen such as Layton Kor, developed cutting-edge routes and new techniques starting in the 1950s.  Innovation and popularity continue to this day; expect crowds on the classic routes.  Complete details of the hundreds of climbs at Eldo can be found in the Falcon Guide "Rock Climbing Eldorado Canyon".  A few of the more moderate ultraclassic climbs at Eldo include: Bastille Crack (5.7), Yellow Spur (5.9+), Wind Ridge (5.8), Great Zot (5.8+), Rewritten (5.7), and Swanson Arete (5.5).

Boulder Canyon
Boulder Canyon is not as famous or spectacular as the other two Boulder venues. A dozen or more crags of various sizes line the sides of the canyon along the Boulder Creek at the north end of the Boulder Range. The canyon tends to be fairly top-heavy with many short, hard routes in the 5.10-plus range, but there are a number of good moderate climbs as well. Unlike the Flatirons or Eldo, Boulder Canyon is predominantly hard granite and the climbs have a very different feel to them.  Boulder Canyon also provides a number of ice climbing routes.


Flagstaff is known for it's bouldering. The same gritty sandstone which forms the Flatirons to the south crops up in numerous small crags perfect for bouldering problems. Particularly famous are the Monkey Traverse and Beer Barrel Rock.

Yes, the Boulder Range does provide rare skiing opportunities after big storms. Chautauqua Mesa was once a ski area that was open intermittently from 1949-1963 and had one rope tow. The Ski Jump Trail is now an established hiking trail. In addition, the 1911 Gully on the Third Flatiron was skied by Boulder residents Bill Wright and Stefan Griebel. 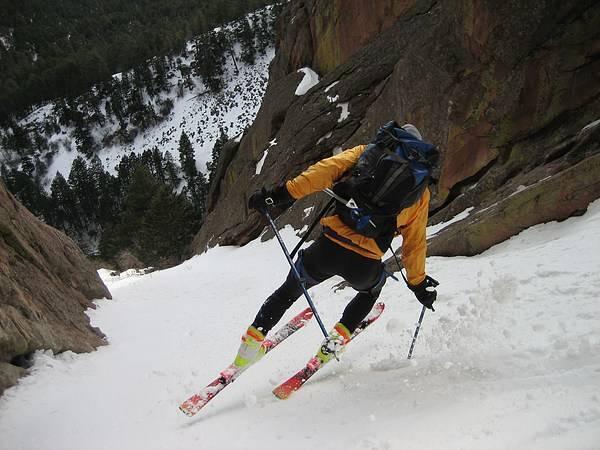 The Trailheads and Trails

I inherited this page from CharlesD on January 14th, 2014.