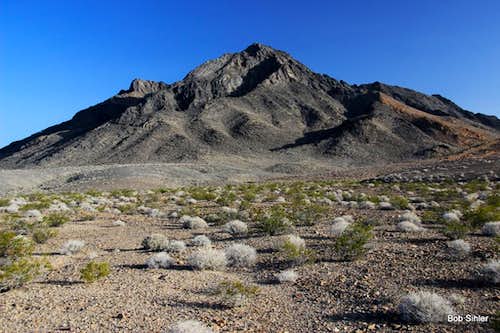 Eagle Mountain from the Southeast
As desert peaks go, this is one of the finest. You get a lot of bang for your buck. It's an easy and fun scramble, with a short approach, and it can be linked up with other peaks in the area for a rewarding day of desert peakbagging.

To those traveling through the Amargosa Valley of California/Nevada, Eagle Mountain (or Eagle Mountain #2, as it's also known) stands out as an impressive island in the middle of a vast sea of flat desert. From Stateline Road, which links Beatty, NV, with the tiny community of Amargosa Valley, CA, Eagle Mountain looms as a dark sentinel over blinding salt flats. This solemn peak stands alone, without a neighbor for several miles. For this reason, the summit views are extraordinary, giving one the feeling that one is much higher than he/she actually is.

Despite Eagle Mountain's proximity to Death Valley National Park and to Las Vegas, the mountain is infrequently climbed. Who knows why? The peak is easily accessible, being right off a paved highway, easy, gaining only 1800 feet in about 2 1/2 miles, and fun, boasting a rather interesting and nicely exposed Class 3 summit ridge.  Maybe it's the fact that it's not in a national park or other major recreational area and that it's along a lonely desert highway that most travelers just fly along in their trip from one point on the map to another.
North of the main summit is a rugged, lower summit. It is likely that very few have ever been to it. From between it and the main summit, the ridge leading to the lower summit looks quite challenging, but there appears to be an easier way from the southwest by leaving either the standard or the direct route (see subsection below).
Eagle Mountain is on the DPS Peaks List. But whether you're a list-chaser or not, this is a cool little peak very much worth doing. 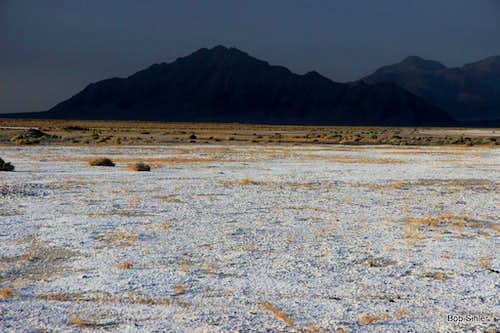 Eagle Mountain Across the Salt Flats

Although a number of potential routes exist, the easiest appears to be a Class 3 route from the west and it is the standard DPS route. This route is described on the attached "West Face" route page.
Another fine route, and originating from the same point that the standard route does, is the one described on the "West Face 'Direct'" page. This one is more challenging but more enjoyable, and rock quality is better overall, than the standard route. It requires negotiating some sections of Class 4 and may require some Class 5 as well depending on your exact route. Although it doesn't have to get harder than Class 4, it can.
If you're okay with some steep Class 4-low 5th scrambling, I highly recommend going up via the direct route and down via the standard one. 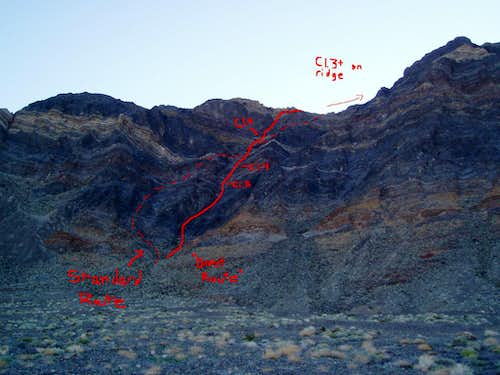 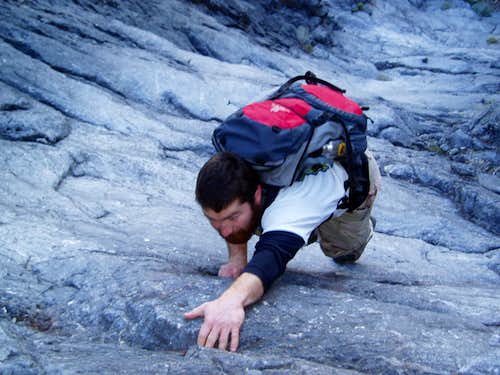 Eagle Mountain is easily reached by any passenger vehicle.

From Shoshone, California:
Head north on Highway 127 about 16 miles, looking for a faint dirt road heading off to the north just as the highway starts to angle to the northwest. Turn onto the dirt road and follow it 1/4 mile or so to a small dirt parking area. Eagle Mountain is immediately east. If you miss it, you are irreparably blind - there are no other mountains nearby.


2 options exist --
1) From Furnace Creek, take Highway 190 to Death Valley Junction and then turn onto Highway 127 and follow it south to the west side of Eagle Mountain (can't be missed-- remember, it's the only mountain in the middle of the huge Amargosa Valley). Look for the aforementioned dirt road turnoff.
2) From Badwater, head south for many miles and ultimately exit the park, crossing Salsberry and Jubilee passes, on Highway 178. When you reach the junction with Highway 127 (just north of Shoshone), turn left and head north to the aforementioned dirt road turnoff.
From Las Vegas:
Take SR 160 to Pahrump (takes about an hour). Just north of town, look for a sign telling you to turn left for Death Valley. This is Stateline Road, and by following it, you will reach a junction with CA 127. Turn left (south) here and drive to the turnoff. 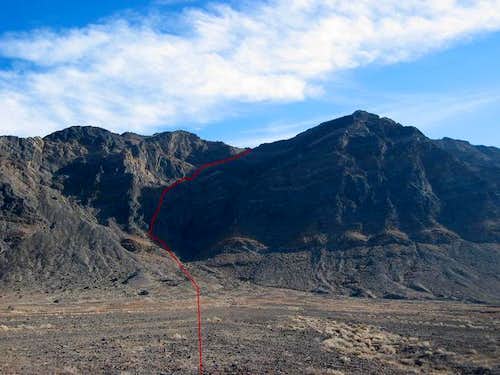 None. Eagle Mountain is on BLM land. There are no fees to speak of. Follow LNT principles, especially since this peak is in a designated wilderness.

October through April. Temperatures will often be over 100 in the other months. If you go on a hot day, start very early. Since the routes go up the west side, starting very early will keep you in the shade until you reach the summit ridge, meaning your time in the hot sun will only be while climbing that ridge and on the descent, which will probably take less than an hour.

Camping, to my knowledge, is allowed without a permit.