La Esfinge (The Sphinx) is a vast granite formation in the Paron Valley, in the Cordillera Blanca in Peru. 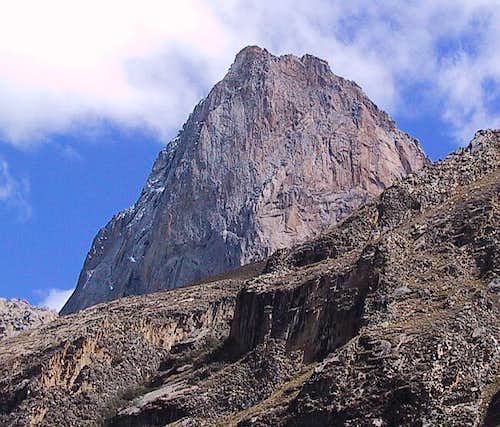 
The real potential of the Sphinx as a wonderful free climbing venue was realized in 1997 by the Spanish-Peruvian team of Julio Fernandez, Guillermo Mejia and David Rodriguez, when they made a two-day free ascent of the Original Route (first climbed with nine bivouacs) at the relatively 'easy' grade of 5.11c. 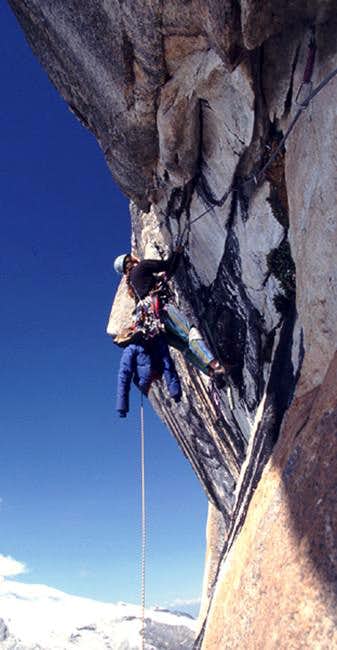 Lucy Regan, on the first ascent of Here Comes the Sun. Photo. sunlover

From Huaraz you can take mini-buses (combis) to the town of Caraz. It is a two and a half-hour ride and it costs costs 5,00 Soles per person (USD. 1,50). Once in Caraz you will need to go for a short walk to Paradero Paron, which is located not too far from Plaza de Armas (Main Square) and then take another combi to the town of Paron which is located almost beginning of Valle de Paron. It costs 5,00 Soles as well (USD. 1,50).

You can also negotiate and additional ride and fare with the driver, around 10,00 Soles (USD. 3,00) extra each and you can even get taken as far as the valleys entrance. That way you could save 1 hour-hike.

Once in Laguna El Paron, leave the permanently manned Guard’s Hut at the lake (porters can usually be arranged there), walk out of the gate and just before crossing a bridge take a small path on the right.

Follow this for 30 minutes, past the entrance to two valleys, until a third valley rises up to the right. Leave the path just before a small stream, at the point where there is a green slab and large pointed block on the ridge above. Ascend a vague track up a large hill until it Levels off after approximately two hours. Stay high near the scree and reach Base Camp, which lies in the direction of La Esfinge, in a further 15 minutes.

From Base Camp it is again best to approach all the routes on the East Face by staying high near the scree. While the sunny East Face is beautifully featured golden granite with great potential for free climbing, the impressive 1,000m high South Face is probably the venue for big aid routes, as it is very cold, remaining in the shade all day.

The South West or West Face is largely snow-covered and probably not that steep. Cloud tends to cover this wall without spilling over the summit ridge to the East Face.

If you know already how many days you will stay, you can arrange to be picked up again with your driver. (Usually 3-4 days).

Expect to pay USD. 10,00 entrance fee to the community (Not to the Parque Nacional Huascaran). A National Park fee is not required for La Esfinge.

You are entitled to stay as long as you want by paying this fee to the community.

Existing lines to date are listed below, (but new other routes are being opened little by little through the years). More detailed route information is available in the Casa de Guias in Huaraz. The length of the route rather than its vertical height is quoted. 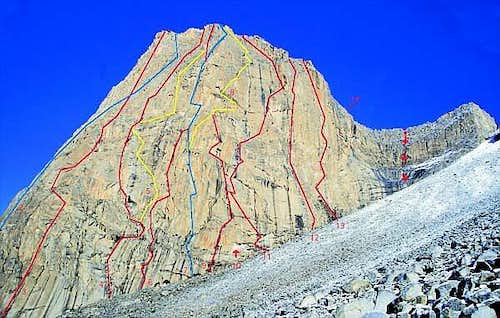 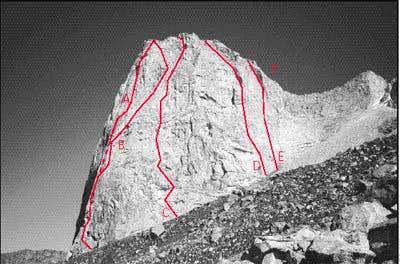 (14) North East Ridge (Huber/Koch/Schmidt, June 1955: easy scrambling: many ascents and forms the standard descent route).From the lowest point on the ridge make three rappels down the east flank to the screes, though originally the crest was approached via the easy west flank).

Special thanks to Evaq (Peru) and Squick(UK) for the valuable information and updates and to UlrichPrinz (original) creator of this page.

Congratulations for your fast climb on the normal route in "La Esfinge"!!
I will climb the same route in july this year, but i´m absolutely not in a rush, don´t worry, i won´t beat your time. I´ll do it in two days with another girlfriend from Ecuador
Can you give me some info about the route, the grading, and any other useful comment (kind of protection, material).

Few climbs of Cruz del Sur this year (2003). one by Aymeric Clouet, Christophe Dumarest and Didier Jourdain. They climbed it in one day and totally on sight, in 10 hours. "A great climb, a great pleasure, not so hard than expected but still a serious climb ..."

Congratulations for your fast climb on the normal route in "La Esfinge"!!
I will climb the same route in july this year, but i´m absolutely not in a rush, don´t worry, i won´t beat your time. I´ll do it in two days with another girlfriend from Ecuador
Can you give me some info about the route, the grading, and any other useful comment (kind of protection, material).

Climbed the Original Route a few weeks ago, and though our team were by no means the fastest (11 hours), there was a "slow" ascent in 6 hours while we were there and as we were leaving a team set off in the hope of doing it in 3.5-4 hours, which I am sure they were capable of doing.