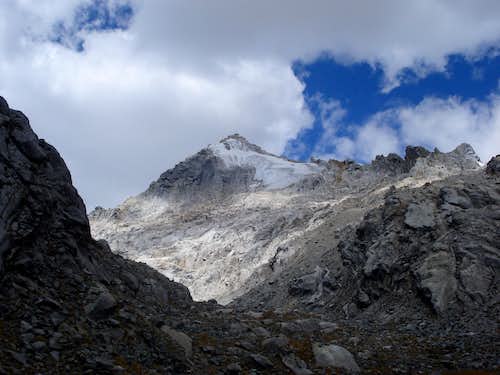 Huamashraju seen from moraine camp. 15 years ago the glacier would cover the mountain down to the bottom of the face.
Huamashraju in Quechua means "Nevado del Miedo" or "Mountain of Fear". The mountain has a pyramidal shape and can be seen from most points of Huaraz, being probably the closest mountain to the city, sitting between Quebrdas Shallap and Rajucolta. This mountain is part of the Huantsan massif. It has an east (5350m) and west summit (5434m). It was first climbed in May 15th 1954 by locals J. Cabana and A. Soriano.
Quoting a local, "there are no easy routes on Huamashraju", meaning most if not all are on the D range and above. It offers several alpine routes: the ones on the left side are mainly alpine rock on crack systems, followed by some alpine ice and mixed climbing. Routes on its right side are the opposite, with straightforward and short glacier crossing, followed by alpine ice and mixed climb to the rocky summit. Most of these routes are not cataloged, and the mountain is seldom climb even though it is so close to Huaraz. The north face has some 400m of granite walls that offer quality granite. It is most frequented by locals, but is a great option as a technical acclimatization climb or if you are in a hurry: if fit, you can climb it from Huaraz to Huaraz in a day. Most climbers leave Huaraz one day and return on the next.
Huamashraju is a mountain that is being hit hard by global warming, having lost an immense amount of its glacier covering in the past 15 years. 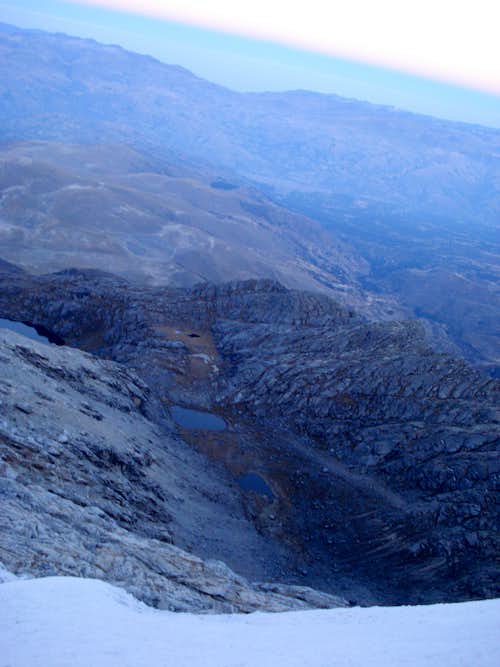 Moraine camp is to the left of the two small lakes in the distance. 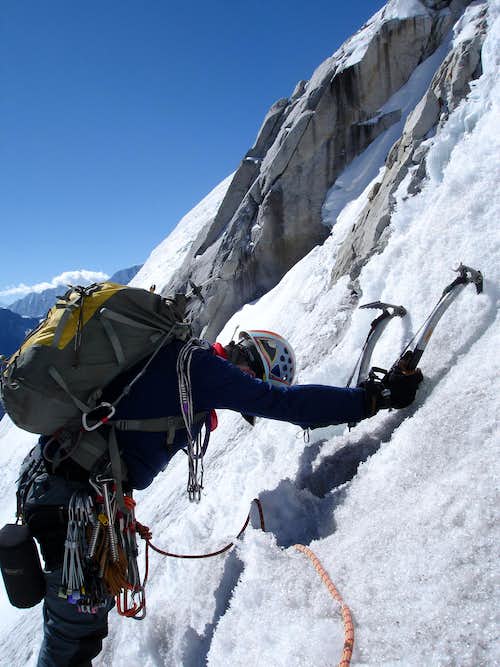 Climber setting out on the 1st ice pitch
Take a taxi in Huaraz towards Quebrada Pariac/Rajucolta, to the Jancu village (1h). From there you can camp on the pampa or move on to the moraine/base camp. 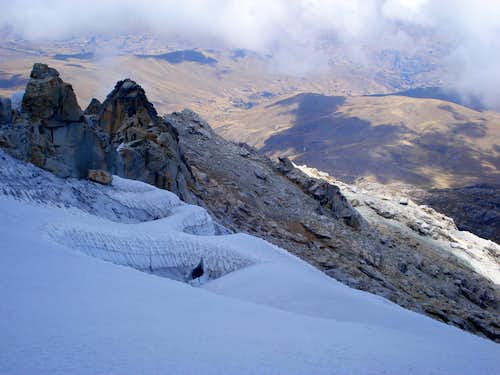 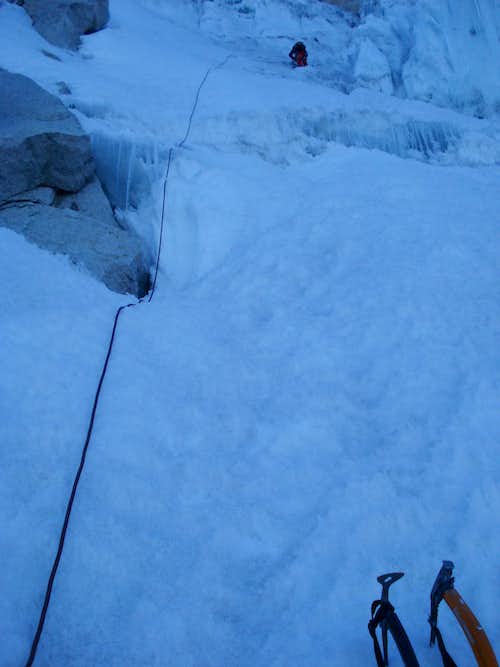 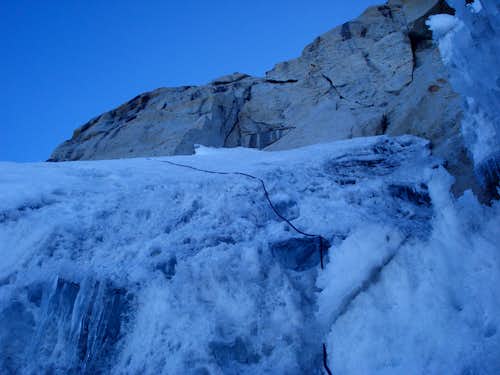 The second pitch, traversing towards the rocky slabs. 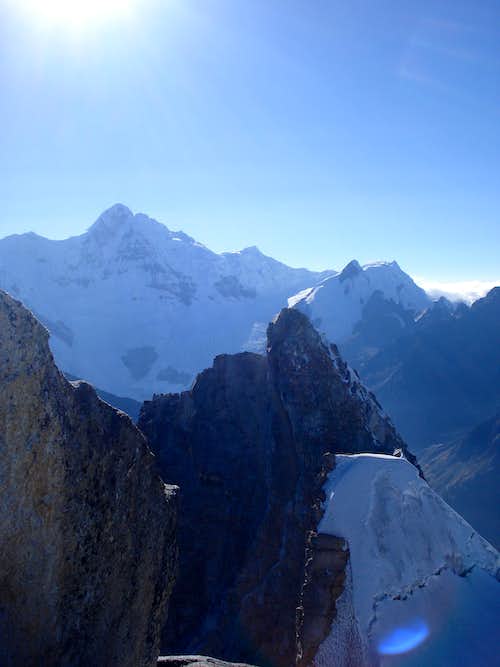 View from the summit: Huantsan. 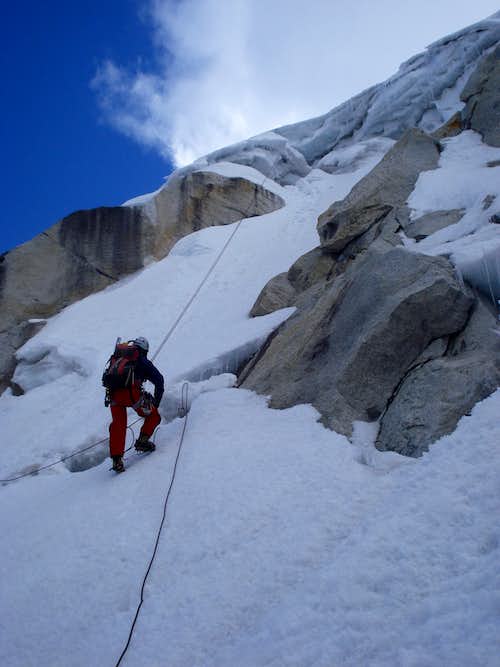 Rapping by a different route, more to the left, saves you two rappels. 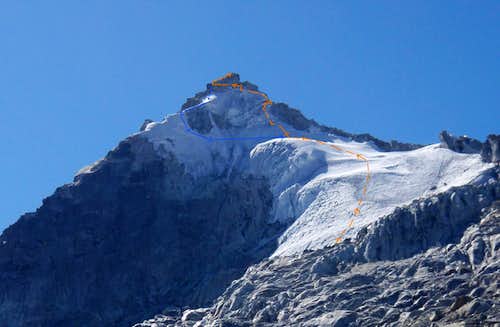 The approximate line ascent and descent on the western flanks of Huamashraju.
From the pampa, walk straight to the big hill ahead. Trail is not very recognizable at most times, but pretty obvious. From there keep ascending and following paths until you reach a rocky area. From there you will walk around to the left and finally see the mountain. Path here is more obvious, so just follow the tracks to the moraine camp (4600m) area. This should take 3-4 hours.
West Face Direct, D 120m 75º
From moraine camp, walk towards the mountain following the marked paths and one in the actual moraine follow the several cairns. It should take 2-2h30 hours to the entrance of the glacier. Route starts at the bottom right of the glacier, around the penitentes area. Move through a low angle area crossing a few crevasses until you reach a steep face. Actual climbing starts here with a first ice pitch that ends near a serac area with icicles that somewhat resemble monster's teeth. Second pitch traverses to the left on ice and snow and then some mixed climb. After protecting on slabs, make a 3rd degree exposed traverse on rock to gain the summit. From there there are many options to downclimb and rapp to the beginning of the route. Bring ice screws, two 60 meter ropes, 2-3 snow pickets and TCUs or friends.
More information on some other know routes can be found here.

There's no entrance fee or guard post, and as of 2013 season, no need to pay any fees for the villagers around it.

Climbing season runs from June until August, but this is a mountain that does not accumulate much snow and does not have a complicated glacier, and is an option until late september for its alpine routes, given there's no precipitation.

Trip report on climbing a new route on the left side of the west face.
And a few videos: