Ranrapalca is one of the most breathtaking mountains of Peru´s Cordillera Blanca. It is easily seen from Huaraz, and overwhelming to everybody climbing nearby Ishinca (5.530m), its North Face is a superb climb.

The name Author: rbartolome Date: Aug 18, The name quechua mean: ranra=stone palca=divided in two It's logic but the aspect is 2 summits from some areas. 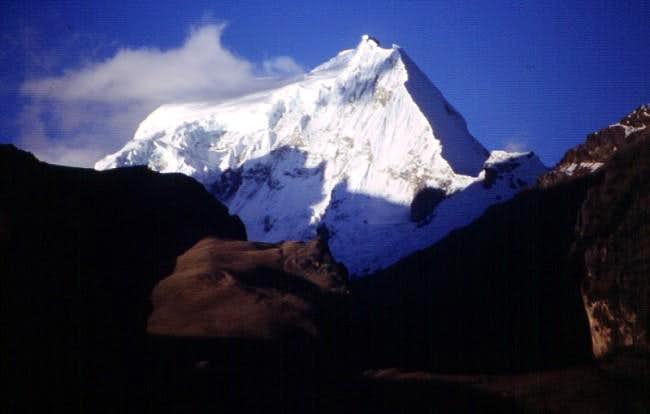 Fly to Lima. Coming from Europe it is suggested that you choose an airline using the "piece system", wich allows you to take two pieces of luggage, 32kg each, with you.

These are some of the hostels in Lima:

If no luck in getting a bed in Lima in any of the places above listed it is always possible to get a room from 10$-30$ somewhere else. Other possiblity is taking the bus directly to Huaraz, they leave from 8 to 10 in the morning or from 8 to 10 at night. From Lima the bus to Huaraz will take aprox. 8h. There are several bus companies and most of them will charge for extraweight.

Once in Huaraz we can find dozens of hostels and getting a bed from 3$-5$ will not be that hard. Here are the most popular ones:

In High Season it is recomended to book in advance.

The cheapest way to get to base camp is getting public transportation to the little village of PALTAY, and from there hike or hitch up to the village of COLLON; the other way is to arrange a taxi ride to Collon from Huaraz. Once in Collon you will be asked to sign the guest book and asked a little money in order to keep the trail to Base Camp in good shape, and also you will be offered the services of "Burros" ($5.00/day) and "Arrieros" ($10.00/day) (donkeys and muleteer) and it is very likely that you will accept it. Go through the village and follow the Arriero to Base Camp (4.330m) in Q. Ishinca. 2-5h depending on your acclimatization.

Quebrada Ishinca is a nice place to put up your BC and a great place to acclimatize climbing lower peaks like Urus (5.420m) and Ishinca (5.530m), and even the beautiful Tocllaraju (6.032m).

If your acclimatization is good I suggest that you camp first day higher up from Q. Ishinca, by the new wooden cabin (4.800) a bit higher than Ishinca Lake, on the way to the Ishinca SW Ridge Route. 1-2h from Base Camp. From there Ranrapalca´s North Face is huge and breathtaking; to the left of it is Ishinca and right in between them, the col to where to go if the NE ridge or the NE slopes are our routes, it will make a good spot to set our Camp 1in that case. If the North Face is our aim, we will set Camp 1 by the glacier right by the North Face but not too close to prevent rock falling.

First time I attempted Ranrapalca was in the summer of 99 via the NE Spur; half way on the route my two basque friends and I had to traverse to the left to catch up with the NE slopes because the snow-ice conditions at 10:00 am where as bad as waist deep corky snow while climbing the sharp´s edge ridge with 600m fall to one side and 150m fall to the other. Not to improve, because the rockfall from the rocky band way above the NE slopes was continuously testing our nerves to the point to make us bail out. The next summer I met up with mexican Emiliano Fernández and climbed the North Face and descended via the NE slopes.

NE Slopes, D- From the Ranrapalca-Ishinca col, that can also be gained from Q. Cojup. Climb the easy slopes to the left of the ridge then two sections through seracs, 60º. And crossing the bergschrund and climbing the ice-wall of a small serac is the crux, specially if we have to find the point to go through it in the middle of the night with the only help of the light of our headlamps. On an easier terrain you could join the NE ridge and climb it to the summit plateu or climbing the slopes straight forward to the summit plateu. Traverse 500m South to the sharped summit.

N Face, Scandinavian Direct 1996, MD/MD+ (V,60º[90º],VI+[V],900m) The route starts to the right of the central couloir of the N.Face. We would have to cross over the rock band on our right, and ascend the snow cone for about 150m. Traverse right under the serac over rock, mixed, ice an snow to head again up in order to climb between the 3rd. and the 4rth. group of rocks in the middle of the face, before arriving to that point we will have to go across the bergschround. From the rock group head up a little left just to leave another rock group right by our left. Keeping on that line we would be getting closer to the N spur to meet with it right at the very top of the face. A short rock section and a gentle snow slope will leave us in the summit plateu. Looking south opposite to us the knife edged summit crowning the summit plateu.

Descent via NE slopes, I suggest to abseil the first part. Some years it is hard to find the way through the bergschround of NE slopes, make sure to be there by daylight. 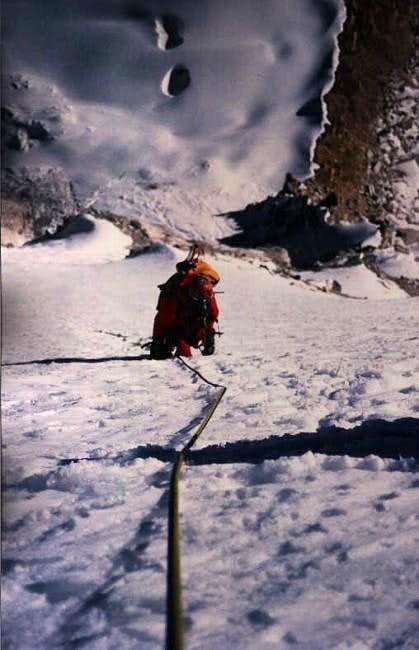 Best to climb the mountain in June-July, some years it can be climbed as late as in August.

There are no proper fees to climb the mountain, although you will be asked for a little money the day you sign up in Collon in order to keep the trail to BC in good shape.