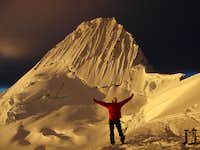 Alpamayo is one of the most beautiful ice faces of the Andes. It is located more remotely than most other peaks in C. Blanca, as the hike to the BC takes 2-3 days (see below). In the first map of Cordillera Blanca from 1932 Alpamayo was not indicated at all! Eventually it was climbed for the first time in 1957 by a German expedition via the N ridge.

Nowadays Alpamayo is well-known and was even elected the most beautiful mountain in the world. It is not the difficulty that inspires the climbers but it's magnificent setting among the everlasting snowcapes of the Cordilliera Blanca, 6000 meters above sea level.

Unfortunately, this makes the mountain very popular and sometime overcrowded. It can transform a beautiful 5 hours climb, when alone, into a nightmare of 15 hours with all the trafic when crowded. It is not unusual to find 10 to 15 partys camping at the col, waiting in line for a chance to scratch the face. 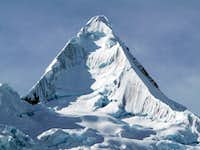 From Huaraz, take a bus or collectivo to Caraz (2h) and then to Cashapampa (another 2h), where you will find the trailhead of the also very popular Santa Cruz trek. Hire burros ($5.00/day) and Arrieros ($10.00/day) at Cashapampa (always available).

You should check, when the last bus bus or collectivo leaves Cashapampa for Caraz (usually not later than 2-3 p.m.). So you can avoid to stay one day in Cashapampa on your way back.

From Cashapampa there are two routes to the two different Alpamayo BCs:

1. The standard route uses the Santa Cruz Valley to reach a BC near Laguna Arhueycocha (4300m). The arrieros (mule drivers) usually do the ascent in 1½ days, but the descent is no problem in 1 day! Except for the last two hours the route is equal to the Santa Cruz - Llanganuco - Trek.

2. The old route via the Alpamayo Valley (Hualcayan, Laguna Cullicocha) takes 2½ to 3 days to the BC near Laguna Jancarurish at 4500m. This route is much less frequented. You must cross a 4800m pass to reach the Alpamayo Valley, which may cause problems to get back in case of altitude sickness. The old route however is the one with the "classic" view of Alpamayo. Some parties combine the two (ascent via Alpamayo Valley, descent via Santa Cruz Valley), but this means that you have to carry all your stuff up to the Alpamayo-Quitaraju-Col.

In the valleys you can camp anywhere you want. There are many possibilities, especially near the lakes. Remember that crowds (unfortunately) mean trash... so please preserve the purety of those mountains by carrying all your waste down with you.

From both BCs you must gain the high camp on the col (5400m)between Alpamayo and Quitaraju in an other long day. It is equal to the Quitaraju ABC. Ascending from Santa Cruz many parties use the "moraine" camp at 5000m, which provides space for several tents (dusty; water nearby during sunshine). 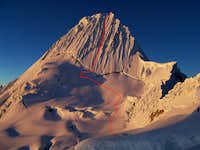 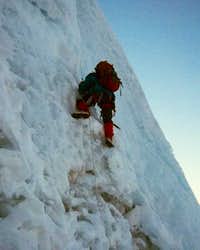 Climbing past a bergschrund on the Ferrari

Alpamayo should not be underestimated. Lessthan half of the climbers coming to the BC make it to the top.

NB: After the July-2003-icefall the conditions in Alapmayo SW-face seem to have changed. See summit log.

North Ridge D The route of the first ascent. Nowadays unusual due to the higher objective risks. The ridge can be gained from Laguna Jancarurish or by traversing from the col.

Descent: While one could rap down the way you came in, the French Direct tends to have established anchors during main season. I recall doing 8 rappels to get down the face. Do two rappels down the Alpamayo col to get past the bergschrund and steep snow, totaling 10 rappels. One can reasonably get back to town the day after a summit bid.

The approach starts out from the town of Cashapampa (3,700m high) up the Santa Cruz circuit trek. 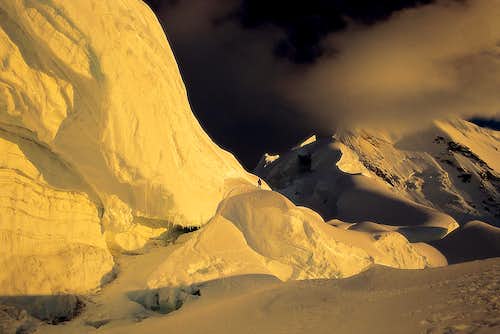 Alpenglow near the Col

Alpamayo is situated in the NE part of the Cordillera Blanca. This means that clouds come up from the Amazonas Basin more frequently. Expect 1-2 days / week with less perfect conditions (fog, snowfall) during the climbing season.

The col camp is typically cold and windy place. Be ready for incliment weather. Generally, the ascent to Alpamayo is considered rather safe. On July 21st, 2003 however, an ice-avalanche killed 8 climbers in Alpamayo SW-face. Obviously a huge cornice overhanging the summit ridge had collapsed. 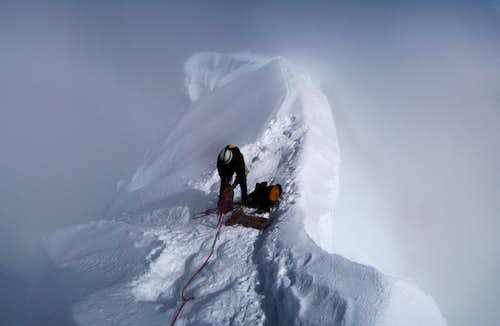 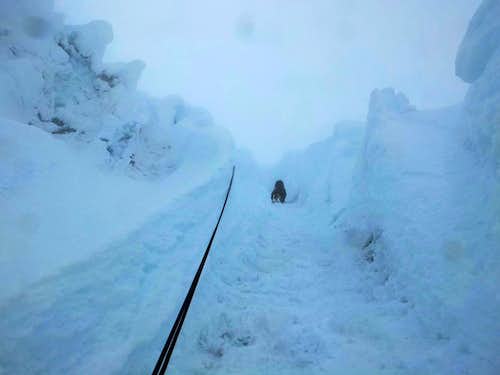 May through September are optimal times to climb Alpamayo. July is in my opinion the best month in terms of snow coverage and weather stability. Despite July being their winter, the fact that they are so close to the equator makes their winters produce less moisture.

In the year 1979 a Yougoslav team climbed one root not metioned in Summit Post:

The French Direct route was actualy passed on the 5th of july 1979 in a descant of a Yougoslav team who riched the top of Alpamayo by a new Kranj route (4 climbers) and another group of 7 climbers (6 Yougoslav, 1 Peruan) who climbed up the normal N ridge.

The descant ended with a spectacular jump over the bergschrund. See the attached photo and do not repeat, despite all the nice memories of the team.