Climbing mountains on the Rocky Mountain Front is a bit like listening to an album's worth of bluesman Elmore James' slide guitar. At first blush everything seems the same, but the little differences make each one uniquely interesting. Typical of peaks on the Front, Fairview Mountain is an outcrop of the Lewis Overthrust, featuring steep eastern faces and gentler western slopes composed of crumbly layers of ancient limestone sea beds. What's interesting about Fairview Mountain is that the break in its ridgeline and lower northeastern "peak" makes it less a long, narrow reef like Sawtooth Ridge, Steamboat Mountain or Castle Reef, and a bit more like a hike up its taller sibling Mount Wright. Summit views are great, with inspiring vistas into the Scapegoat and Bob Marshall wilderness areas to the west and a spectacular look down to Haystack Butte and the Great Plains to the east.

The climb itself is mostly a pleasant hike, ascending a bit less than 3,000 vertical feet in about 3.5 miles with nothing more than stout legs and lungs required to reach the top.

From the town of Augusta drive west along the Benchmark road for about 15 miles to the fork at the Willow-Beaver Creek road. Take the right-hand road at the fork and drive a bit more than a mile to Camp Scoutana, then turn left onto the road there. Follow it 2 miles more to a closed gate. You can park here or continue a short way to a second gate which marks the actual trailhead. 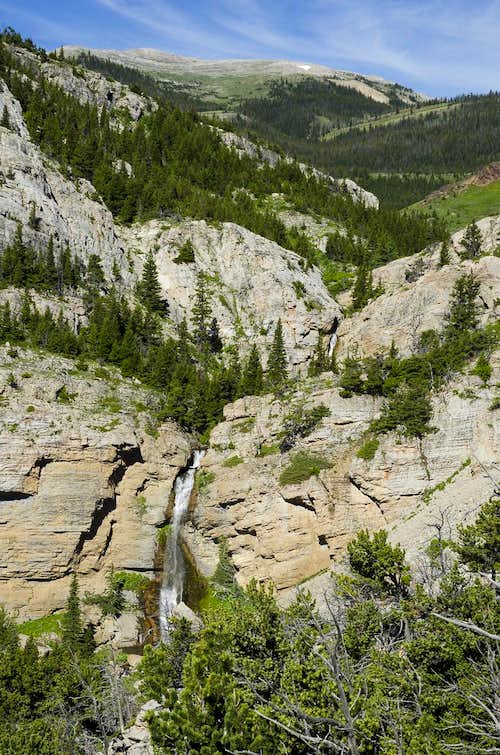 Two of several in a string of beautiful waterfalls descending Willow Creek Canyon on the approach to Fairview Mountain. The canyon is a worthy destination in its own right.
A great added bonus to climbing Fairview Mountain is the approach, which follows Trail 204 up through Willow Creek Canyon and its gorgeous chain of waterfalls. The trail starts with a creek crossing near a few homesteads, then through open meadows and stands of trees before ascending the north wall of the canyon. As you climb along this steep sidehill, you're actually hiking on the southern end of the Fairview Mountain ridge. The trail will gain elevation fairly quickly as you gaze down on a series of elegant cascades, several of which can be carefully climbed down to on slopes of rotten scree if you'd like a closer look on the return journey.

Beyond the last major waterfall the canyon will begin to open up into a grassy plateau peppered with wildflowers, and Fairview Mountain itself will be the ascending ridgeline to your right, just north of you. A few approach options are available from here. The first side gulch that comes into view on your right, with steep rocky flanks, will offer access northward into an ascending drainage that leads upward to the peak; this gulch's eastern ridgeline is actually Fairview Mountain's main ridgeline. You can hike up this gulch toward the summit, or ascend to the top of its eastern ridgeline and follow it north all the way to the top. 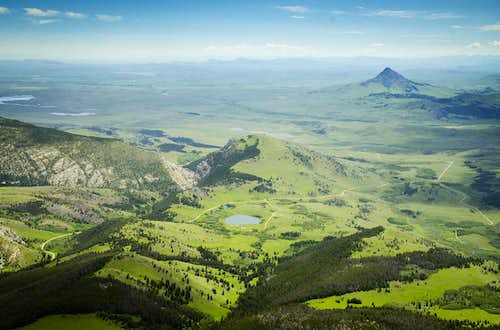 Conical Haystack Butte rises dramatically above the interface between the Great Plains and the Rocky Mountain Front in this view from the summit of Fairview Mountain. The pond and buildings of the Hidden Valley ranch are visible at lower center with the rocky notch at the southern end of Lime Ridge just beyond. At upper left, just above Nilan Reservoir, the trio of Shaw, Square, and Crown buttes can be seen on the horizon in the direction of Great Falls.
However, there's another option close at hand that's a lot greener and a lot less hot and dry than many Rocky Mountain Front scrambles. Instead of taking the first gulch on the right, continue walking west on Trail 204 a bit farther into the plateau. Soon you'll come to a little creek crossing the trail, and you'll spy a second, broader gulch on your right that heads north, paralleling Fairview's main north-south ridgeline. Leave the main trail and walk north into this draw, following intermittent trails up it through grassy slopes and stands of trees. You'll gradually gain elevation as you work toward an obvious saddle ahead which connects to Fairview's west face.

Continue all the way up to the saddle, about 1.3 miles from Trail 204, observing the game trails criss-crossing the bare patches to your left as you near the head of the gulch. Bighorn sheep frequent the area, so keep a sharp eye for them as you move upward. Once at the saddle the view northward will open up dramatically, and you'll be able to inspect the strata that Fairview forms a portion of as it continues north, eventually to Allan Mountain. Stop for a break to take in the view, then turn east and ascend the sparsely wooded western slopes of Fairview Mountain, gradually gaining its summit ridge, and follow the obvious route south from there to the summit.


You can retrace your steps on the descent, or opt for a more direct line back towards the Fairview Plateau, dropping down toward what becomes the first gulch you passed on the way in. As with any downward route which differs from your ascent, be mindful for unseen dropoffs or dead ends, although few such obstacles exist here and the general route back toward the plateau above Willow Creek Canyon should be fairly obvious. Another scenic option would be to follow the south ridge of Fairview Mountain itself all the way back to the head of Willow Creek Canyon, which will be more pleasant to descend than to climb. 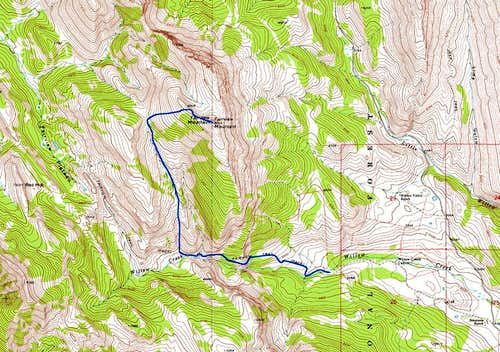 One of several route options for climbing Fairview Mountain.

None to speak of, but the homesteads adjacent to the trailhead lie on private property, so be mindful and stay south of the fenceline as you approach Willow Creek Canyon. 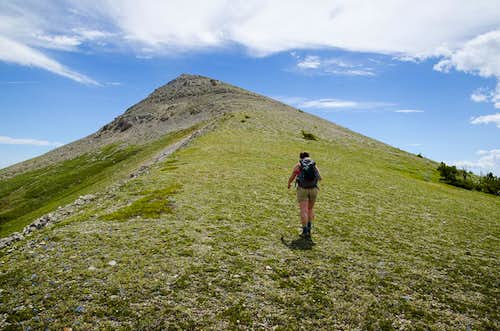 Moving south on the final stretch of the climb to the summit of Fairview Mountain on Montana's Rocky Mountain Front.
Accessible any time of year with the right vehicle and gear, but obviously great in June and July when the waterfalls are gushing in the canyon and wildflowers are blooming in Fairview Plateau.

Camping is available to the north at Home Gulch or farther along to the southwest on the Benchmark road.