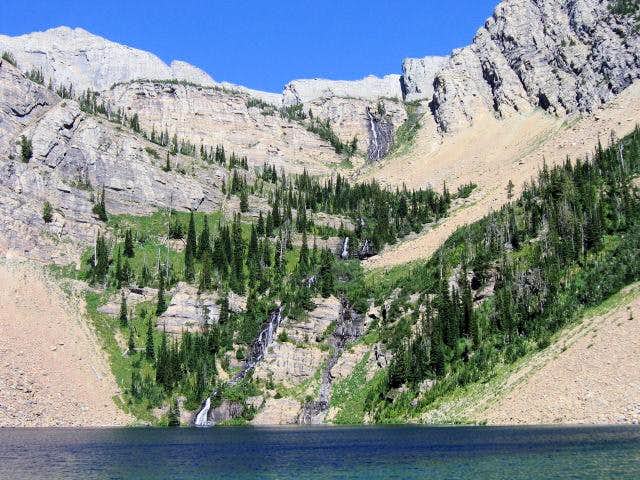 No discussion, or climb, involving Western Montana's Swan Range goes far without mention—or sighting—of "The Bob," the Mission Range to the west, or the beautiful Seeley-Swan Valley in between. The Swans are in both the Flathead and Lolo National Forests, and run approximately a hundred miles north and south—the northern point being immediately south of Columbia Falls, MT.—with much of the range's crest forming the western boundary to the Bob Marshall Wilderness. This brief quote from Pat Caffrey's now out-of-print Climbers Guide to Montana is noteworthy: Sudden and striking, an immediate 6000' rise on the west side, with long ridgetops of grass and timber trailing off eastward. South of Holland Creek the crest is a continuous wall eight miles long. Elsewhere it is set back, less obvious, and broken occasionally by high passes. 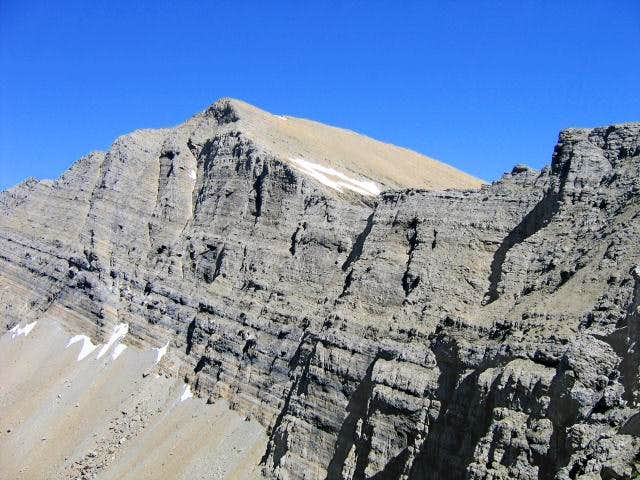 At 9356' Holland Peak is this rugged range's high point, with the ascent involving approximately a five mile jaunt, 5000' of which is elevation gain over less than four miles—a stunningly beautiful approach involving a two-tiered hanging glacial valley with a lake on each level, a creek which, from the time it pours out of solid rock just below Upper Rumble Creek Lake to when it exits the lower lake falls well over 1000'; and, as if that wasn't enough, upon reaching the upper lake you find yourself confronted with 1500' of sheer wall running from lake to summit. All this while passing through a land infested with wildlife, plus, if tiring of what's before you, it's a simple matter to turn and gaze back over the valley to the eastern wall of the Mission Mountains. Then—finally—from the summit, running east as far as the eye can see is the vast Bob Marshall Wilderness, and on a clear day the northern horizon includes the southern reaches of Glacier National Park. Holland Peak is a hard day's work, but is in all respects a magnificent outing!

Holland Peak's View of the Neighborhood

West to the Missions...

On Montana State Hwy 83, approximately 28 miles north of Seeley Lake, or 2 miles south of Condon—mile marker 39—turn east on the Rumble Creek Rd. Follow road four miles to parking area, which is a quarter mile or a bit more past the lookout. The parking area is large enough for several vehicles. 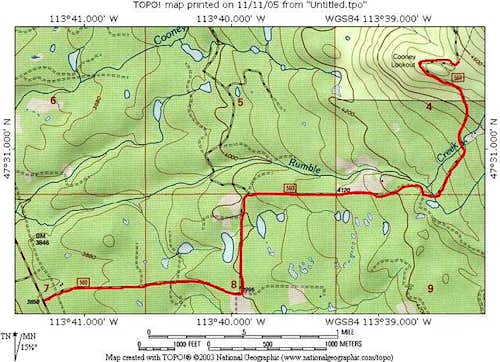 From the parking area take trail #192, which is clearly signed as such. After about a mile of mostly level hiking (it's a good trail), you come to an unmarked junction, with trail 192 continuing ahead, and the route to Holland Peak veering off at a 90 degree angle to the left. There are no other junctions prior to this, and even though the trail up the mountain isn't on any map (it is apparently an old game trail, but the mountain has become popular enough that this route probably should be put on future maps, as the trail goes the entire way to the summit), the turn-off is easily seen. So take the left at this point...and immediately begin climbing. And climbing. Steeply, unrelievedly, climbing (be forewarned: NO ONE enjoys going down this at day's end!). After gaining about 2000' elevation the trail moderates, and the way becomes less strenuous until reaching Lower Rumble Creek Lake...

...at which point traverse the right (south) shore (you will have crossed the creek shortly before reaching the lake), then stay right of the creek while working—steeply again, with the added difficulty of loose rock and scree—to Upper Rumble Creek Lake, where you may wish to stop for a break (both lakes are wonderful lounging-around points, the upper—and larger—lake the more so) while coming to terms with the sheer 1500' cliff immediately before you (which, not to worry, is most assuredly NOT the way you'll take, although it is my understanding the face has been climbed).

From this point the trail winds as it takes off from the lake's south shore, leading steeply to the ridge which is Holland Peak proper. The trail winds around the low south summit, then brings you to the saddle between it and the main, and final, summit approach. This col presents you with cliffs, and slabs, and exposure (see pictures), and snow fields, so be careful! Early in the summer crampons and an ice axe would be necessary, but by the time we did it (July 30th), the snow fields posed no problem other than that of using caution. Once past the saddle (which is actually quite enjoyable—in good weather, so pay attention to that, in addition to all the other joy-of-climbing emotions filling your mind at the moment), it is a relatively simple matter—and the way is obvious—of working your way to the summit, where there is a register to sign if you wish, and you can enjoy the world in general.

Best months are normally July through September. These mountains get a great deal of snow, and what remains in June would almost certainly be substantial, with the terrain being such that crampons and ice axe would be a requirement, and any bad weather making the upper reaches of this peak quite dangerous. For all practical purposes Holland Peak would be inaccessable in winter.

There are numerous Forest Service campgrounds throughout the Seeley-Swan Valley, and motels in all the small communities. In addition the area is within reasonable driving distance of Missoula, Columbia Falls, and Kalispell. Except maybe on holiday weekends, finding facilities should be no problem.

Probably anyone prone to climbing in this part of the country already knows this, but the Northern Rockies are full of wildlife, and considerations should be the same as for Glacier National Park. Always be aware, and don't do anything stupid, like—for example—leave food where bears can get at it, think that a mountain lion is even remotely related to your pet cat, or run up to a moose (moose are quite unpredictable, irritable, and very dangerous). And never, ever, EVER forget you’re in grizzly country; they insist on being left alone—disagreement on that point is not an argument you’ll win! Bear spray and noise should be part of every foray you make into the back country. Black bears will be found in the forests, grizzlies commonly venture onto the above-timberline tundra, sometimes, when in pursuit of such delicacies as ladybugs or cutworm moth larva, even to the summits!

In addition to the wildlife already mentioned, the Swans are home to elk, Canadian lynx, bobcat, deer, wolves, the occasional grumpy wolverine (all wolverines are grumpy—it's a rule with them), badgers, martens, innumerable rodents large and small, both bald and golden eagles, osprey, and loons (over 50 different species of birds!), and flowers. And to top it all off, in the spring of 2005, a pair of trumpeter swans took up residence on the Swan's western flank, nesting on one of the Seeley-Swan Valley's many lakes. The female was killed when she flew into power lines, but the male raised the cygnets, and the fervent hope is that the family will return each summer—trumpeter swans are wonderful!

I posted a topo map with the route I took last fall. I believe the other topo map is a little misleading. You leave the main trail much sooner (not far after crossing Rumble Creek) than is indicated on the other map. If you try to find a trail close to the South Fork of Rumble Creek, you'll most likely end up on a game trail that will peter out. Yes, I've done it. Also, the route on the other map indicates that you'll drop way down into the basin south of the upper lake after climbing that ridge. Thankfully, the trail doesn't go into that basin, it follows the ridge up around the southern summit, Point 8852, so you really won't be losing all of the elevation.

MTcutts is right. The trail takes off just past Rumble Creek crossing. We climbed Holland Peak on September 19, 2009 and I tracked our route on my Garmin GPS. I will post the JPEG of route if possible on SummitPost to replace the incorrect map. Great day with awesome views. Saw mountain goats above Upper Rumble Lake. Climbed Sunday Mountain the following day in snow squalls.

Linda, MTcutts.... Thanks for the info! At first I didn't see to what you were referring, and so didn't make the correction. NOW I see it, and have put in a new topo/route map. I'm going to be completely redoing the Holland Peak page this winter, and am glad to have the corrected info! Vernon

vernon I think it would be helpful to move the "Getting There" section that talks about getting to the trailhead in front of the "Route" section. I re-read this again after my earlier vote and had to hunt for the directions to the trailhead. Just an idea but I think it decreases confusion and makes the page easier to read.

Re: regarding page order

Thanks, Blake, for the suggestion—and consider it done.... Page is still scheduled for a relatively major overhaul. (Also, I'm sending you a PM....)

Re: regarding page order

that makes the reading a lot easier.

"..... After about a mile of mostly level hiking (it's a good trail), you come to an unmarked junction, with trail 192 continuing ahead, and the route to Holland Peak veering off at a 90 degree angle to the left. There are no other junctions prior to this..." This is inaccurate and miss leading. There is a Game trail, a well beaten game trail, before you get to the Creek. I went up that trail and it fades to nothing.