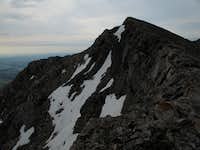 At their western end, the High Plains of North-Central Montana meet an abrupt and dramatic end: the Rocky Mountain Front, which rises with almost no intervening foothills and guards the interior of a vast sea of mountain wilderness filled with little-known ranges, wild rivers, and the wildlife that once roamed most of the West and here finds one of its last and best places of refuge. This is Bob Marshall Country. Nearby Ear Mountain is especially notable; the plains at its base are the last place in the United States where grizzlies still descend from the mountains to patrol the High Plains. This is a special place; treat it well. It is truly about the mountains and the wilderness here.

Choteau Mountain is not actually within the Bob Marshall Wilderness, but it is just a few air miles away from it, overlooks it, and shares its geological and biological characteristics. One of the peaks that makes up the first wall of the Front, the wall that meets the plains, it occupies a rather special position; from its summit, one can look north and south up and down the crest of what in this section is called the Sawtooth Range (the jagged appearance of many of the peaks explains the name), gaze east across the vastness of the High Plains, and then make a 180-degree turn and see what could not be more different: an ocean of mountains seeming to have no end.

Choteau Mountain is a massive mountain, but it is a gentle giant, although it does possess some sheer cliffs and otherwise rugged aspects, and it is accessible to the average climber. It is not, however, a trail hike to the top. 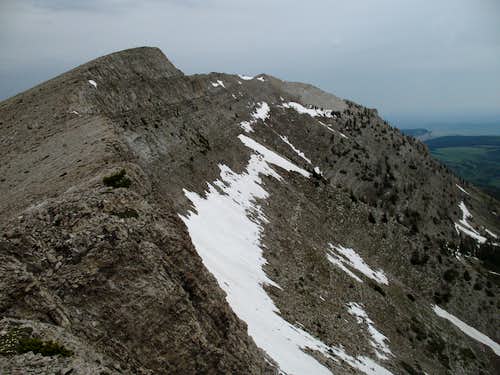 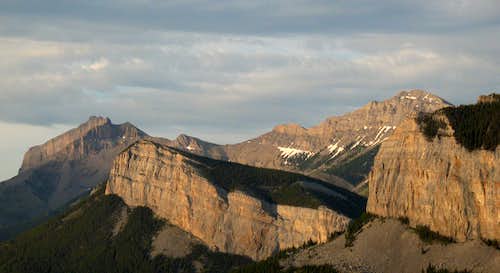 There are two approaches for climbing Choteau Mountain, and the approaches each offer a variety of different routes to the actual summit. Although there appear to be Class 2 possibilities, one should go prepared for at least Class 3; and it is easy to keep the route no more difficult than that.

I strongly recommend having and using the USGS Cave Mountain quad out here.

From Clary Coulee Trail: This approach, from the east, is the best one because it follows a good trail to a high position; also, the potential routes from it offer some fun scrambling and/or snow work and only short, mild bushwhacking. Follow the scenic trail (make sure to look back occasionally at the ever-improving views of the high peaks to the south) for 4 miles until it reaches a saddle at 7200’. If you’re just here for the hike or bad weather is approaching and you doubt you can reach and descend the summit in time, hike east for 0.3 mi to the top of the promontory there, where you will have outstanding views east across the plains, west to Choteau Mountain, and north and south along the crest of the Sawtooth Range. 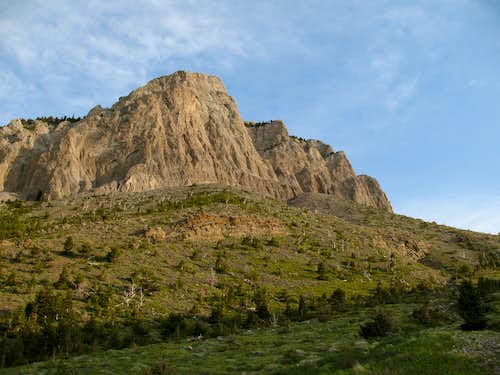 To reach the summit, which is only half a mile away and 1200’ up, study the mountain and choose a line. Note that any line from the saddle is going to involve some mild bushwhacking (as this is near treeline, the forest is not very dense here). The easiest routes seem to be those that require an ascending traverse to the south; using one of them will require a ridge walk back north, for the summit is almost directly east of the saddle. It is more direct, though, to aim straight for the tower that appears unclimbable without technical gear and actually discover a way up or around it (to its south, though). This is the way I took, and I found the going easier than I expected. Most of it was Class 2 on tolerable talus and more solid rock, but I did encounter some Class 3 pitches. Higher up, you will discover that the “tower” is really just a short ridge or arete extending from the main summit and terminating in cliffs at its eastern end. 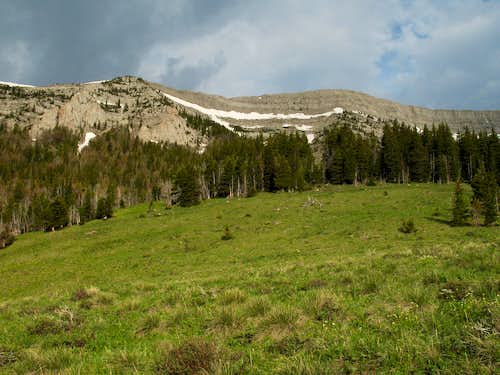 The summit is almost at the northern end of the mountain’s mostly flat summit ridge. Enjoy the views and then make a descent plan. You can, of course, go back the way you came, but if you came up by one of the more direct routes as I did, it may seem almost sinful for you not to walk the beautiful ridgeline south. From the summit, the ridgeline looks like a knife-edge, but it is not. However, you still need to watch your footing. The Rocky Mountain Front is typified by ancient uplifted reefs that tend to be almost sheer on one side and almost gentle on the other, and Choteau Mountain is no exception. Should you slip and fall to the east from the ridge, you will be looking at a tumble or outright fall of up to a few hundred feet, the fastest way down but not the best.

A bonus of the ridge walk is also the discovery of a large hole about midway along the main summit ridge. It looks like the opening of a mine shaft, but given the limestone makeup of these mountains and the lack of mining ruins in the area, I suspect this may be the entrance to a cave. Do not enter the cave without rope and other technical equipment; a glimpse into the opening gives way to darkness quickly, and climbing in or out without a rope does not look very easy or sensible.

As you walk along the ridge, study possible routes down, there are several options, though they actually become fewer and more difficult once the ridge begins notably losing elevation. When the ridge began to reach a forested section, I scrambled down a moderately steep drainage that avoided any bushwhacking and returned me to the trail at a saddle between the mountain and Point 7086.

In all, the outing involved about 9 miles RT and 3300’ of elevation gain, though the actual number was probably 100-200 feet more due to dips in the trail as it crossed some drainages. 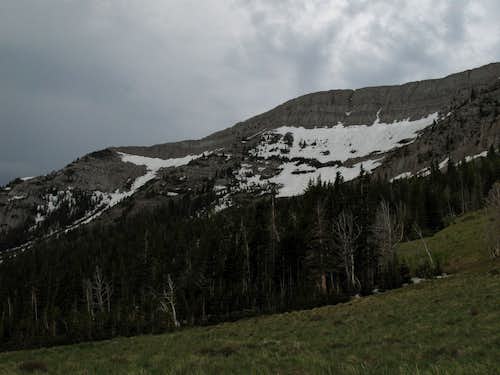 From Jones Creek Trail: This approach, from the west, is more adventurous. I have not climb the peak from this side, but I did study possible routes while approaching a different peak nearby. It seems that this side, where the mountain’s slopes are broad and comparatively gentle, offers numerous Class 2 possibilities. There are two drawbacks: one is that you will face moderate to dense tree cover (that means bushwhacking), and the other is that you will leave the trail at less than 5600’, meaning almost 3000’ of bushwhacking and talus hiking.

After about 1.5 miles, the Jones Creek Trail, which gains only about 600’ during those two miles, drops into the wide gravel bars in the valley of Jones Creek, which makes a net gain of about 500'. During the hike and from the creek bottom, which is mostly open and provides great views, especially north to the headwalls of the drainage, study the possibilities and pick a route.

About five miles north of Choteau, look for a road indicating fishing and skiing access (for the Teton Pass Winter Sports Area) and heading west. Take this road. 17 miles along, a road will branch left, cross the river, and become gravel. DO NOT take this road. Instead, stay straight, and the road will soon turn to gravel (well-maintained and probably passable even to a Corvette), enter the mountains, and take you through some gorgeous mountain scenery that almost no one outside Montana knows is there. The Clary Coulee Trail is 4.5 miles from the fork, and the Jones Creek Trail is 8 miles from it. Both trailheads are signed. 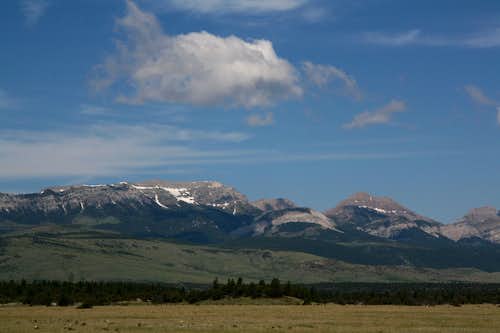 There is a campground at Cave Mountain Recreation Area, between the Clary Coulee and Jones Creek trailheads; the fee is $6 per night. There are water pumps there, but I have never stayed there and do not know if they work. You can also backpack in, sleep in your car at the trailhead, or use a dispersed camping site. 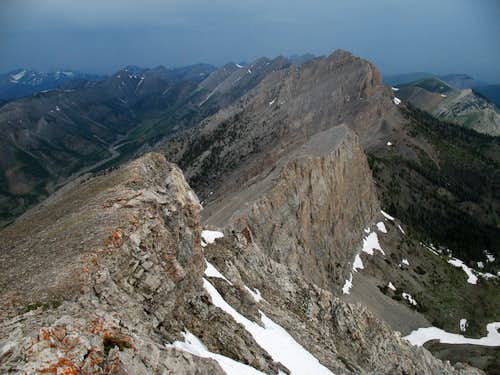 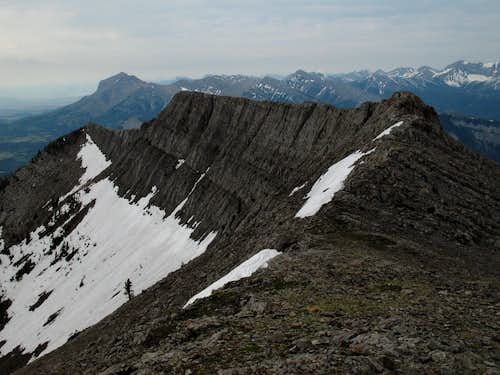 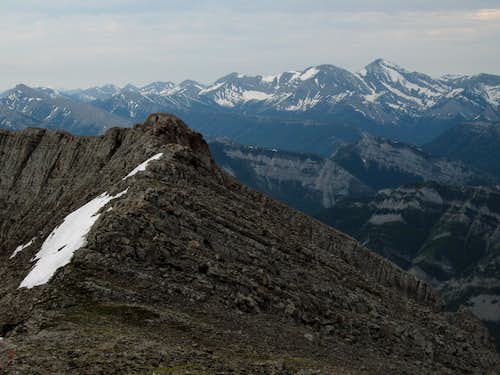 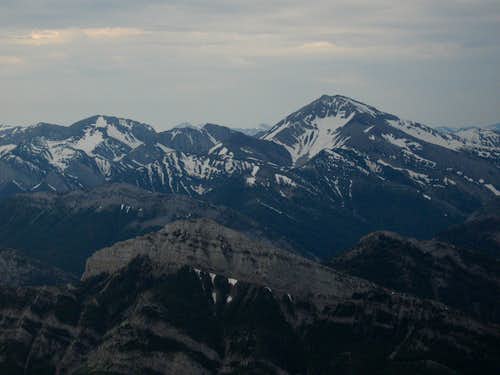 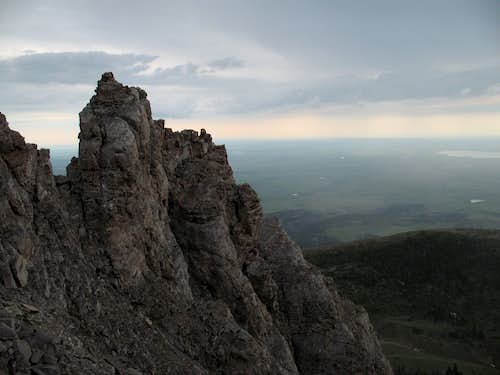