Mountains are beautiful. Few would dispute that.
Some mountains are more beautiful than others are. Few would dispute that, either.
And there are mountains that must be seen. The why can vary, but the majesty does not.
Deep within what is arguably the Lower 48's wildest place and what is unarguably one of its largest roadless areas is a 12-mile-long limestone escarpment, over 1000' high along much of its expanse, called the Chinese Wall. For those 12 miles, it defines the Continental Divide, the mountainous "spine" that separates America's Pacific and Atlantic watersheds but which really runs all the way from the Arctic to the last lonely tip of South America. (Two points to note: some sources put the length of the Wall at up to 40 miles, but the Wall "proper" seems to be the unbroken line of cliffs from Larch Hill Pass to Haystack Mountain; there is a stretch that actually is not on the CD because in that area the CD swings west to go over the crest of Sphinx Peak.)
Because Haystack Mountain and the Chinese Wall are surrounded by mountains in all directions, views from atop them feature the true ocean of mountains that many mountaineers covet and which relatively few peaks can deliver.
Although the Chinese Wall is truly remote, being nearly 20 trail miles from the closest trailhead, its uniqueness and grandeur make it a popular destination for backpackers. In fact, many place the journey to the Wall and along its base among the classic backpacking routes of the Rockies and all of North America. So don't expect solitude out there. Relatively few, however, stand atop the Wall, and climbing Haystack Mountain might be the easiest way to do it. Up there, you are far more likely to find solitude. 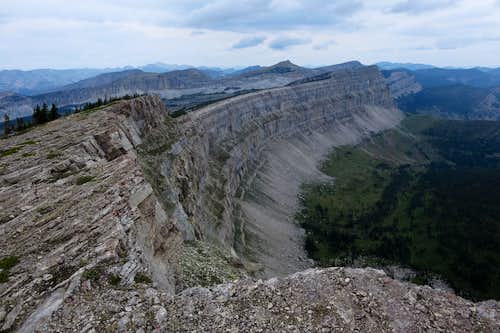 North along the Chinese Wall from Haystack's summit
Anchoring the southern end of the Chinese Wall is Haystack Mountain, one of four named peaks along or just off the crest of the Wall [from north to south, they are Salt Mountain, Cliff Mountain (the highest peak along the Wall), Sphinx Peak (not actually on the crest of the Wall), and Cliff Mountain]. Haystack is the second-highest named peak along the Wall but really the third-highest peak on it, as there is a higher unnamed peak between it and Cliff Mountain.
Despite the fact that Haystack is by common definition one end of the Wall, the cliffs that characterize the Wall actually continue south of Haystack almost all the way to White River Pass. 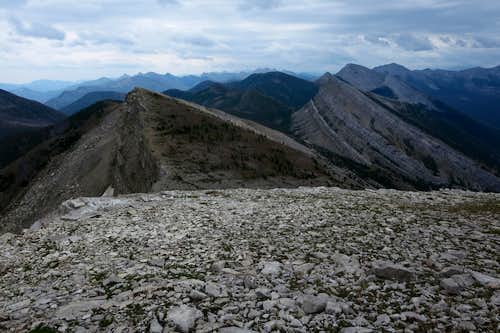 "The Bob" is a vast place, with numerous access points and virtually countless ways of putting an itinerary together, so I will simply describe the way I went to Haystack, which also happens to be the shortest way.
From the small town of Lincoln, find the signed road heading west toward the mountains and Benchmark, which is the most heavily used trailhead for the Bob Marshall Wilderness. It takes about 45 minutes to an hour to reach the TH via a good but dusty gravel road that approaches and then winds through beautiful scenery. Park as close to the north end of the lot as you can, for that is where the trail begins.

Via Benchmark and White River Pass

Take the South Fork Sun River Trail. Almost right away, there is a large bridge to cross. After almost 5 miles of mostly gentle hiking that is more downhill than up, cross another large bridge, this one over the West Fork Sun River. Shortly after the bridge, which is a great place to rest, have lunch, and replenish water supplies, reach a trail junction. Turn left to leave the South Fork Sun River Trail and follow the West Fork Sun River Trail.
Now the trail trends uphill, with some dips, but still retains an easy grade most of the time.
9.6 miles from the TH is the signed junction with the Prairie Reef Lookout Trail. 10.5 miles from the TH, the trail enters Indian Point Meadows. At the 10.9-mile mark are an easy stream crossing and a spur trail to a ranger cabin.
When you reach Indian Point Meadows, 10.5 miles from the TH, you have gained about 650' from the TH but have lost about 550' as well.
About 12 miles from the trailhead, reach a junction with the trail to White River Pass. Turn left, drop to the Sun River, ford it, and then continue.
The trail to White River Pass is 4.5 miles and gains almost 2200'. Although it is almost all uphill, it has a pretty moderate grade throughout. After the first mile or so, the scenery is great.
At White River Pass, you are approximately 16.5 miles from the car, and you have gained a total of about 3400' not in altitude but in vertical travel (due to the ups and downs on the hike to Indian Point Meadows). 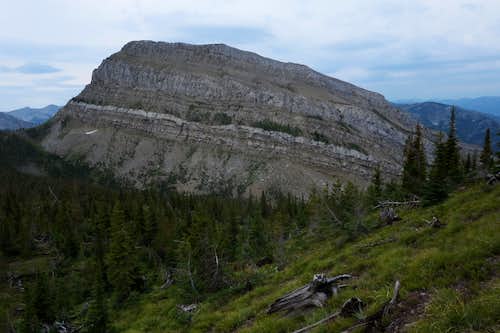 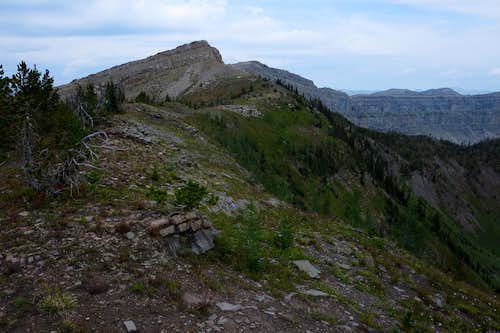 False and True Summits of Haystack Mountain
From White River Pass, at 7600', Haystack Mountain's summit is 1.5-2 miles away. Elevation gain is about 800' in all. While I am pretty sure one could make a Class 2 route of it, that would entail significant elevation loss and additional distance accrued; the direct route involves two "cruxes" that go at Class 3/4. Those cruxes involve the two peaks of the false summit between Point 8133 and Haystack Mountain.
Once past the cruxes, drop down to a saddle and then head up a very steep but short ridge to the summit. 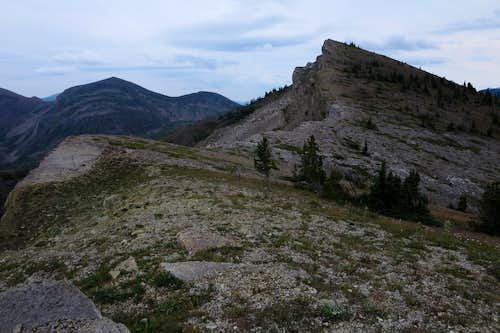 False Summit from the saddle
From Benchmark to the summit, total one-way distance is about 18 miles with a total elevation gain of approximately 4300'.

Maintained mostly by outfitters and guides, a trail does go to the summit. In 4.2 miles, it gains 3629'. To reach the trail via the approach I have described, continue down from White River Pass for 3.6 miles and 2700' (of loss, remember) to what is said to be a well-marked intersection.
If you have approached White River Pass from the West Fork Sun River, using this trail obviously makes no sense unless you are already going over White River Pass as part of a thru trip. There are, of course, ways of reaching this trail from other directions, but they are very long, and I will leave it up to interested parties to figure out their own itineraries. 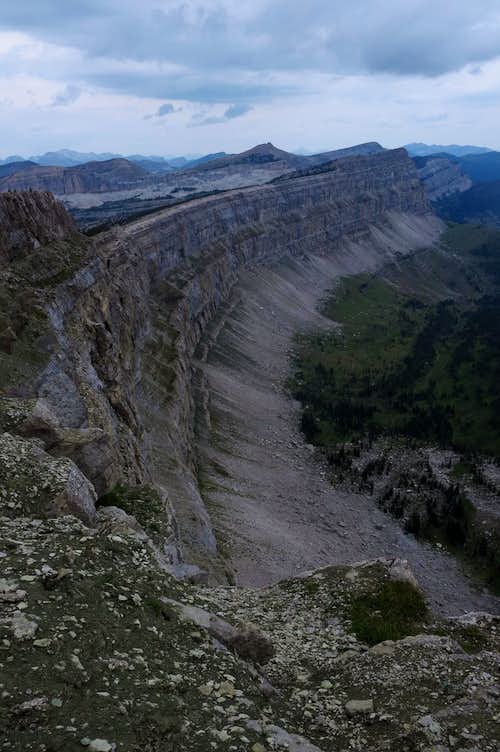 At Benchmark, parties are supposed to register before departing. This is free.
Read the regulations posted at the trailhead.
Packing a gas stove is a good idea. This area gets hot and dry in the summer, and fire bans are not uncommon.
This is prime grizzly country. Know how to store food and how to use pepper spray and just how to behave in general.

There are numerous camping opportunities along the trail. Making a base camp near Indian Point Meadows, 10.5-11.5 miles from the trailhead, is a good idea. From that point, day trips to Prairie Reef, the Chinese Wall, Pearl Basin, and White River Pass are possible.