Update: When I was out here in August 2009, the road was closed past the Teton Pass Ski Area on weekdays, and there was no access to the trailhead. If you are planning a visit here, check with the Choteau Office of Lewis and Clark National Forest first, as it is a long drive to the trailhead. Phone #--(406) 466-5341.

Mount Wright is in the Sawtooth Range of Montana's awesome Rocky Mountain Front and sits on the boundary of the Bob Marshall Wilderness. The ruggedness and remoteness of the area mean that the mountaintops don't give up their secrets easily, but Mount Wright is an exception in that there is a maintained trail, albeit at times a very steep one, all the way to the summit. Wright is neither the highest peak in the range nor the prettiest (it's quite uninspiring from the road, in fact), but it holds one of the best mountaintop views in Montana and, in my opinion, the entire United States. That's a bold claim, but this mountain allows its guests to behold a sea of peaks stretching all the way to southern Glacier National Park, and there just aren't that many other mountain ranges in the Lower 48 that offer those kinds of unspoiled views in all directions. Most (not all) are in Montana and Wyoming.

Back when I first made the page for Mount Wright, someone asked me if there would be more pictures of the summit views. Because I had first climbed the peak before I knew of SP and therefore had no page in mind at the time, the answer was basically "no."

But I went back up in 2009 and took several summit shots to add to the page even though skies were a little hazy. Since there is not enough room on the page to display all those images plus the older ones, I attached them all to this page's gallery. All the pictures are from the summit or the summit ridge.  Another nice thing about this, I hope, is that by not displaying the summit views here on the main page, I am leaving those using the page the opportunity to "discover" the views for themselves.

About four miles north of the Rocky Mountain Ranger Station in Choteau, look for a road indicating fishing and skiing access and heading west. Take this road. Nearly 17 miles along, a road will branch left, cross the river, and become gravel. DO NOT take this road. Instead, stay straight, and the road will soon turn to gravel (well-maintained and probably passable even to a Corvette), enter the mountains, and take you through some gorgeous mountain scenery that almost no one outside Montana knows is there. About 20 miles from the fork mentioned, the road crosses the North Fork Teton River and ends at the West Fork Cabin Complex. Maybe 0.1 mile before crossing the river, look for an old roadbed on the left side of the road. There was a gate but no sign there when I was there in 2003. That roadbed is the beginning of the trail. It is the West Fork Teton Trail and is on the Mount Wright topo map. There is ample parking on the other side of the river and sparse parking closer to the trailhead. Just park in the large area and spend an extra minute walking so you don't block the road at all or run over the vegetation. 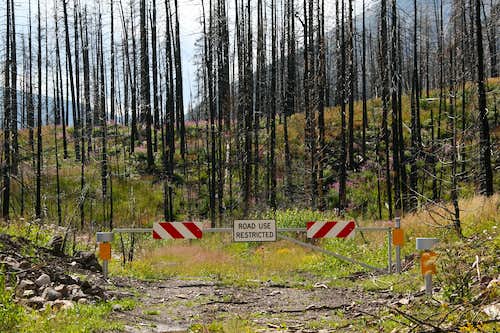 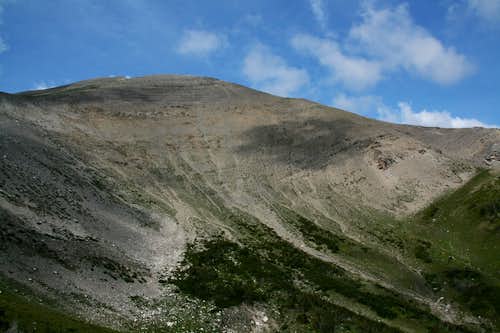 The summit from the 7400' saddle
This Class 1 route is easy to follow and yields great views well before you reach the summit. From the summit, gawk east at the ridges and peaks of the Sawtooth Range's eastern front, north across Bob Marshall Country to Glacier National Park, south to Rocky Mountain--highpoint of the Bob Marshall Wilderness Complex, and west over seemingly endless ridges stretching deeper and deeper into the true wilderness that is "The Bob."

Go early to avoid thunderstorms and crowds. I can't imagine crowds here like those on popular trails in national parks, but the trail is a popular one. Or go on a weekday-- I spent a Tuesday night camped near the summit so I could enjoy the mountain both in the afternoon and in the morning, and I saw no one else the entire time. 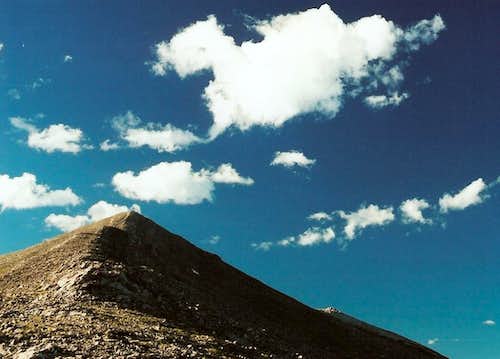 The summit from the 8400' saddle
The crux, if you can even call it that, is noticing the Mount Wright Trail branching right at about 0.2 mile along the West Fork Teton Trail. After that, you just need your legs and lungs. From the trailhead, it is almost 3.5 miles to the summit, and there is 3245' of elevation gain. The suffering from this may not be that bad because you will probably stop frequently to admire and photograph the scenery.

At almost 2.5 miles, there is a saddle at 7400'. There is a short but exciting stretch just after the saddle as you climb along some rocky, exposed (for a trail) ledges amid scattered stands of krummholz trees. Then you reach timberline and climb a talus slope to a saddle at 8400' between the north and south summits . The trail bends right (north), and you reach the summit in less than half a mile. The ruins of a lookout are up there, so watch where you sit, and then stare all around. 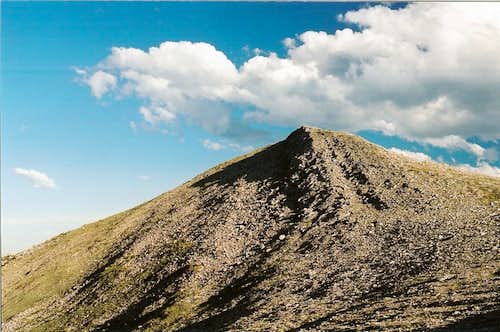 South summit
The south summit on Mount Wright is a little lower than the main one and does not have the prominence to count as a separate peak, but it has some unique views and is worth a visit. Plus, it is a very quick trip up (just a few minutes) from the 8400' saddle. 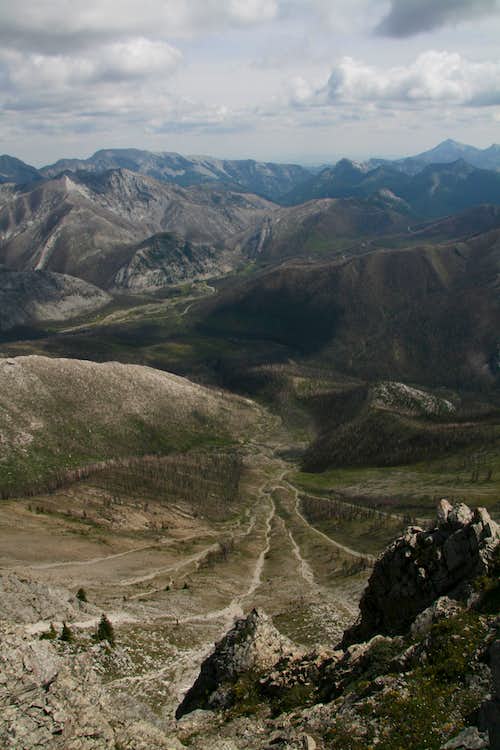 This little peak, which also does not have enough prominence to qualify as a separate one, is an easy scramble from the 7400' saddle. Consider tagging it as well, as it won't add much time or trouble to your outing. It also appears from maps and observation that one could follow one of its ridges almost directly back to the trailhead, cutting some distance, but I have not tried this myself and cannot vouch for the conditions one might encounter. 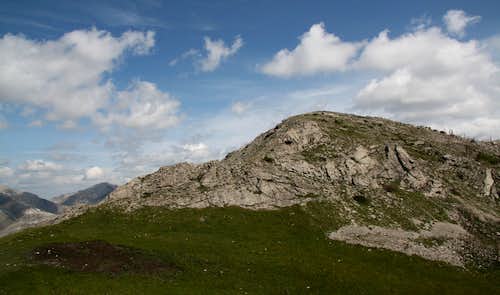 There is a campground about fifteen miles back along the way (Cave Mountain Recreation Area), and there are numerous opportunities for dispersed camping.