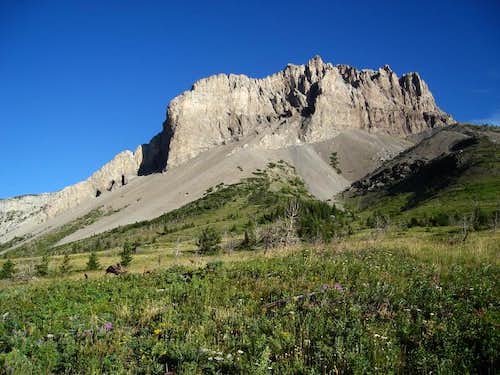 Mount Frazier from the east.

Mount Frazier is on the eastern boundary of the Bob Marshall Wilderness about 25 miles west of Bynum, MT and on the divide between Blackleaf Creek and the South Fork of Dupuyer Creek. When approaching the mountains on the Blackleaf Road, Mount Frazier is the peak most likely to attract the attention of climbers. Like many of the peaks in the Sawtooth Range of the Rocky Mountain Front, its eastern aspect is spectacular. The east face of Mount Frazier is almost a mile wide and just over 1000 feet high. The south shoulder actually overhangs for a considerable distance and the north edge is nearly vertical. But, also like many of the other peaks in the area, its western side is far more gentle with a ridge that provides a Class 2 scree and talus route to the summit. For those looking for something between the scree and talus and the surely technical east face, the south ridge offers a Class 3 route.

From Bynum, MT , follow the Blackleaf Road about 20miles to mouth of Blackleaf Canyon and the trail head of Trail 106. The road is passable by passenger car, but it does get a little rough for the last half mile or so. Trail 106 up Blackleaf Canyon takes you to the start of both the South and West Ridge Routes in about 2.5 miles. The trail is relatively gentle to this point and very well maintained. This is grizzly country, so travel and camp in the back country appropriately. 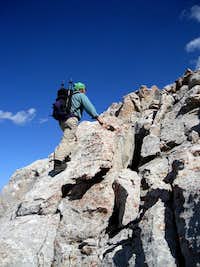 On the S Ridge

West Ridge, Class 2 (scree and talus). This is a great descent route providing some really nice scree running. Climbing up the scree is, of course a different story. Follow Trail 106 about 2.5 miles to the first drainage / creek bottom past the south side of the mountain at about 6,250 feet. The creek is intermittent and will probably be dry later in the season. From here, follow the creek bottom north into the basin below the saddle between Mount Frazier and the unnamed peak to the west. Attain the West Ridge at the saddle or above and follow it to the summit. A hint for the descent – once you reach the brown rock above the saddle there is great scree running down into the basin. It is not necessary to go all the way down to the saddle. South Ridge, Class 3. This is a far more sporting route to the summit than the West Ridge with the added advantage of reasonably stable footing along with some nice Class 3 scrambling. See the route page for details.

Click on images for larger size with captions and peak identification. 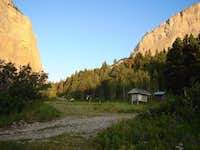 Camping is not allowed within 200 feet of the trail head. There is an excellent campsite just about exactly 200 feet east of the trail head. There are also several good camping spots along the road to the east between the last cattle guard and where the road starts down to the trail head. You can camp anywhere along the road in this area, but you must keep your vehicle within 300 feet of the road. Camping is possible in Blackleaf Canyon and we did see at least one established campsite. However, be aware that cattle are being grazed in the canyon much of the year. The mouth of Blackleaf Canyon is infamous for its occasional fierce wind. Hope that it isn’t blowing when you are there, but be prepared.

While it is not on Mount Frazier you will be passing by and / or be camped near one of the better sport climbing areas in Montana - the major cliff on the south side of the canyon entrance. Details of the routes can be found in Central Montana Rock by Jake Mergenthaler.