Old Man of the Hills

Flanked by the north and south forks of Dupuyer Creek along Montana's Rocky Mountain Front, the evocatively named Old Man of the Hills is among the most distinctive peaks of the Sawtooth Range. The Old Man is notable for its unusual shape—a jumble of ridgelines, towering cliffs and spires, gullies and scree slopes. Viewed from any point to the east, it looks like a convoluted peak to climb, and multiple approaches to its summit are indeed possible. The standard route described here approaches the peak from the south, beginning at Blackleaf Canyon. One-way distance to the peak is about six miles, with a net elevation gain of 3,000 feet. 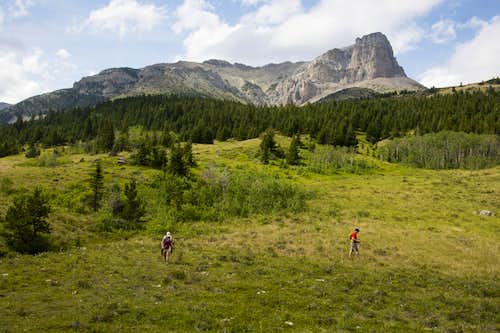 Old Man of the Hills-Southeast Basin
It's also possible to climb Old Man of the Hills from the north fork of Dupuyer Creek, and this shorter approach is more viable for a day hike, at the expense of rougher roads leading to the trailhead. See the links at the bottom of this page for more details.

To climb Old Man of the Hills from the southeast, start at the trailhead at the mouth of Blackleaf Canyon. To reach this point, drive Highway 89 northwest from Choteau to the tiny town of Bynum. Turn left at the small sign for Bynum Reservoir next to the old grocery and then turn right at the schoolhouse. Follow the road for four miles to the reservoir and then another nine miles to the junction with Forest Road 145. Turn left onto this road and travel for a mile to a crossroads where you'll take a right, then about two more miles where you'll bear left. Finally, drive about four miles to Blackleaf Canyon. The road here has one spot which might contain water early in the season, but most SUVs or trucks shouldn't have trouble. Park at the trailhead. 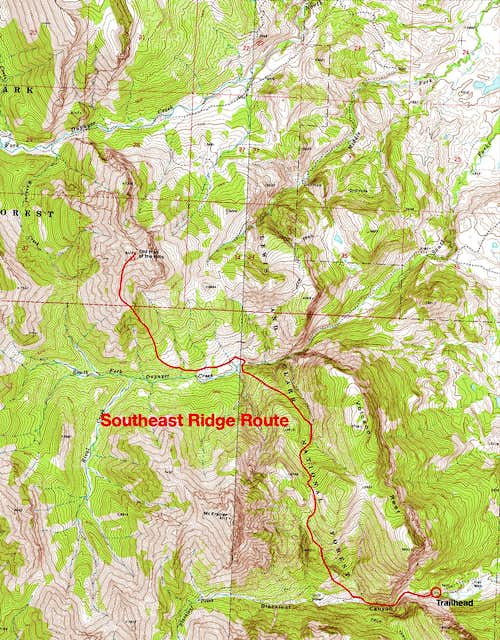 Old Man of the Hills Map

The Hike
There aren't many trailheads more spectacular than the one at Blackleaf. Giant limestone walls loom above on both sides as you hike west along the creek bed. Look up at the lefthand cliffs, and you'll probably see small figures clinging to them, as Blackleaf is a well-established rock climbing area. Cross the creek at the western end of the lefthand cliffs, and hike up an old road-turned-trail bed. Pass through a barb-wire gate and enjoy the view as Mount Frazier begins peeking out above the trees ahead. The trail eventually descends to the creek and crosses it again, leaving you on the north bank amid open meadows. As you approach the one-mile point, begin watching along the righthand side of the trail for a small cairn; it marks the trail which runs north to the south fork of Dupuyer Creek. You'll know you've missed if you reach a trail sign on the righthand side of the path. If so, the cairn is only a short way back in the direction you've come from. 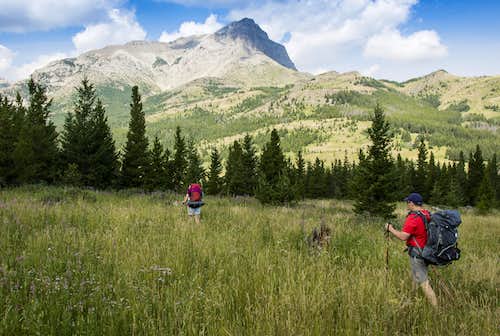 Hike in to Old Man of the Hills

Head north on this trail for three miles to the South Fork. The trail will climb steeply for about a mile to the divide between Blackleaf and South Fork drainages. As you climb, Volcano Reef will be the ridge to the east, and the spectacular east face of Mount Frazier will loom above you to your left. This stretch feels a bit reminiscent of hiking below the sheer cliffs of peaks in Glacier National Park. Once you reach the top, the trail will begin to descend through woods where herds of cattle might spook you as they bolt across the path, and eventually you'll break out into open meadows where you'll get your first good views of Old Man of the Hills and the scenic valley to the west. The trail will descend through slopes dotted with paintbrush and fireweed, and you'll pass a small sign indicating that the wilderness boundary is not far ahead. A short distance beyond this, the trail drops to the crossing of the south fork of Dupuyer Creek.

The Peak
From the stream crossing at the south fork of Dupuyer Creek, walk north and west until striking a faint Jeep track in the meadows above the creek. If you're going to camp before climbing the peak, you'll find excellent campsites along the stream bed within a quarter-mile or so. To reach the peak follow the Jeep track until it becomes a more solid trail bearing west, and examine the peak to locate the southeast ridge near the center of its large mass. The southeast ridge will appear as a conical, partially vegetated ridge with a series of rocky outcroppings at its top. As you near the closest approach to the southeast ridge, a sign marking your entry into the Bob Marshall Wilderness will appear on the right. (As of August 2014 the wooden sign was present but had fallen off its post.) A spur trail at the sign climbs upward to the right; follow it a short distance and look for one of several open slopes that run upward toward the southeast ridge. Walk north toward the ridge, bushwhacking here and there as you climb.

Soon you'll see a band of low cliffs running across your path; choose a route upward over small talus slopes through a break in the cliffs. Atop the cliffs you'll find an open plateau that slopes upward toward the base of the southeast ridge. Head at the ridge and begin climbing it, aiming toward the rocky outcrops at its top. Mixed vegetation and scree cover the ridge, so watch your footing as you move upward.

As you gain the ridgetop, angle up around to the left (west) side of the ridgetop to bypass the steep cliffy face of the first large outcrop. The going is mostly easier on this side but at least one outcrop can be bypassed on the righthand side of the ridgetop. Pick your way upward on whichever path seems best. Once you're above the last outcrop, the southeast ridge will flatten into a broad slope of white rock which connects to the main mass of the mountain. Keep your eyes peeled—you might notice the USGS section marker post driven into a small pile of rocks along the way, and bighorn sheep may also be spotted in this area. Walk north till you're at a good point to begin traversing the upper southeast basin toward the summit.

On the upper basin, the steep slopes of yellow and reddish rock present treacherous footing, so take care and rest as needed as you plod up and to the right. It's a longer distance to the summit than it appears, and tiring on a hot day. Small rock outcroppings on the left below the steep cliffs of the main west ridge might provide better footing. Aim for the right-hand base of the summit block ahead, composed of the same whitish rock as the upper southeast ridge. Your footing will be much better once you're on these more stable blocks, and you can then climb directly upward to reach the summit.

Once on top you'll be rewarded with spectacular views in all directions. The Great Plains yawn out before you to the east, peppered with small lakes and views to the Sweet Grass Hills beyond. To the north, the Old Man's lower northern summit ridge lies just below, with the high peak of Walling Reef beyond. On the horizon, the southern peaks of Glacier National Park can be seen. To the west, the vast territory of the Bob Marshall and Great Bear wilderness areas stretch out, ridge beyond ridge. Looking southward, the "devil's horns" of Old Baldy and the high summit of Rocky Mountain Peak dominate the horizon in spectacular fashion, and due south is the sharp crag of Mount Frazier, with the curious pointed summit of Ear Mountain beyond it. You can retrace your entire route from the creek here, and appreciate the size of the basin you've just crossed.

On the descent, take special care while crossing the sketchy rock of the upper basin; it's all too easy to slip while downclimbing across the nasty scree on this face. Once you've reached the top of the southeast ridge, the going will be easier, and you can retrace your steps to the creek or your camp.

Old Man of the Hills from the Summit of Mount Frazier

The hike and peak are located in the Lewis and Clark National Forest and the Bob Marshall Wilderness. No permits are required.

Sunrise over the south fork of Dupuyer Creek Canyon

The summer and early fall are ideal times to climb, after the winter snows have disappeared. Winter climbing is possible with proper gear and technique.

If you attempt the climb as a long day hike, you might not wish to drive home that evening. If so, camp just east of the Blackleaf trailhead, which has a restroom available. There's usually a small but festive collection of tents and campers belonging to the rock climbers here to try the spectacular routes in the canyon. 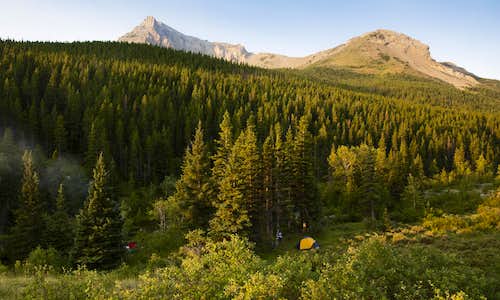 South Fork Dupuyer Creek Camp
If you're going to camp in the backcountry as part of the climb, there are ideal sites near or along the south fork of Dupuyer Creek just west of where the trail crosses it. The summit of the Old Man is only two miles from this area, making a half-day climb possible. On the return to the trailhead you may retrace your steps or choose to complete the Volcano Reef loop by hiking north and east and eventually south toward Blackleaf Canyon.

Good information on other routes up the peak are available at Tom Kotynski's blog:

Out There with Tom: "Old Man of the Hills, Walling Reef in the Front"

Out There with Tom: "Old Man of Hills in stifling heat"


For additional details on the approach hike, the complete Volcano Reef loop, and other hikes in the region, consult: