The Rocky Mountain Front—the range of dramatic peaks jutting abruptly above Montana's eastern plains in the area between Great Falls and Glacier National Park—includes a series of iconic peaks, including Crown Mountain, Sawtooth Ridge, Castle Reef, and Ear Mountain. Another icon, and the southernmost big peak on the Front, is Steamboat Mountain, which anyone familiar with the area can point out. But which Steamboat Mountain is it?

Steamboat Mountain, on the horizon at left, as seen from Square Butte with Crown Butte in the foreground.
It turns out that in the jumble and confusion of topographical naming schemes, there are actually two Steamboat Mountains, which are neighbors and essentially part of the same geologic mass. Even on maps it can be hard to tell who's who due to the overlapping names, but the iconic peak we all know as Steamboat Mountain is perhaps more properly identified as Steamboat Mountain East—and even its features are a bit confusing on the topo map. Nevertheless, this description is designed to get you to the top of that peak. The elevation gain from the trailhead to the summit is 3400' over about 5 miles—a steady pull, but without any serious climbing other than a few scrambles up some short jumbled stretches of rock. 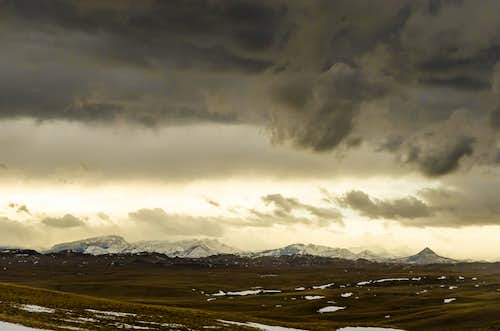 Steamboat Mountain at left with Haystack Butte at right, just ahead of a looming spring storm.
From Augusta, head southeast on Road 435 (The Bean Lake road.) You'll gradually approach the mountains, with the cone of Haystack Butte looming above. If you're old enough to have seen a lot of 1970s cinema the drive may look familiar; several scenes from Michael Cimino's debut film, Thunderbolt and Lightfoot, starring Clint Eastwood and Jeff Bridges, were shot here—including the bizarre "rabbits in the trunk" sequence. In early summer, this area is often overwhelmed by riotous growths of arrowleaf balsamroot nearly as far as the eye can see. 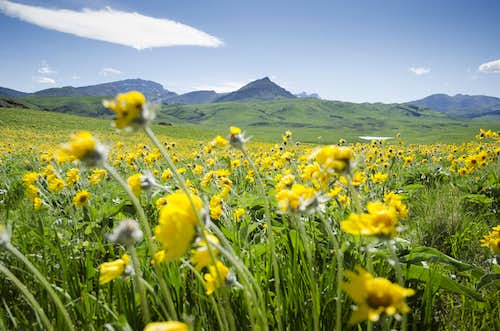 Arrowleaf balsamroot below Steamboat and Sheep Mountains.
After 15 miles, turn right at the Dearborn Canyon road and pass Bean Lake on your right. The road will then wind into the canyon, past the Diamond Bar X ranch and the gate to the church camp. A short distance farther will be the parking area for the trailhead, with parking for foot traffic on the right and spots for horse trailers on the left.

At the trailhead is a sign indicating where the hike begins. The first two miles cross private ground through the nearby church camp and residential cabins along the Dearborn 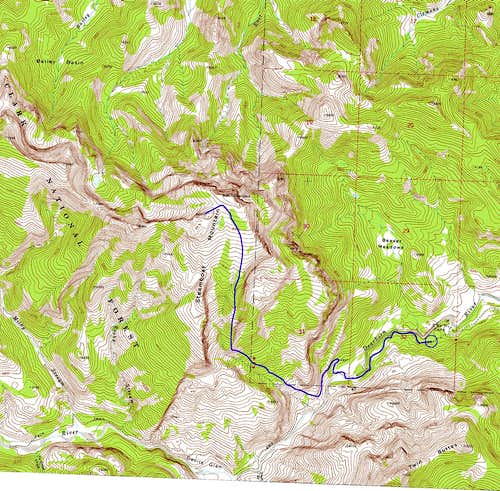 Steamboat Mountain Route Map
River. The path parallels the road, but please stay on the trail to respect the access arrangement in place. Eventually the trail will lead you across the road; follow the fence line on your left down to the footbridge crossing the river. Pause to catch the view before crossing to the north side of the river. The path will now gain some elevation as it climbs out of the river gorge, across an open meadow, and then north toward the first cliff ramparts of Steamboat Mountain.
The trail will soon switch back and travel south as it heads toward Devils Glen. From this point, begin looking for the Lewis and Clark National Forest boundary sign. Just a short way beyond it you'll see a small pile of stones on the right with a faint path leading off and northwest. This is the beginning of the climb to the top.
Follow the trail as it aims north, up a gradually increasing wooded slope. Early on you'll climb a couple of bare steep slopes with lousy footing. Above this stretch, the trail resumes upward through the trees. Above you you'll see an imposing wall of cliffs ahead, which appears to cross the entire route ahead of you. Continue along the trail into a wooded basin below the cliffs. You'll pass a "no hunting" sign at one point. Eventually the trail will aim due north, leading you up a steeper slope which becomes a more defined wooded ridge line.
Climb up this ridge as the massive cliffs loom above you to the left. The ridge will eventually open up into a really interesting area—the Rock Garden. This break in the ridge is a jumble of giant boulders strewn about in a shallow basin. It's an interesting area to explore in its own right, if you have some extra time on the ascent or descent. To continue the route, hike up through the Rock Garden as it gains elevation along the ridge. Soon you'll be confronted by a small cliff across your path which ascends upward to the right. Climb up to the right-hand corner of this cliff and you'll find an easy break up through it.
Scramble up the break to regain the main ridge, which will soon open up into a mix of timber and little parks. Try not to have a heart attack every time you flush a grouse from the ground cover as you climb. To your right you'll see the band of cliffs which makes up the southern end of the iconic Steamboat Mountain profile begin to come into view, with a dramatic detached spire at its edge. On your left will be the northern end of the huge cliffs you hiked beneath earlier in the basin below the ridge line. The path to the top lies straight north. Eventually you'll see a series of bare, rocky humps ahead of you and to the left. This is the summit area, but the best approach is to keep heading north till the ridge opens into a large open park which leads up to a saddle between the summit humps on your left and the bare, grassy peak on your right, labeled "Dearborn" on the map. 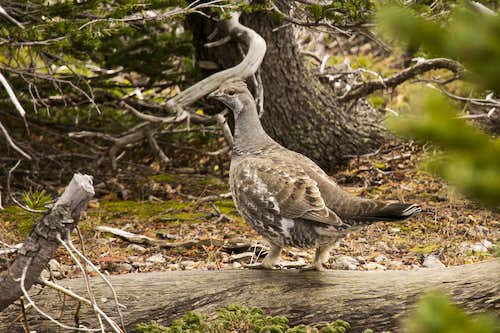 Grouse—the coronary-inducing game bird of the Rockies.
Hike up till you're at or nearly at this saddle. From here, the large rocky humps to the west are reached by scrambling up a talus field to the top. You'll see two main prominent humps of rock. The northern (right-hand) hump is the summit of Steamboat Mountain East. Both humps can be climbed within a few minutes of each other just to make sure. From the top, the views to the west are dramatic, including Red Mountain, the highest peak in the Scapegoat-Bob Marshall-Great Bear wilderness complex. You can view the bulk of the Scapegoat Wilderness, and north into the Bob Marshall Wilderness. A series of rocky pinnacles lead north from your perch to a series of pointed summits, which make up the "other" Steamboat Mountain, and the former location of a fire lookout. To the north, a few of the icons of the Front can be seen, including Rocky Mountain Peak and Ear Mountain. Out on the plains, the Sweet Grass Hills can be seen on the northeastern horizon in good weather, and the volcanic stock of Haystack Butte dominates the nearby foothills. To the southeast, the trio of Square, Shaw and Crown Buttes appear below the distant island range of the Highwood Mountains, and to the south are the Little Belts and Big Belts.
Once you've taken in the view from the top, you should definitely hike back down to the saddle and up to the grassy "Dearborn" summit, which is the high point of Steamboat Mountain East's classic profile as seen from the plains to the east. It's only slightly lower than the main summit, and the views are better. Hold onto your breath as you reach this point; the cliffs drop away on both sides to the east for hundreds of feet below you. From here you can look back down to the road in and take in all of the foothill country below. It's a great lunch spot if the wind's not howling too much.

View from Steamboat Mountain East's "Dearborn" summit, looking north.
The descent simply reverses the climb, although you can follow the ridge from the Dearborn peak down till it meets up with the main route above the Rock Garden if you want a scenic alternative. When you exit the south end of the Rock Garden, take care to find the correct path, as it's a bit harder to spot on the way down. If you're not sure you're headed in the correct direction, just make sure you don't travel too far to the right (west) down into the ravine between you and the huge cliffs.

The trail crosses private ground for several miles. Please respect the instruction to stay on the trail at all times. The remainder of the hike is located within the Lewis and Clark National Forest. Obey all hunting, camping and fire restrictions in place.

Late spring through fall are the ideal times to climb, although the peak could certainly be reached in any season with the right experience and gear.

Tom Kotynski's excellent blog provides more information about the region, and his Discover the Rocky Mountain Front is the bible for day hikes in the area, including a route description for the Steamboat Mountain Lookout—the "other" Steamboat Mountain.