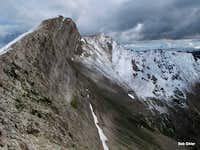 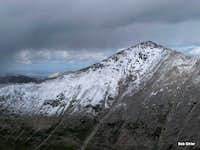 If you want a remote peak, then starting out in a rural part of Montana and driving almost 40 miles, most of it on unpaved roads, to a trailhead and after that traveling 10 miles to reach a summit might satisfy your requirements. Such is many a peak in Bob Marshall country. Such is Mount Patrick Gass.

The peak overlooks an ocean of mountains to the north (all the way to Glacier National Park on a clear day), south, and west (across the heart of the massive Bob Marshall Wilderness, one of the largest roadless areas in the country); to the east, it overlooks some prominent mountain ridges and then the expanse of Montana's share of the Northern Plains. For those who yearn for visions of America as it was before the wheels of development rolled through it, this is a peak that will give it. For those who yearn to be with the mountains and their natural denizens on their own terms, this is the place for it. For those who want solitude and a sense of pioneering, this area is good for it. But for those who want a predictable and pedestrian taste of nature and are making checks on a list, this is not the place for that. This is wilderness that will inspire you and challenge you and has more than a little potential to break you.

So in other words, anyone in love with the true spirit of the mountains is likely to find rapture out here.

...He joined the Lewis and Clark's Corps of Discovery as a private on January 1, 1804 and was promoted to sergeant by vote of the Corps members after Charles Floyd's death from appendicitis on August 22, 1804. His skill as a carpenter was important to the expedition— he led the construction of the Corps' three winter quarters, hewed dugout canoes, and built wagons to portage the canoes 18 miles around the falls of the Missouri. On the return trip, Gass was given command of the majority of the party for a short period while Clark and Lewis led smaller detachments on separate explorations.

He remained in the army after the expedition returned, serving in the War of 1812, in which he lost an eye, and fighting in the battle of Lundy's Lane. During the Civil War, Gass at 91-years-old had to be removed from a recruiting station after he wanted to enlist to fight the rebels. (WIsdom of History by J. Rufus Fears). At the age of sixty he married Maria Hamilton, aged 22. She bore 7 children (5 surviving to adulthood) over the remaining 15 years of her life. They settled in Wellsburg, West Virginia where he died, 98 years of age, the last surviving member of the expedition.

He kept a journal that was published in 1807, the first published journal from the expedition. In it, he coined the term “Corps of Discovery”. The book was first printed and sold by subscription in Pittsburgh at $1.00 per copy. It was later reprinted in England, and translated into French and German. A reprint is currently being sold by the University of Nebraska Press [2] and the University of Nebraska at Lincoln online version of the Lewis and Clark journals [3] give 222 entries from Gass's journal."

About four miles north of the Rocky Mountain Ranger Station in Choteau, look for a road indicating fishing and skiing access and heading west. Take this road. Nearly 17 miles along, a road will branch left, cross the river, and become gravel. DO NOT take this road. Instead, stay straight, and the road will soon turn to gravel (well-maintained and probably passable even to a Corvette), enter the mountains, and take you through some gorgeous mountain scenery that almost no one outside Montana knows is there. About 20 miles from the fork mentioned, the road crosses the North Fork Teton River and ends at a place called the West Fork Cabin Complex. There is ample parking on the other side of the river. The trail you want begins on the eastern side of the river and heads north.

Start hiking up the gentle North Fork Teton River Trail. About a mile in, you cross the river (only knee-deep and easy in August 2012, but it could be dangerous earlier in the summer or in the spring), also officially crossing into the Bob Marshall Wilderness. At 2.6 mi. you cross it again, and at 2.7 mi, there is a junction with the Bruce Creek Trail. My copy of Erik Molvar's Hiking Montana's Bob Marshall Wilderness says the junction is poorly marked, but I found an old yet perfectly legible sign there in August 2012.

Turn left to follow Bruce Creek now. In just 0.1 mi you cross the North Fork yet again. For 2.7 pretty dull miles, you hike through dense forest, gradually gaining elevation, to a crossing of Bruce Creek (5.5 mi from the TH). Shortly after that the trail begins climbing more earnestly and views start opening up. Especially impressive the higher you get are Mount Wright to the south and the cliffs of Corrugate Ridge to the west.

7.3 miles from the TH, you cross the headwaters of Bruce Creek and start heading up some switchbacks to a 7730' pass crossing into the drainage of Nanny Creek (7730' is dense undergrowth in the Colorado Rockies but is above treeline up here). You reach that pass at 8.5 mi, where you finally get the 360-degree views you have been yearning for, and at that point, you also get a good look at Mount Patrick Gass and get to try to talk your spouse into climbing it with you as you point out the ridge and how straightforward it looks. Then your spouse declines and decides to hang out awhile and then return to camp. Secretly happy to get some alone-time, you head off for the peak. 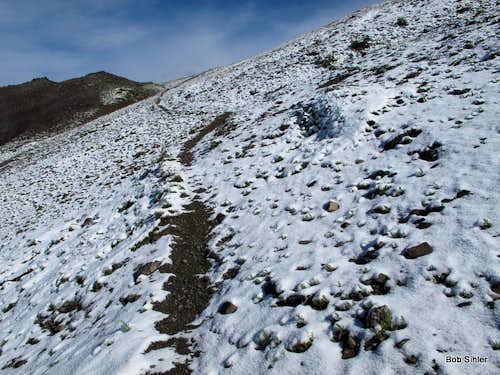 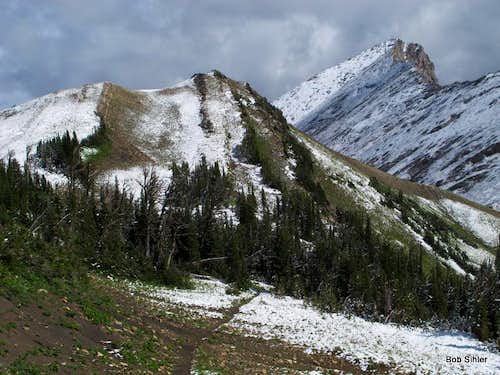 But first you have to hike another half-mile, this time downhill, to another pass, this one at 7590'. This elevation loss of 140' is the only notable one of the entire route.

Finally, 9 miles from the car, it is time to get off the trail and go for the mountaintop. Nine miles of trail hiking and one of mountaineering may not seem like a fair mix, but the views you get from these peaks and the feelings you get atop them are worth it. 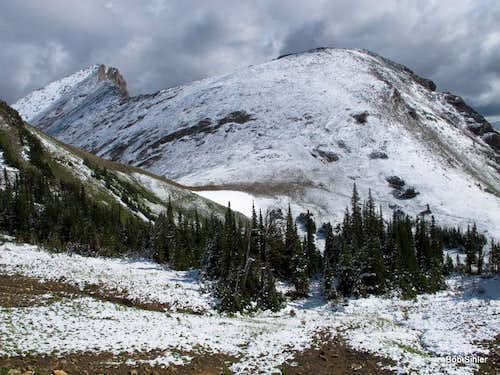 Now enjoy the rest. Most of the going along the ridge is Class 2, but there are occasional spots of Class 3 to keep it fun, and there is almost always extreme exposure on the east side of the ridge to keep things interesting. Many peaks in the Rocky Mountain Front are like this, with sheer east faces and steep, slabby slopes on the west side up high. Anyone not liking the exposure along what is virtually a knife-edge on the crest can bypass to the west, but it will entail some annoying elevation loss to do so. 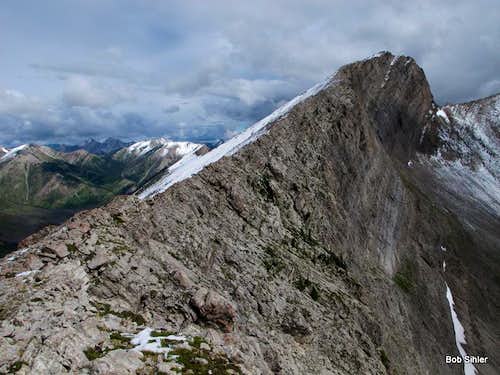 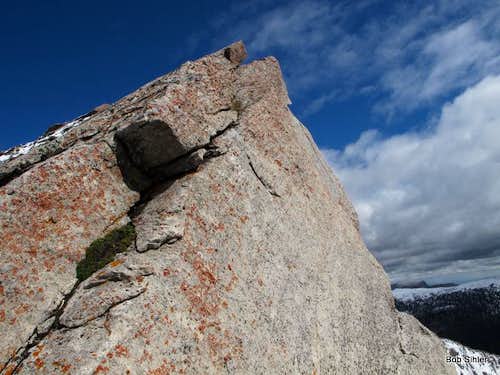 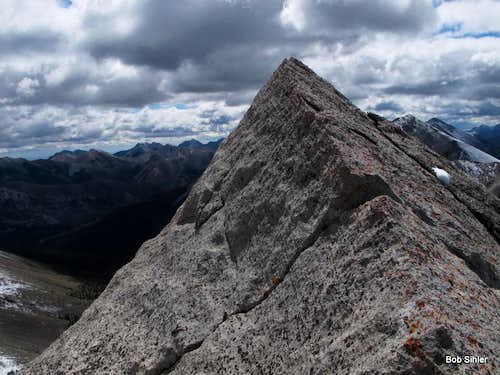 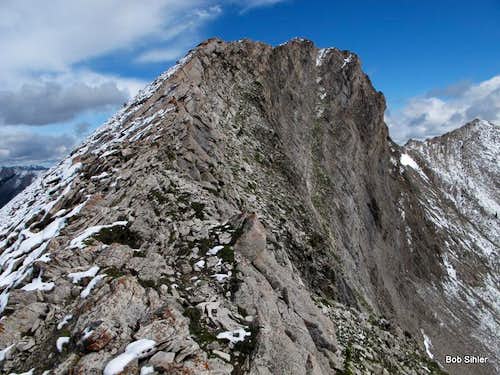 Another cool thing about the summit is that although the side of "the Bob" east of the Continental Divide does not have a lot of lakes, one of the few is visible from here. It is unnamed.

If this mountain, for its form, its views, and its long approach, does not fire your mountaineering spirit, then you're either hopeless or hopelessly spoiled. Go back to Disney Land and get your jollies on Space Mountain or go back to the Karakorum (where most of us can only dream of being).

Note: It is possible to approach from the north, but I am unsure of whether the approach would be shorter or longer. Since I have not been that way, I recommend using the Falcon Guide Hiking Montana's Bob Marshall Wilderness by Erik Molvar. It does detail the trail system involved.

Where are they? Surely, they must be marvelous. They are! Sometimes, I think it "spoils" the climb to splash the summit views all over the page instead of letting climbers "discover" the views themselves. This is one of those cases. Those images are in this page's gallery. However, the display on this page only focuses on the peak and the route to and up it. 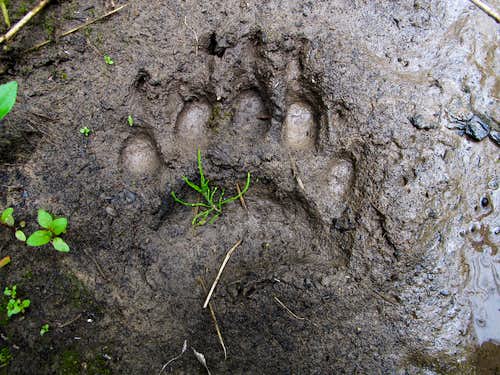 Almost anyone doing this climb is going to backpack in, but if you must go for it in a day, there is a campground about fifteen miles back along the way (Cave Mountain Recreation Area), and there are numerous opportunities for dispersed camping, including at the road's end.