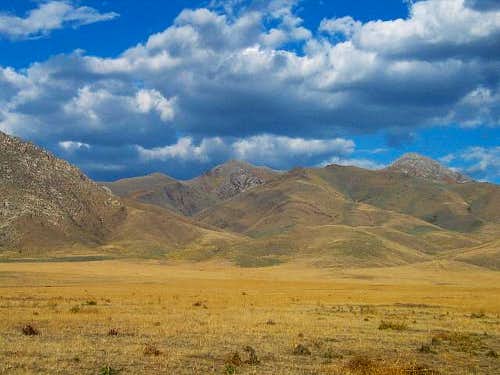 The highest peak in Humboldt County, Nevada is Granite Peak, which is easily seen from U.S. highway 95 as one travels from Winnemucca Nevada to points north in Oregon. Granite is an important peak to any who are chasing after the Nevada county highpoints as well as those who are interested in prominence peaks. Granite Peak comes in at number 18 in the state of Nevada with 4397 feet if prominence.

A register was found near the highest spot when we were there and the entries were interesting and quite
varied. A newer register holder was added a few years ago and there is a picture of it elsewhere on this page. This area is popular with locals and with hunters with a helicopter pilot also in the mix. Great views of the whole surrounding area as well as a place to avoid in a thunderstorm as Dennis Pouliln found out on his visit to the peak. The Santa Rosa mountains and Granite Peak are an enjoyable part of the state of Nevada.

The southern approach:
From Winnemucca, go north up US 95 and take NV 290 17.7 miles to Paradise Valley. Look for road signed, "Hinkey Summit 14." Pavement ends three miles north of Paradise Valley, and the road reaches Hinkey Summit at 14.5 miles. From here a steep, rough road leads 1.3 miles to a fence line. This road may not be suitable for passenger cars so you will need to assess the condition of the road for yourself when you get there. This rough road then levels out for a bit and the road passed through a marshy area, (dry later in the season) and this may be where you need to pull off and start your hike from. It is possible to take a vehicle (4WD) all the way to the fence line where the road ends.

The northern approach:
Going south on US 95 after passing McDirmitt, on the Oregon border, look for FR 084 at about the 14 mile mark. This road was signed "Buckskin Canyon Road". It was washboard for the first couple of miles then got better. After a few miles I passed a brown forest service sign that verified this was FR 084. The drive was about 25 miles to Hinkley Summit, a saddle at about 7900 feet. Again, in some vehicles you could go up FR 536 to a saddle at 8740 and park.

No permits were needed nor were any fees necessary. The peak is within the boundaries of the Humboldt National Forest and more information may be obtained from the US Forest Service at: Spring, summer and fall should all make good times to climb this peak. You will most likely encounter snow in the spring so plan accordingly. You may want to check with the Humboldt National Forest to find out about the condition of the road early in the season.

Camping is available at the near by Lye Creek Campground.
You can also camp at the end of the road that goes up from Hinley summit (just move the cow pies out of the way first)

You can stay in motels in McDirmitt or Winnemucca as well.

Want to know a little about the history of the Winnemucca area?
Go this this web site for some interesting history. 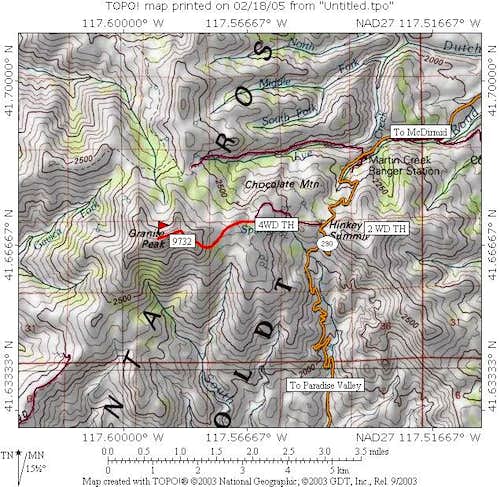 History
Humboldt County is Nevada's oldest county, created by the Utah Territorial Legislature in 1856. It was also one of Nevada's original nine counties created in 1861. Named for the Humboldt River which John C. Fremont named after Baron Friedrich Heinrich Alexander von Humboldt, a German naturalist, traveler and statesman. Humboldt never saw the places that bear his name. Unionville was the first county seat in 1861 until the mining boom died there and it was moved to Winnemucca on the transcontinental railroad line in 1873. Winnemucca is south of Granite Peak.

Fellow SP'er Bob Bolton and I had spent the night atop the Stevenson plateau, 15 miles north of McDirmitt, Nv after doing county highpoints of Harney County Oregon (Steen's Mountain)
and later that same day of Owhyee County in Idaho. The highpoint of Malheur county Oregon is a rather non impressive spot but it is murder to get to without the right vehicle. We hit the nasty part of the road leading up to the high country after dark and carefully made our way and just parked and flopped.
The next morning we got up, drove the rest of the way to the Stevenson highpoint and had a good view towards Granite Peak to the south, our next destination and goal. The drive back down to U.S. 97 was as hectic as the drive up. It'd be so easy to lose a tire on some of that stuff.

We found ourselves driving up the Buckskin canyon road a little after lunch (in McDirmitt) and working our way towards Hinkey Summit (a pass). Once or twice we had to stop to let cattle get off the roadway. When we reached the Hinkey summit, we found the road that took off towards our destination but it was only a good choice if you had decent clearance. We drove until we could go no more and stopped to change into our boots and hiking clothes. It was an easy hike to the summit with just one spot being class 3 but not difficult. Great views in all directions and an enjoyable way to spend an afternoon.

Several helpful trip reports can be found at the CoHp site, click here for the most up to date reports

Hiking or climbing in a mountain environment has many risks. Any who choose to participate in such activities must assume the responsibility for their own actions and safety. Any information provided here cannot substitute for your own sound judgement and decision making skills. For example, hiking into an electrical storm or during an electrical storm is reckless and dangerous. It is not my intent to describe every risk (weather, rockfall, animals, accidents, etc) that you may encounter on visiting this area but the author of this page is not responsible for your safety. You need to be prepared for the unexpected and proceed accordingly. This part of Nevada is pretty isolated and you may be the only one(s) in the area at the time of your visit. Do not expect cell phone coverage. All risks are assumed by the participant(s). Having said that, I wish you a great trip into this area but exercise care and caution to make your visit a safe one.

Shouldn't you also mention that you also installed a new register, Pete? I like the detailed "register rules" at the beginning......but Nevada peaks really don't need the "register policing" that typical California peaks do!

NM, I see that you posted a photo of the book, haha! Cutting those notebooks in 3rds does look like a good idea.

I was surprised, even given that I knew it was only 1900 feet from Hinkey Summit to Granite Peak, how quickly I was able to get up. That was surprise 1 when I summitted on 10/9/2014. The second surprise was just how steep and exposed the last hundred or so feet up to the summit was; pretty sure it qualifies as low-end class 3, at least in spots. As someone who doesn't usually do more than class 2, the class 3 was a bit intimidating, but manageable.