Hiking and scrambling in the Tatras

Hiking and scrambling in the Tatras

View from the train from Poprad to the cloud covered High Tatras. No hiking today.
I don't remember when I heard about the Tatras for the first time, but it was a long, long time ago. For many areas, summer is the prime season for hiking and climbing, and the Tatras are no exception. But with so many other places that are so inviting at that time of year, I had never gotten around to visiting them. This year I finally decided it was time. And I wasn't disappointed! 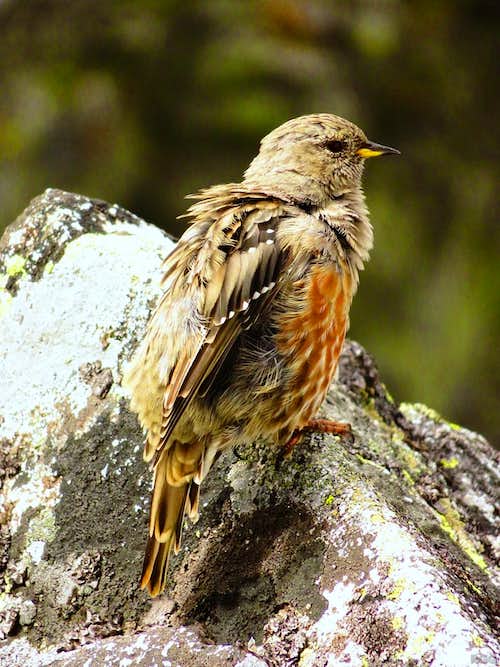 Alpine accentor (Prunella collaris) on Rysy
The start wasn't auspicious. The weather wasn't good, so I had a couple of rest days. But then things got better. At first, there were still some clouds, and the first two days I wasn't sure I would have a view from the summit - but I'm optimistic, and go out anyway on days like that, hoping for the best. And both on Kriváň and Rysy that worked out nicely.

One of the mountains I wanted to ascend was Gerlachovský štit. I browsed the internet for information about the routes and any other useful information. I learned that there are no trails to the summit, it's scrambling and climbing. Also I learned that hiking off the marked trails as well as climbing is heavily regulated in the Tatras. So, I needed to get good route information and make sure that I was allowed to climb Gerlachovský štit.

On the internet I found one (old) route description that looked good enough to give it a try. And in Stary Smokovec, in the office of the Mountain Rescue service, I got the green light to climb it, because I could show my alpine club membership card. The weather forecast for the next day was excellent - warm and sunny, and, most importantly, no chance of rain or thunderstorms - so I decided that I would wait no more. It turned into a much longer day than I had expected, but, fortunately, I had started early, and that meant I had just enough daylight to get back to civilization.

After a rest day, I felt invigorated again, and over the next few days I visited Slavkovský štit, Baníkov, Hrubá kopa, Tri kopy and Baranec. Shortly after I had safely descended the latter, the heavens opened, marking the end of an extended period of good weather as well as my farewell to the Tatras.

View Hiking and scrambling in the Tatras Image Gallery - 80 Images

You wouldn't have got their permission if you came from Poland, Czechia or Hungary, that is not from the West. One of their regulations is that except for winter, you must not do a route that is easier than UIAA grade III (approx. YDS grade 5.3) unless on the descent.

I didn't find anything in the rules that distinguishes between people's nationality. For me, the most relevant sentence in the rules was this one:


"Climbers are permitted to enter the National Park off the tourist and educational tracks and during the period of closures only for the purpose to ascend a peak with the grade II or higher on the scale of difficulty."

If this would be all, then climbing a grade II route would already be within the rules. However, a little bit further the rules say:

A second point is that I found it quite difficult to get a good and complete overview of all the main routes on Gerlachovský štit, including the grade. Without that, it would be impossible to know which routes would fall within the rules. To get answers, I asked around in Stary Smokovec, was referred to the mountain rescue center (I would have expected TANAP, but perhaps the mountain rescue center is part of that) and there I got the green light.

However, in hindsight I recognize that being a westerner may have helped. The man at the rescue center had a good command of English, but I can't rule out that he didn't quite understand me (or I him). The fact that I didn't have much knowledge about the area may have helped too. After the introduction, I said I wanted to climb Gerlachovský štit without a guide and I wanted to know if I my plan was within the rules. I also asked if he could help me to get more accurate route descriptions. And I showed my alpine club membership card. He answered that, yes, I was allowed to climb unguided, referred me elsewhere for route descriptions and rattled of a bunch of names of routes that I was allowed to climb - which, of course, didn't mean anything to me because I didn't have a good overview of routes yet. His answers were curt, and I couldn't help but get the impression that he wasn't happy with me going unguided, and that he wasn't keen to help me any more than he had to. Therefore I didn't ask him to repeat that list of routes. In fact, at that point I wasn't even sure I would try climbing it, because I didn't feel that I had enough route information just yet.

Next stop was the tourist info office in Stary Smokovec. They were very helpful, but had recently sold the last book with details about climbing in the Tatras, in which I might have found the route information I wanted. But they did have the 1:25 000 topographic map of the High Tatras, and that was a big improvement in my understanding of the mountains. Without it, the old route description that I had found earlier wasn't all that clear (so far I had used a 1:40 000 topographic map, but I considered that insufficient for climbing Gerlachovský štit). But with that better map, I read the route description once more and suddenly it made a whole lot more sense. The description never mentioned the name Velický žl'ab, not even Velický dolina, but looking at the map while reading the route description again, I concluded that that must be it. And though that description didn't put a grade to the route, it said that it was the route that Slovak guides use, so from that I assumed that a solo climber would be allowed to use it too. I also read somewhere that it was grade III, but when I later tried to find where I had read that, I couldn't find it anymore.

Now that I've climbed it, my own estimate is that the first five meters or so of the Velický žl'ab is UIAA grade III, but after that it's never harder than II. If the official TANAP is the same, then there is no problem. On the other hand, if they consider it II, then I was the fortunate victim of a misunderstanding, or of their reluctance to provide more information about routes than simply rattling of a list of names that meant nothing to me. Indeed, if they do consider it II, and had been able to provide good enough route information, I might have decided to climb the Krčmárov žlab instead, to stay within the rules.

Thanks for your interesting, comprehensive report.

When it comes to the first citation, the same passage on the park's page in Slovak (as a Pole I have no difficulty understanding some 95% of a text written in Slovak) says, "with a grade higher than II" instead of "with the grade II or higher". And we here know the problem only too well. For example, a piece (by mcc who is Czech) from a Ľadový štít climber's log: "We planned to get back by Horse, but on the summit we met guide with the client , he threatened us with fine, because we used II route (even with UIAA membership you have to use at least III ascent route, at least its what i heard ). Quite upset we lost motivation and got down by emergency descent (I) route to the west and through Sedielko back to the hut." Surely one's nationality does not matter to them, the rule applies to Slovaks as well, but I think that people generally tend to be more understanding when dealing with someone from a more 'exotic' country. Besides, I guess another reason may have been that they do not want to discourage potential visitors from the richer part of Europe. Or maybe, as you put it, you were just "the fortunate victim of a misunderstanding".

As for the rock difficulty of the route, their official grade is UIAA I (as I wrote in a comment on one of your pix, those "Tatra grades", especially the Polish ones, but sometimes also the Slovak, can be up to one and a half grade points too low). So, it seems we could agree that by West European standards the route, or rather its beginning, is at least UIAA grade II (when conditions are dry, which as you observed earlier might never happen). Anyway, good you didn't decide to climb the Krčmárov chute as it is notorious for rock avalanches.

I am glad you had a good time in the Tatras and hope you will visit those mountains, so dear to us all here, again some day.