Horsemans Pack, The Horseman and The Needle from the upper Neve Glacier. Taken by Paul Klenke
Often mislabeled as "The Needle" on USGS maps, The Horseman's Pack, with 472 feet of prominence is distinctly the second highest point on the Snowfield ice cap. Its close neighbor, The Horseman, is a technical spire rated at 5.7 and first climbed by John Roper in 1982. The rock is a dark grey crumbly orthogneiss from the Triassic Period (200-250 million years ago) and has the nick-name Needle Gneiss (probably adding further to the naming confusion). 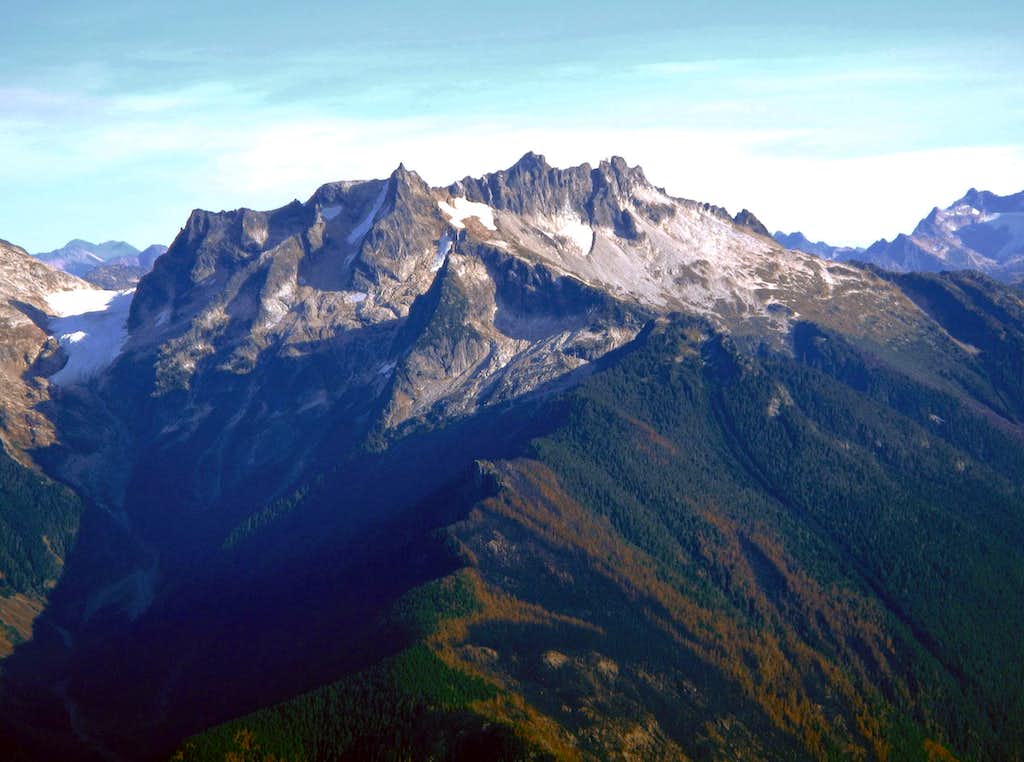 West Face of The Needle and Horsemans Pack
The base of this peak from the Neve Glacier is quite loose and parties looking to summit would do well to have a few yards of separation between each climber for safety as boulders will easily dislodge from undercut ledges. The final gully is very steep class 3 with plenty of air and very solid and ledgy holds. The views are filled with glaciers, spires and cascades making this a must climb for anyone touring the Snowfield ice cap or a nice addition to Snowfield Peak.

From Marblemount, head East on Highway 20 to milepost 126.8 where a small sign on the right designates Pyramid Lake Trail with a gravel pullout on the opposite side of the road (West). The trail meanders 2.1 relatively easy miles to the lake, which is a mecca for millions of nasty bugs but fortunately there is no camping allowed. The climbers trail begins going west then south around the lake and becomes quite burly in sections. If you're not up to the task, you'll know very early.

Best climbed June-October. The rock may be rime covered in winter and early spring making for a particularly spicy climb. Ice-axe, Helmet and crampons are a must have all year for the Neve Glacier approach. This whole area would make for a neat ski-tour but caution should be taken in later season when crevasses are open. Do not attempt when avalanche danger is high and keep proper avy gear (probe, shovel, beacon) and test slopes if traveling in winter conditions.

There is one south facing bivy wall at the Colonial-Neve col with room for two 84x54" tents. A constant breeze from the temperature gradient will usually keep bugs away. There is running water in later season from the base of Névé's West face. This is true wilderness so keep your food and any scented items away from camp and contained against bears (which have been known to roam the area) especially in summer and fall. It would also be wise to keep anything like rope, harnesses or boots out of reach from rodents who like to chew on gear if given the opportunity.

Youtube video by gimpilator of a Snowfield Peak trip that included Horsemans Pack: