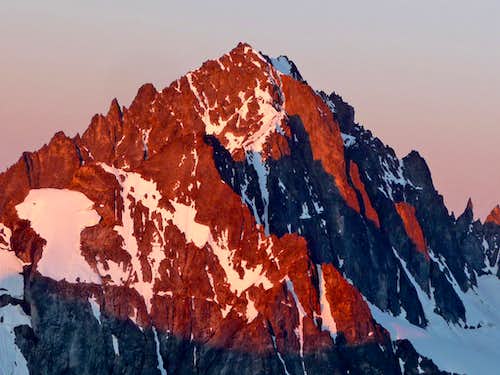 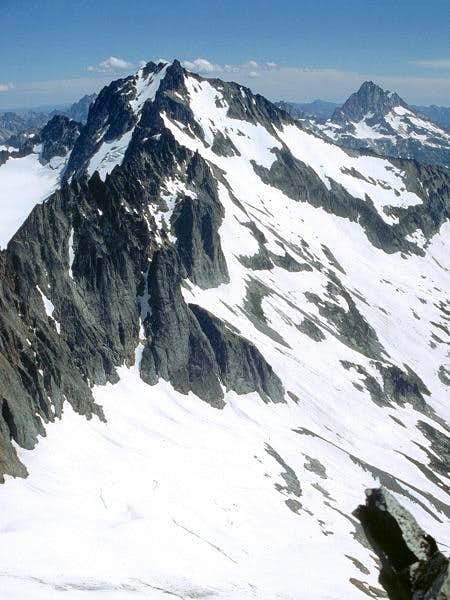 The peak is primarily summited from two directions. The North Face of Buckner Mountain, via the Boston Glacier, has long been considered one of the premier technical snow/ice climbs in the North Cascades. However, the standard (and least technically-demanding) approaches to the mountain are via its southwest side, either from Sahale Arm or the lower base of Horseshoe Basin. That is not to suggest that the southwest approaches are not challenging; only less technically-demanding than the North Face approach. Although it is possible to summit Buckner Mountain in one very long day, most people allow 2-3 days for attempts due to the mountaineering distances, terrain, elevation gain/loss involved, and to allow for unpredictable weather. 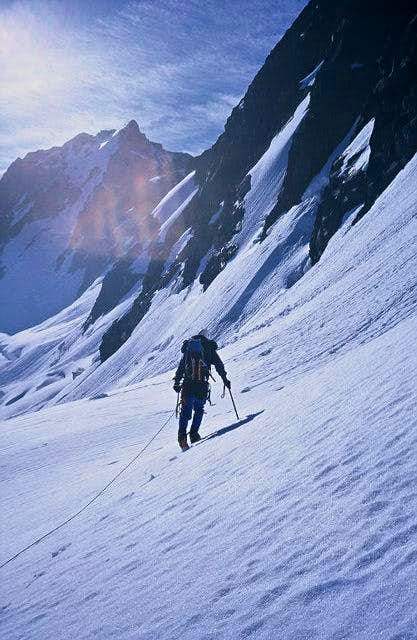 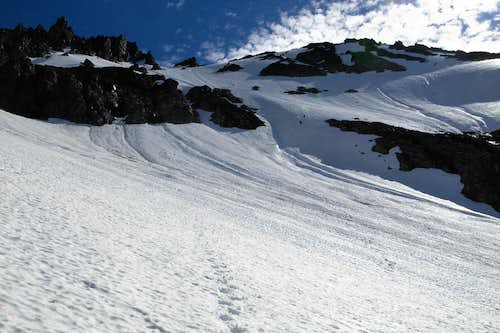 Looking At Southwest Slope Of Buckner From Horseshoe Basin

The peak is named after Henry Freeland Buckner, an early pioneer in the area. Henry Buckner traveled up Lake Chelan to the small settlement of Stehekin in 1898, and then began mining in Horseshoe Basin (further up the Stehekin River, on Buckner Mountain's southwest side) shortly afterwards. Buckner soon became the manager of a major mine located in Horseshoe Basin. The peak that would later become known as Buckner Mountain was first summited during this same time period, by Lewis Ryan on August 1, 1901. By 1905, Henry Buckner also was responsible for having a telephone line added to the basin. In 1910, a local settler named Lydia George, who had worked for Buckner as a telephone operator stationed between Stehekin and Horseshoe Basin and then later also his occasional cook, hired Buckner to build her a small inn. This would become Rainbow Lodge, a six-room house that became popular and famous with miners, tourists, explorers, and tourists coming to the area. Henry Buckner died in late 1910, and the highest mountain looming over his beloved Horseshoe Basin was named in honor of his importance to the area's development and exploration. 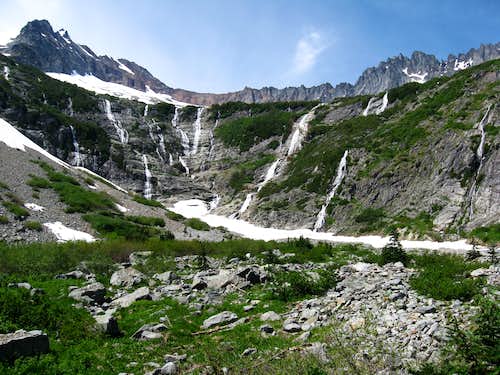 Looking Up From Lower Horseshoe Basin 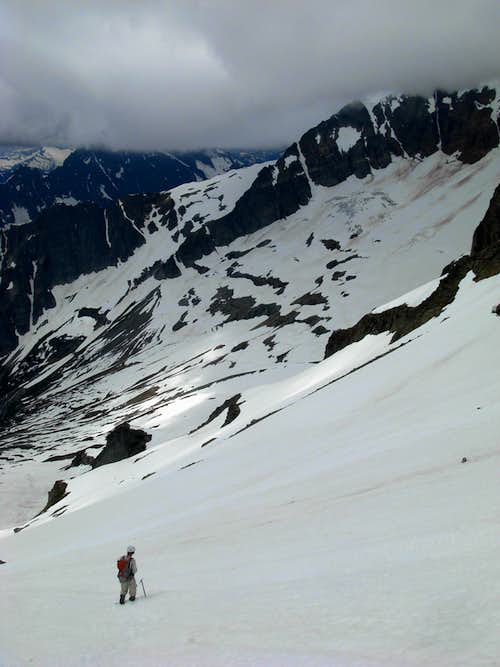 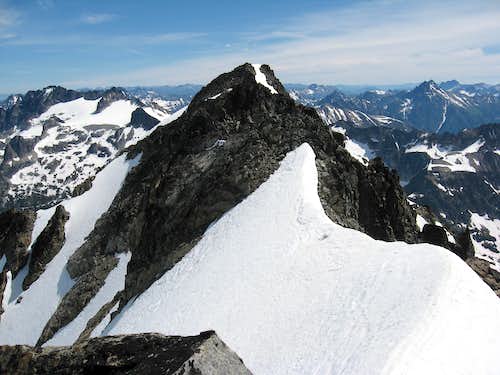 Several sources agree with the assessment that the southwest peak is higher than the northeast peak, if only slightly so. Fred Beckey mentions in his book, Cascade Alpine Guide 2: Stevens Pass to Rainy Pass, that despite both summit contenders having near-equal height "the Southwest Peak is estimated at 2 ft higher than the 9112-ft Northeast Peak." Jeff Smoot comments in his book, Climbing Washington's Mountains, that "while the exact height of the true summit is unknown, the southwest peak appears to be barely higher." Smoot later adds that "the southwest peak is reputedly the highest point, which is just as well, because the traverse to the northeast peak is a bit loose and scary."

The mountaineering website Peakbagger.com also estimates the southwest peak elevation being approximately 9114', only slightly higher than the northeast peak. Several other climbers have used visual interpretations and pixel-by-pixel analysis to determine that the southwest peak is the highest point by only several feet in elevation. 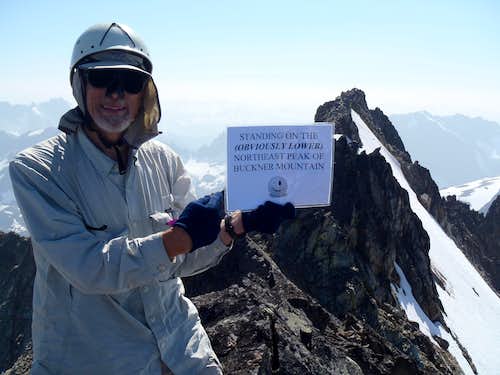 NOTE: If planning to traverse to the northeast peak of Buckner Mountain, it is best recommended to wait until late Summer/early Autumn when no snow or cornices block safe scrambling routes for that peak.

FROM ALONG HIGHWAY 20 IN MARBLEMOUNT, WA:

1) From where Highway 20 sharply turns north, veer east onto Cascade River Road, immediately crossing a bridge.
2) Drive east along Cascade River Road for ~22.5 miles until reaching a large parking area at the end of the road. This is the location of the Cascade Pass Trailhead (3660' elevation), the major starting location for most standard routes of Buckner Mountain. 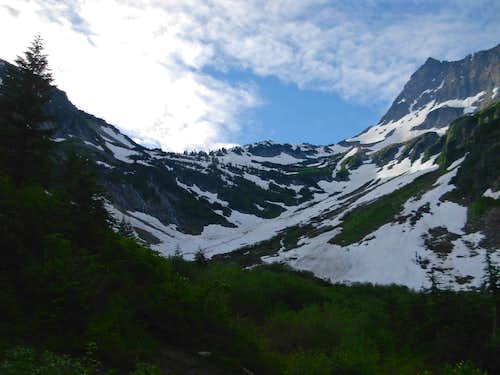 WILDERNESS INFORMATION CENTER:
TELEPHONE: 360-854-7245
LOCATION: One mile down Ranger Station Road, which is a road that intersects Highway 20 at Milepost 105.3 on the west side of Marblemount, WA.

Access to the area is for hikers only. No pets, horses, bicycles, or motorized vehicles are allowed in the area.

Bear canisters are highly recommended for any party camping overnight at Sahale Glacier Camp or in Horseshoe Basin.

Camping is not permitted on Sahale Arm, due to fragile plant species located on that ridge and the amount of people visiting the area.

Campfires are not allowed at any of the backcountry campsites within North Cascades National Park.

The optimum climbing timeframe for Buckner Mountain is from July-September, after avalanche danger has passed. Despite being considered one of the most technically-demanding CoHPs in Washington as well as the lower 48 States, of Washington peaks that have over 9000' elevation Buckner Mountain is considered one of the least technical to summit. However, alpine skills such as ice axe usage, glacier travel, self arrest, and scrambling are still minimum requirements for attempting to summit this mountain. 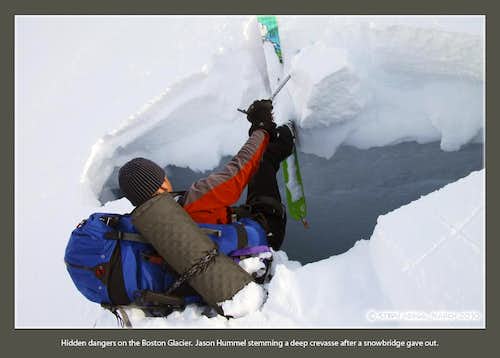 NOTE: If planning to traverse to the northeast peak of Buckner Mountain, it is best recommended to wait until late season (late Summer/early Autumn) when no snow or cornices block safe scrambling routes for that peak. 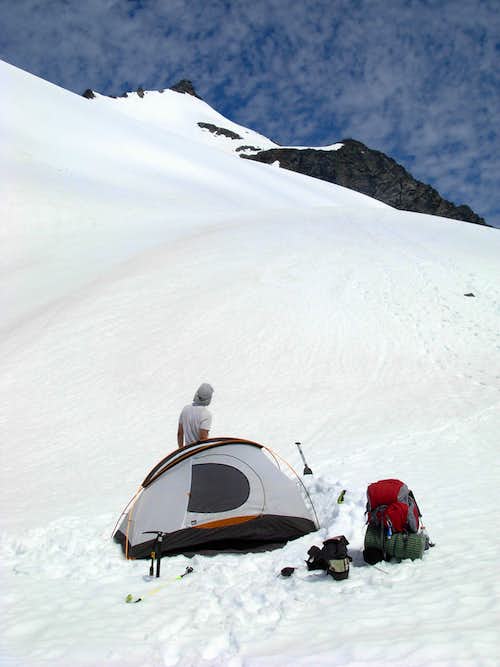 The Boston Basin area has two camping sites, one at ~5000' elevation and another at ~6000' elevation. Both sites have compost toilets. The Sahale Boston col is an alternative for a bivy site - and in good weather has excellent views. A bivy can also done at the base of a North Face climb of Buckner Mountain.

Bear canisters are highly recommended for any party camping overnight at Sahale Glacier Camp or in Horseshoe Basin.

Campfires are not allowed at any of the backcountry campsites within North Cascades National Park.

This could be done in a long day by a strong party going in via Cascade Pass/Sahale Arm. This eliminates the need for an overnight permit, which can be hard to come by given the current restrictions.