Colfax Peak is a subsiduary peak of Mount Baker, but despite this it has about 400 feet of prominence and is offset from the main crater rim making it a worthy objective. It's is part of a series of peaks called the "Black Buttes" which extend down the west shoulder of Mount Baker, and includes Lincoln Peak and Assasin Spire. Colfax Peak itself can fairly easily be ascended from the saddle separating it from the summit of Baker via the standard Coleman Glacier Route, however in recent years, difficult ice climbing routes have been put up on its very rugged north face.

For anyone looking to climb this peak, a working knowledge of safe glacier travel skills and crevasse rescue is a must. It's also a popular place for skiers to visit in the spring when sufficient snow cover makes for great skiing and less crevasses. Still, it's a good idea to utilize roping up especially in late spring when they begin opening up.

Getting There - Glacier Creek Road

From Seattle: Take I-5 for about 60 miles until you get to Mount Vernon, take a right at exit 230 onto Highway 20. After about .2 miles be sure to take a left onto S Burlington Blvd (this goes North). After .4 miles take a right back onto highway 20 (at this part of town it is known as Avon Ave). In 5.1 miles take a left onto Highway 9 heading North. In 22.2 miles take a right at a fork in the road and take a right onto highway 542 (Mount Baker Highway). In 8.3 miles turn right (staying on Highway 542) in the city of Kendall. 11.5 miles further down the road is the city of Glacier where you take a right onto Glacier Creek Road (NF Road 39). Follow this service road for 7.8 miles which the Heliotrope trailhead will be on your left. The road itself keeps on going which you ought not to proceed beyond the trailhead.

The road is usually snow covered in early season making it a longer approach (usually around 3-5 miles). Many decide on bringing ski's to make traveling faster. By late April the road typically clears.

Ascend as per the standard Coleman Glacier Route on Mount Baker by hiking up the Heliotrope Ridge Trail. After passing Kulshan Creek, the trail curves left and wraps around a small ridge. After the second waterfall you arrive at a fork in the trail. The left path goes to the Glacier Overlook, the right path is a climbers trail that takes you to the Coleman Glacier...take the right fork! Shortly after the fork the route breaks out of the trees where you start to see views of Baker and the Coleman seracs. Roughly around 6,000 feet you encounter the beginning of the glacier. Through out much of the year it's hard to tell exactly where the glacier starts. Rope up as soon as the snow slope steepens. At the edge of the glacier aim slightly east of point 7242 (Heliotrope Ridge). From Heliotrope Ridge head almost directly east for a while and eventually curve southward depending on how crevasses effect the route. Eventually you arrive at the saddle between the summit and Colfax Peak.

From this saddle, instead of heading left for the summit of Mount Baker, head right and ascend the ridge towards Point 9,355. Go around the south side of this point, passing just below its summit and drop to the next saddle. Carefully traverse across this crevasse ridden saddle and ascend the final steep slope (45 degree snow) to the summit area of Colfax Peak. The highest point is directly above the north face so watch out for cornices.

The north face of Colfax Peak offers some excellent alpine ice climbing with routes varying in difficulty from WI-4 to WI-6. Listed below are a few of the known routes that have been completed.

Cosley-Houston - WI4 - 600' - 4 Pitches - This is the easiest route up the face and starts just above the bergschrund with a low-angle ice ramp up to the base of the crux pillar. The pillar is short and steep, with about 30 feet of ice before hitting a steep snow gully trending up and right. The ramp heads directly to another pitch of ice, this one shorter at about 20 feet and more of a curtain. It's possible to climb this in many different ways. Above the curtain, follow the gully system up and right to a tighter exit gully which brings you to the summit. Descend the standard ascent route described above.

Polish Route - WI6 - 1000' - 4 Pitches - This is probably the best route on the face, as it's a perfect line of ice going directly up the middle of the North Face of Colfax Peak. It's an unmistakable ice line, cutting straight up and can't be missed. Portions of thin ice with a WI6 crux make this a beautiful route for the strong ice climbers.

ee this great blog entry by Colin Haley about his ascent of the Polish Route - I happened to just be climbing up the standard route on Colfax Peak when Colin was climbing the Polish Route, and I snapped a couple photos of him.

You can crash in or near your car at the trailhead, and there are a few designated camping spots along the Heliotrope Ridge Trail. Higher up you can camp anywhere you desire on snow. There are no permits or fees to climb. Colfax Peak lies within the Mount Baker Wilderness, which is outside of North Cascades National Park. 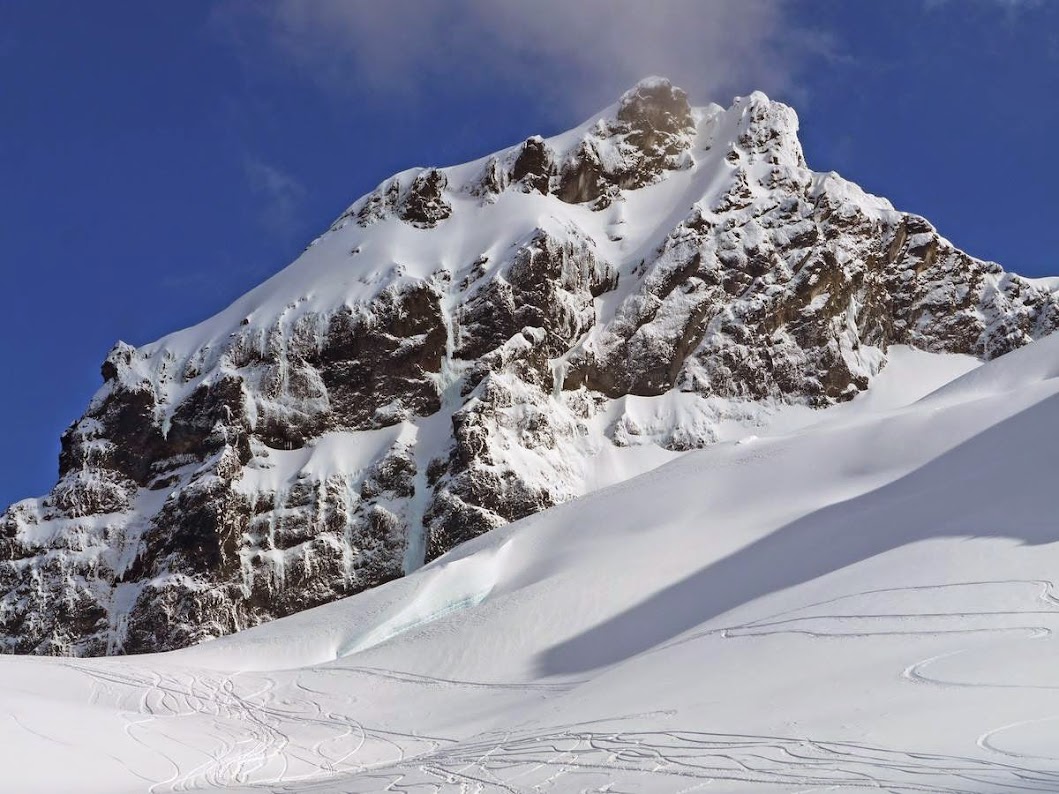 Colfax Peak can be climbed any time of year, just as Mount Baker, although keep in mind the Glacier Creek Road is not plowed and snow cover will significantly increase the distance if you must walk the road. Winter ascents can be very windy and cold, so plan accordingly. Skis and/or snowshoes will likely be mandatory. 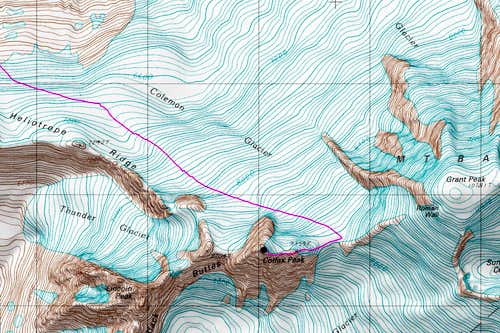