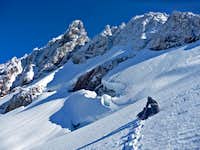 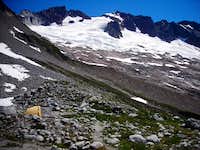 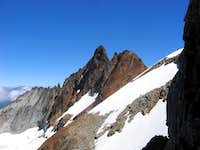 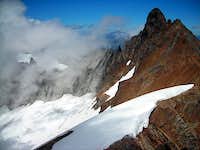 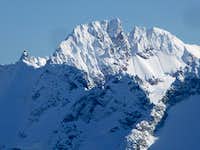 The first ascentionist of Boston Peak stated that it was nothing but “a heap of low-grade ore.” At 8,894 feet it commands a regal location above Boston Basin with excellent views of Mount Logan, Mount Buckner, the Boston Glacier, Mount Goode, Sahale Peak, Glacier Peak, Sharkfin Tower, Forbidden Peak and Eldorado. A climb of Boston Peak can be either very rewarding and beautiful, or a nightmare worthy of an epic tale of survival. Boston Peak has a big reputation for being loose, dangerous and very exposed. Add to that the easiest route is 4th class and you have a peak that demands respect from all who venture onto it. If you fail to respect this mountain, disastrous consequences may result. Approach Boston Peak with a plethora of mountaineering experience and care. There has been a fair share of fatalities on this peak. 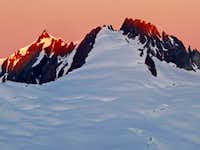 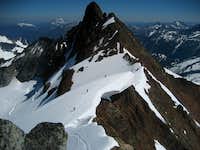 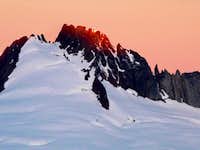 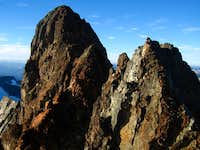 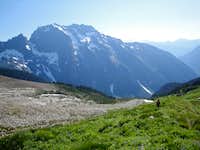 The two primary trailheads for Boston Peak are the Boston Basin Trailhead or the Cascade Pass trailhead. Both are reached via the Cascade River Road. From Interstate 5 in Burlington take WA 20 (North Cascades Highway) towards Sedro Wooley. Drive 47 miles to Marblemount and drive through the small but quaint little town. Right after you pass the Chevron Station where the highway makes a sharp right turn, bear to the right onto the signed Cascade River Road. This road crosses the Sauk River right away and continues east towards the high peaks. Take this good paved and gravel road for 22 miles to a turnout on the left (elevation 3,200 feet) beneath the impressive Northeast Face of Johannesburg Mountain. This is the Boston Basin trailhead and there is room for about 6-8 cars here. Continue another mile up to the roads end for the Cascade Pass trailhead where there is a bathroom facility, a designated campsite and plenty of parking.

Begin on the trail that starts heading west. It gains little elevation over the first mile as it follows an old mining track. As the trail continues traversing west it steepens and you will get to a short (maybe 200 foot) section of very steep trail. Above this the trail continues traversing west through open bushes and deadfall from a large slide back in the spring of 2002. You will cross 4 streams in this area however the trail is easily recognizable. Past the avalanche swath area, continue through forest switchbacking up towards Boston Basin.

Right after the trees open up, there is a large creek crossing from the water draining down the Quien Sabe Glacier. Cross this creek (may need to wade) and continue traversing west until the trail hits a grassy rib and follows it to the designated campsites in Boston Basin at 6,400 feet in elevation. These sites are situated on a small sandy flat at the base of a permanent snowfield with a nearby privy and food storage bin however they remain snow covered until at least July. This makes a good basecamp for a climb of Boston Peak Sahale Peak, Forbidden Peak or Torment Peak as well as Sharkfin Tower.

Although this is a great place to camp, it might be better to leave the trail at the stream crossing just after the trees open up and climb up on slabs and talus to the base of the Quien Sabe glacier where you can bivy which is much closer to Boston Peak. The hike up Boston Basin is becoming more popular and permits for an overnight are becoming harder to get especially on weekends.

From camp or bivy in Boston Basin, hike on open rock or snow to the base of the Quien Sabe Glacier. Much of the terrain here is smooth low-angle slabs, loose talus and grass. Once on the glacier, rope up and climb the moderate glacier to the Boston/Sahale saddle where there is a great bivy site just large enough for a small, 2 person tent.

Use the Cascade Pass trailhead for this approach and hike the 4.2 easy miles of well maintained trail to the 5,400 foot Cascade Pass. At the patio, head left and take the trail up Sahale Arm reaching the high camps at 7,800 feet. The trail is easy to follow but is steep in places. Once it reaches the arm, it actually mellows out a little. Just beyond the high camps (which are allmost impossible to get a permit for), reach the Sahale Glacier and rope up. Climb the glacier by doing an ascending traverse for the rocky ridge on its far side and climb Sahale Peak. See this page for more information about the route to Sahale Peak. From Sahale, you have a commanding view of the traverse to Boston Peak. Nearly the entire traverse is visible. Begin by descending down some slabs just below Sahale's summit and making the easy walk to the same saddle described above.

Authors note about the route The standard route on Boston Peak is known for being a messy, chossy piece of crap but in reality, it isn't as bad as it's said to be. Many experienced climbers who have had lots of experience on loose terrain and class 4-5 climbing have noted the climb to actually be pretty friendly. I for sure thought is wasn't so bad, certainly better than some of the loose crap I've been on in Colorado. That being said, make sure you are comfortable with class 4 terrain before even thinking about climbing this peak. The one nice thing about this peak is that there are ledges...and many of them. Many of the ledges are great to stand on and rest and/or think about your next move. Some of these ledges have some pebble scree on them which is why the mountain has a reputation for being loose. From my experience on the mountain though, these scree areas were avoidable. I never had problems of large blocks (ie. Handholds) breaking loose either. The route doesn't even have to be down-climbed. Leave rock pro at home but bring a 60 meter rope and harnesses for the rappels. I certainly wouldn't want to down-climb the route. As always, wear a helmet!

From the Boston/Sahale saddle, begin climbing up the ridge towards Boston Peak. Where the ridge steepens, climb the ridge crest up a steep pitch (Class 3) to where the ridge flattens and becomes a knife edge. Continue as close to the crest as you can and never stray to far down on either side as this will bring you onto much looser and more dangerous terrain. The exposure on this part of the ridge is amazing. When you get close to the main tower in the ridge between the saddle and Boston Peak, don't climb it! Look for a small cairn and begin traversing right around its east side by dropping off the crest onto a ledge and around a rib where you will then see the very top of the Boston Glacier.

Descend to the snow and walk along the glaciers edge above the large schrund until reaching a large ledge at the very base of Boston Peak right where the snow ends. There will likely be a moat here but it shouldn't pose any problems. Once on the large ledge, climb straight up loose blocky terrain above it for 20 feet to a second ledge. This ledge is smaller than the lower one but is still easily recognized. Turn right and follow this ledge to its end. Upon reaching the end, begin climbing up the face above you "following the natural line of the mountain". Weave back and forth climbing up one small ledge after another. The exposure increases as you climb but you can keep the climbing at very exposed Class 3 until about 50 feet below the summit where one or two class 4 moves are required. Either climb a small 10 foot chimney or the rib just to the climbers right. This is the crux. J

ust past this the climbing eases again and you abruptly reach the summit ridge where a short walk along a narrow exposed ridge takes you to the highest point where you will find the best summit register ever. A 1961 Mazama Mountaineering box with a large book inside marks the summit. About 5-10 parties register ascents each year with some years being much less. When I was there in August 2012, we summitted at around 6:00 PM on a beautiful afternoon with a sea of clouds below us to the west with a gorgeous evening sun. Eldorado and Forbidden Peaks poked above the cloud layer. To the east we saw as far as the eye can see. Glacier Peak, Bonanza Peak and all of North Cascades National Park was visible.

Once you have had your fill, walk down off the summit towards Sahale Peak a few feet to the first rappel sling. Three 25 meter rappels take you to the snow below where you can then reverse the route back to the Sahale/Boston saddle. Each of the three anchors were all bomb proof!

A very small rack may be helpful but I wouldn't recommend using one as this will just increase your time on the east face and rope drag could knock rocks loose. Just get comfortable with this type of climbing and commit to one single push up the face without any protection. 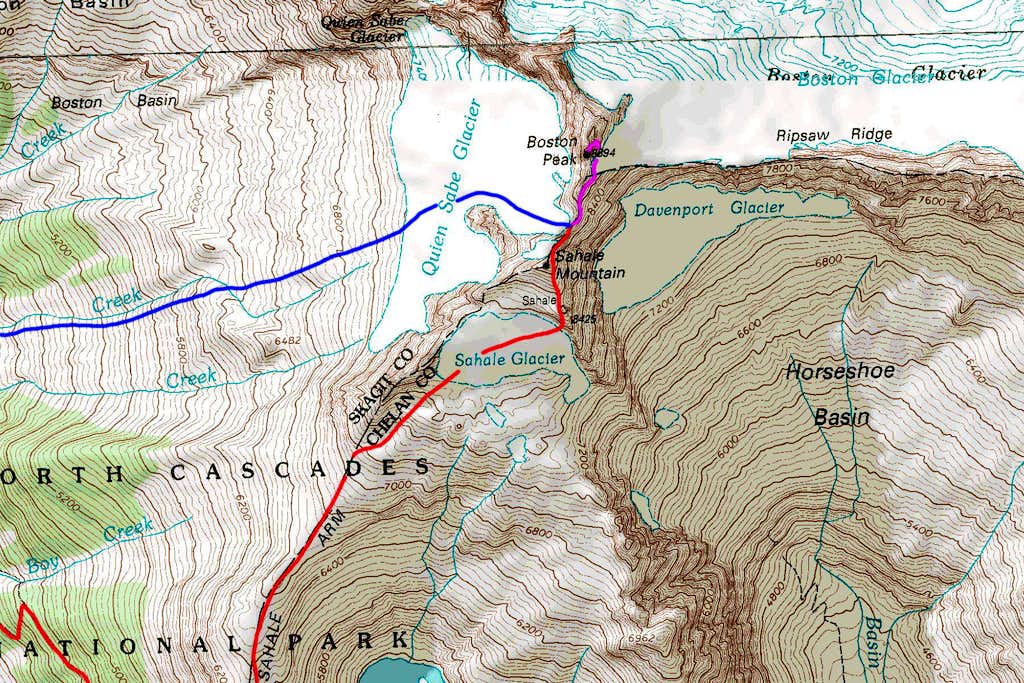 There is no fee to park at the trailheads or enter the national park. Camping is permitted without a permit or a fee along the Cascade River Road. Permits are required for overnight trips in the North Cascades National Park. For information call the National Park Service Ranger Station for the North Cascades National Park in Marblemount (360)873-4500 or visit the ranger station there by driving down Ranger Station Road for 1 mile off Highway 20 just outside Marblemount.

You can find great camping in Boston Basin at the designated sites or high on Sahale Arm at the designated sites there. Since this area is within the North Cascades National Park, please camp in designated sites unless you bivy up high. Permits are required for camping in the national park which are free and can be accessed from the ranger station in Marblemount. These sites all have flowing water nearby. A nice bivy site is located at the Boston/Sahale saddle however you'll have to melt water here. Please DO NOT camp at Cascade Pass. This is the one place you will not get away with camping illegally. 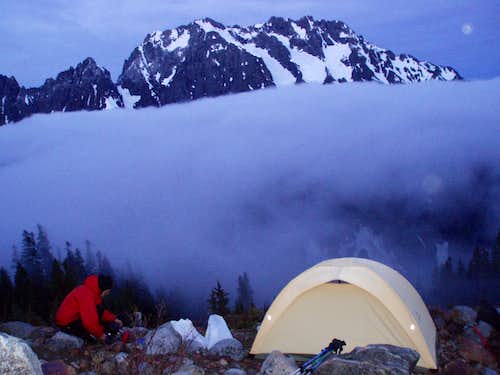 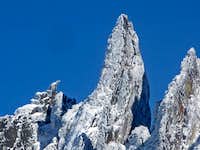