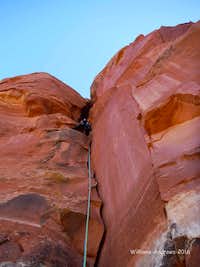 Dow leading the 2nd pitch
My favorite climb to combine with the Mace is a route named the Dodger located behind the Mace in a narrow slot in the South Mesa. However the quality of rock and off-width nature of the Dodger would not lend itself to many who are seeking out the Mace as a climb they could or want to lead. After about my 6th trip on the Mace I found a route on the North Mesa which is very much in line difficulty wise with the Mace. The Hurricane is located at the very west end of the North Mesa, southwest tip to be exact and thus receives afternoon sun. Burcham established the route in 1999. 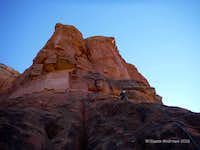 1st Pitch
Hurricane is a three pitch route and is easily accessible to the Mace or any other Cathedral route for that matter. The first pitch is a fun and easy face climb to a short exciting corner through the limestone band. The second pitch is outstanding by Sedona tower standards. It starts out as a perfect hand corner and then adds some chimney and a short bit of off-width (crux) before spitting you out onto a comfortable belay ledge (shoulder). The third pitch is just 5th class to the summit.

From the hike up to Cathedral, turn right on a climbers trail just before reaching the col that hikers congregate at for the views. Circumvent the North Mesa, east to west, along its north face. Continue on the trail as it turns left to the west end. Do not attempt to circumvent right below the north face as brush will deter you (or even ice in February). At the west end, the separate corners that make up the Hurricane and Cobra Vision (5.12b) are easy to locate via the beta photo. The bolted start is below and to the left of the main corner for the Hurricane.

1st Pitch- 100’- 5.9/ You can only see one or two bolts from directly below the route but there are five clips as the Bloom guide suggests. Follow the bolts up crumbling sandstone slab. The first move up and onto the limestone band is the crux of the first pitch (one or two off-balance moves). You can place a medium piece to protect the relatively easy ground from atop the limestone band to a ledge with a fixed anchor.

2nd Pitch- 150’- 5.10a/ A surprisingly good pitch. Take the nice hand crack corner (40’) up to the base of the main chimney. Chimney up facing right and clip two bolts on the right wall. Mantel up blocks to the base of the short left-facing off-width (C4#4) which is the crux of the climb. Climb the off-width (25’) corner and move back into the chimney at the top. Pass a fixed station to a more comfortable medium gear belay atop the chimney.

3rd Pitch- 50’- 5th/ Move up and right on a short off-width crack. Mantel it and scramble up to a fixed rap. Un-rope to walk up to the broad summit.

Single rope rap from the fixed anchor near the summit gets you back down to the top of the chimney. Move right along a ledge to locate Fat Bastard’s double rope rap anchor. Make a double rope rap to the ground, down the intimidating Fat bastard off-width corner.

I found a recommendation on-line to bring triple C4#3’s, a #4 and a #5. You are best served with a single rack to #4. I never used a #3 or #5 and walked #4 one time up the short off-width section on the second pitch. Double ropes for the rap. The route faces NW and in Feb gets good shade most of the day. I placed no wires. Half dozen draws, half dozen slings.