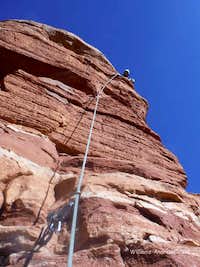 2nd Pitch
Sipapu and T Rex make for a good combo with a short approach starting right out of west Sedona proper. They see one ascent to every 500 that nearby Dr. Rubo’s Wild Ride sees. Therefore, don’t go looking for stellar sandstone on either route, in fact T Rex is downright chossy. But they are both adventurous and fun climbs that share the exact same approach. Bloom has both listed in the Dry Creek Spire section of his guide, but in reality they are located out of west Sedona between the iconic Coffee Pot Rock and Chimney Rock. Those two features are two of the more popular landmarks in Sedona. T Rex would be as well known if it stood further from the wall (because it really looks like a T Rex), but it blends into Capitol Butte which is a large sandstone wall that Sipapu climbs. Sipapu climbs the south face of Capitol Butte for three pitches. The col between T Rex and Capitol Butte is approximately 100’. T Rex’s route starts on its north face before circumventing to the south. Therefore both starts are basically at the same location. The route was established in the 80's. 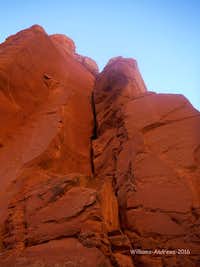 1st Pitch
T Rex has two pitches. Bloom's guide contradicts itself regarding the first pitch. Topo shows one thing, text description another. In any regard the most aesthetic line is to climb the nice looking left facing corner on the north face via hands. Below precariously stacked boulders which are below the limestone band, traverse right onto a hanging ledge and continue to traverse right to another ledge on the south side of the tower. Bloom's topo shows a fixed station here but there is none, just old tat around a large boulder. The same boulder you can sling for the belay. The second pitch ascends the limestone via a small corner that takes solid medium gear. There are several more decent small gear pods before reaching two pitons leading to the summit (crux moves of the climb are through the pitons). We did not feel the "R" rating Bloom gives it. The sandstone is chossy but our pro was not run out.

Bloom’s guide references parking along Skyview in a neighborhood. If you did this, it no doubt would be a violation. You would be blocking signage, etc. Just use the trail head at the end of Andante (head north on Andante at Circle K (2016) off of 89A in west Sedona). Hike east on an established trail hooking into a wide trail that heads straight north at the turn in Skyview. Follow this trail, turning right for a short section, aiming for an obvious large boulder. From here, hike up the hill to the col between T Rex (quite obvious) and Capitol Butte, there is not much of a climbers trail. Just work your way up to the col. It is easy to locate the bolts for Sipapu. T Rex’s route starts in the obvious left facing corner right up from the col. The T Rex description and topo in Blooms book is not consistent on this, but that is the most aesthetic way to start T Rex.

1st Pitch- 75’- 5.9/Bloom’s guide is all over the place on this first pitch. In text they mention climbing a crack on the north wall of T-Rex. On their topo they show you going up a chimney on the south face. There is even a third option in the middle, the harder but probably better pitch of the three, a hand crack that widens through a roof at the top but you would need wide gear to protect it.  The hand crack on the north face goes easier than 5.9 in my opinion. The chimney on the south face would go even easier yet, but is quite chossy and uninviting. The north face crack is the way to go or bring your off-width gear for the middle option.  Start up the hand crack corner on the north face. I placed one C4#2 and #3. When you get to the stacked blocks below the limestone band above, traverse right onto a small hanging ledge. Continue traversing right to a large limestone slung boulder belay (no fixed rap as the topo in Bloom’s guide would suggest, this boulder has been slung for a rap previously).

2nd Pitch- 50’- 5.10-/ Climb the obvious limestone crack up and right. Bloom’s guide suggests just taking a #2 and #3 on the 2nd pitch. In reality, sizes C4#.3 to .5 can fit in opportunistic places: one of which is at a committing move off a ledge below clipping the first of two pitons (2016) on the upper south face of T-Rex. Steep climbing on suspect rock gets you to the upper piton in short order. The crux of the route is the final mantel up the steep face right above the 2nd piton. The rock is white and crumbly making it a bit more exciting than normal. Slide right to clip the rap anchor. The #3 fits in a pocket at the start of the limestone corner/crack. Another medium piece can protect the mantling out of this corner. We pulled a significant limestone piece off of this section.

A single 70m rope makes it from the summit (fixed station) to the ground no worries.

70m rope. Single set to C4#3. A #.4 and #.5 seemed to be the most rewarding placements, located between the limestone band and the first piton. The first belay and 2nd pitch are south facing, dress accordingly.