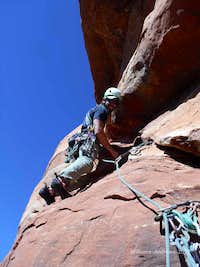 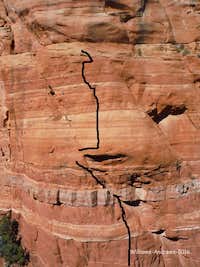 Topo
Sipapu and T Rex make for a good combo with a short approach starting right out of west Sedona proper. They see one ascent to every 500 that nearby Dr. Rubo’s Wild Ride sees.  Therefore, don’t go looking for stellar sandstone on either route, in fact T Rex is downright chossy. But they are both adventurous and fun climbs that share the exact same approach. Bloom has both listed in the Dry Creek section of his guide, but in reality they are located out of west Sedona between the iconic Coffee Pot Rock and Chimney Rock. Those two features are two of the more popular landmarks in Sedona. T Rex would be as well known if it stood further from the wall (because it really looks like a T Rex), but it blends into Capitol Butte which is a large sandstone wall that Sipapu climbs. Sipapu climbs the south face of Capitol Butte for three pitches. The col between T Rex and Capitol Butte is approximately 100’ . T Rex’s route starts on its north face before circumventing to the south. Therefore both starts are basically at the same location.

The term sipapu is the equivalent to hueco and there are two of them on the guide's topo, one on the 1st pitch and one near the end of the 3rd pitch, neither are that critical to the climb. The route was established in 2006. 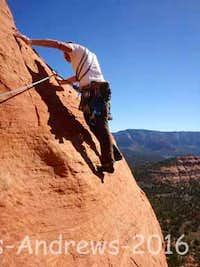 3rd Pitch
Sipapu has three pitches, but the middle one is very short. It does make sense to break them up as the FAer has them regarding rope drag. The first pitch is pretty mellow bolt to bolt climbing on easy sandstone slab. When you reach the limestone band, you could place a piece or two but the climbing is quite juggy. I did not place any gear on the 1st or 3rd pitches. The 2nd pitch has the crux move, albeit short, of the climb.  A left leaning corner that requires a committing height dependent exit to a jug. I found the move full on for the grade. The third pitch offers the most sustained climbing. Several 5.10 technical slab moves are required early on the pitch making your way up the slab. It is well bolted through those moves.  The last traverse move right to clip a bolt and mantel a small roof is quite committing on chossy rock.

Bloom’s guide references parking along Skyview in a neighborhood. If you did this, it no doubt would be a violation. You would be blocking signage, etc. Just use the trail head at the end of Andante (head north on Andante at Circle K (2016) off of 89A in west Sedona). Hike east on an established trail hooking into a wide trail that heads straight north at the turn in Skyview. Follow this trail, turning right for a short section, aiming for an obvious large boulder. From here, hike up the hill to the col between T Rex (quite obvious) and Capitol Butte, there is not much of a climbers trail. Just work your way up to the col. It is easy to locate the bolts for Sipapu. T Rex’s route starts in the obvious left facing corner right up from the col. The T Rex description and topo in Blooms book is not consistent on this, but that is the most aesthetic way to start T Rex.

1st Pitch- 90’- 5.7/ Approximately five bolts protect the pitch with no need for gear. Follow the bolts up to the limestone band which has jugs to the top and a fixed anchor.

2nd Pitch- 25’- 5.10-/ This is one of the shorter pitches in all of Sedona but contains the crux move of the route, an off-balanced left leaning corner. Most of it is closed, thus two bolts protect up the left face. You can place a C4#.75 before you clip the first bolt, but that is not the crux section. The crux is after clipping the second bolt, a must do sequence of lay backing and reaching high for a jug, still lay backing off the jug until you push onto the belay ledge, fixed anchor.

3rd Pitch- 90’- 5.10-/ Bloom’s guide calls this a well bolted but committing pitch.  What he means is that the moves are committing with feeling of exposure from bolt to bolt at several spots. It is not run out and no gear is necessary. There are seven bolts as of 2016. Traverse right from the belay and clip the first bolt. Make a techy and cruxy mantle to the next bolt. Repeat (past a hueco) which lands you into a short shallow closed corner that goes easier for a few meters. When you reach another large sized hueco, you must traverse right over airy ground and white suspect rock to make your final clip which protects the final mantel. Mantling technique is the key to this final pitch.

Two raps make it to the ground. We had a 70m but a 60m will handle it if you use good judgement.

The only gear we placed was a C4#1 and/or #.75 on the second pitch. The crux exit move is well protected by a bolt. This is a south facing route, dress accordingly. The 3rd pitch is chossy enough to recommend helmets.