Iceberg Notch is a prominent feature along the Ptarmigan Wall above Iceberg Lake, one of the most popular hiking destinations in Glacier National Park. Many see it. Fewer pay much attention to it. Even fewer climb it. Too bad. Actually, it's not too bad. It's great. Iceberg Notch is a fun climb that is easier than it looks (that doesn't necessarily mean it's easy) and serves up spectacular views of both some of the most familiar and the wildest terrain in the park. Some of the highlights are looking down on the people far below along the lakeshore, looking across the iceberg-studded lake and up to Mount Wilbur, and gazing west and northwest at the glaciers and ridges of Ipasha Peak and Mount Merritt. Iceberg Notch is not an actual mountain, but it is, as J. Gordon Edwards's A Climber's Guide to Glacier National Park treats it, a climbing destination unto itself. Many a mountaineer would be satisfied with simply climbing the Notch, taking in the scenery, and calling it a day at that. But Iceberg Notch is also a gateway to other destinations-- --Iceberg Peak. --Ahern Pass, Ahern Peak, and Ipasha Peak. --The goat trail that hugs the west side of the Ptarmigan Wall between Ahern Pass and Ptarmigan Tunnel. --B-7 Pillar, a technical spire close by on the Ptarmigan Wall. So Iceberg Notch is in the odd position of being both a destination and a route, hence my creating a mountain/rock page for it while also attaching it as a child to the Iceberg Peak page. Another deciding factor for this decision is that Edwards includes Iceberg Notch among the peak descriptions instead of including it in the "Routes Among the Peaks" section. 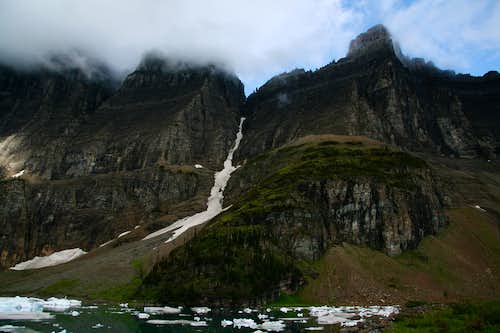 From Babb, drive west into Many Glacier Valley in Glacier National Park. Follow the road to its end at the Swiftcurrent Motor Inn and follow signs to the Iceberg/Ptarmigan trailhead. 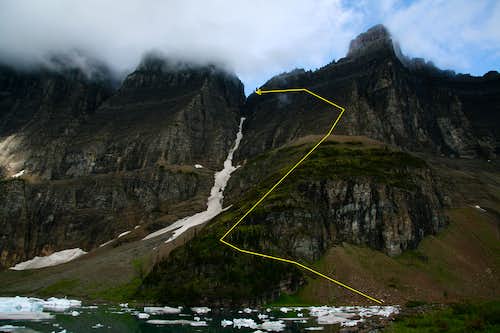 First, let's deal with the elevation discrepancy between the Edwards guide and the USGS maps. Edwards gives the elevation of the notch as 7700'. He mentions the discrepancy with the newer maps, noting that they suggest the notch is closer to 8400', and then he in so many words dismisses it and implies that his number is the right one. Edwards was an accomplished climber, but he was wrong about the discrepancy. My GPS device gave me a reading of 8136'; a close look at the topo maps suggests that Iceberg Notch is a little more than 8120'. 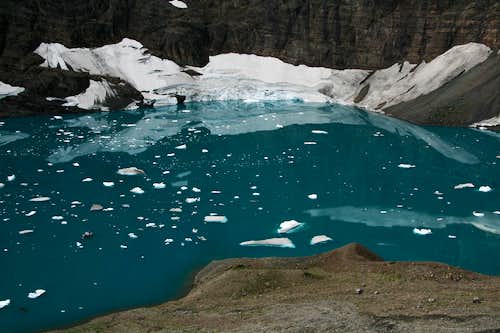 First, hike to Iceberg Lake. Depending on your source, you will read that the distance is anywhere from 4.5-5 miles. Trailhead signs call it 4.9. Elevation gain to the lake is about 1100'. Edwards mentions two ways of approaching Iceberg Notch. The first is to follow Iceberg Creek's north side at the bridged crossing shortly before Iceberg Lake and then gain slopes and ramps to the base of the cliffs above. The problem with this is that the route has a lot of trees and brush in places and in other parts crosses alpine meadows which are closed to human usage. The second approach is via the ridge on the north side of the lake. Follow a use trail along the lakeshore, cross the lake's outlet, and then gain the scree- and brush-covered ridge. The ridge is Class 2 going but can be slippery. This part of the climb is tiring, but after it's over, you can look forward to mostly Class 3 going on pretty decent rock. Above the brush, the ridge becomes just a scree slog to the base of the cliffs. Now the good stuff is waiting. If you have read the Edwards guide, you can be forgiven for thinking the route sounds complicated, as he mentions various cliffs, ramps, couloirs, outcrops, and trees. In reality, the route is much less complicated than it sounds, and one does not need to worry about following the description exactly lest he end up at the edge of the abyss. In fact, there are really just two very useful things in the description-- a good route diagram and the mention of a gray rock that has a white marking resembling an upside-down "F." Basically, you want to work your way to and above the "F" to reach a high goat trail that finishes the climb. The "F" is difficult to see from Iceberg Lake, but it is easy to see from the base of the cliffs you reach after the Class 2 approach. It is also easy to see a diagonal ramp leading to the "F" from the right. So here is the short of it-- scramble up the cliffs and ledges after spotting the ramp and the "F," trending right and up to the lower end of the long ramp. Then follow the ramp to the "F," climb a short Class 4 gully a few feet left of it, and scramble up some more until you find a goat trail or a series of ledges that will lead the last few hundred vertical feet to Iceberg Notch, which is guarded by a series of rotten-looking pinnacles, some of which look like nice scrambles. Don't worry if you find yourself off the exact route; there are many other Class 3 and 4 ways to get up, as I learned firsthand (and willingly). Just keep the "F" as a landmark and stay away from the deep couloir that leads directly to the notch. The distance from Iceberg Lake up to Iceberg Notch via this route is a little over a mile, and the elevation gain is about 2000'. Once you reach the cliffs, the going is mostly Class 3, but you may find yourself doing an occasional Class 4 move. The rock is better than it looks, but it is still loose in many places and must always be tested. Exposure is not, in my opinion, significant, but remember that perception of exposure is highly subjective. Here is a video from a climb of Iceberg Notch, supplied by SP member jimegan.

Iceberg Peak-- I have not climbed Iceberg Peak from Iceberg Notch, but the route is easy to see (easier than it is to see from Ahern Pass below). Do not attempt to traverse the ridge to Iceberg Peak; if you do, you will most likely either die or give up. Instead, descend until you are about level with two cliff bands below the crest of the Ptarmigan Wall. Work your through or around these cliffs, and then follow scree slopes to the summit. Ahern Pass-- Ahern Pass is about 1000' below Iceberg Notch and is maybe a half-mile of steep hiking away. From the pass, follow the ridge north 2 miles to Ahern Peak (or, if you are camping here or just love pain, take on the grueling traverse from Ahern Peak to Ipasha Peak) or descend from the pass to the south end of the awesome goat trail that runs for about four miles to Ptarmigan Tunnel. B-7 Pillar-- It is an easy hike across scree slopes north from the notch to the base of this pillar. Nothing is easy after that.

View from the notch 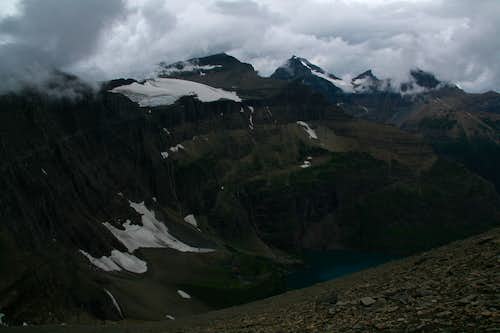 View from the notch

It costs $25 to enter Glacier National Park, and that buys a week of access. Annual and Interagency Passes are available for those who would make good use of them. This is bear country, and the trail passes through prime grizzly habitat. In fact, there are more bear sightings on the Iceberg Lake Trail than on any other trail in the park. Know what to do and how to behave around these magnificent but unpredictable and dangerous animals.

There is a campground at the end of the road. It has toilets and water and is within walking distance of a store and restaurant. Reservations are not accepted. The campground usually fills on summer days, so plan to arrive early. There is no backcountry camping allowed at or along the way to Iceberg Lake. Swiftcurrent Motor Inn has cabins and motel rooms at fairly reasonable rates. A mile away, the famous Many Glacier Hotel has more rooms, more dining options, and a community atmosphere, but it is also a good deal more expensive.