Thanks to the history of climbs on Klek and easy accessibility, this mountain is very often considered to be the craddle and symbol of mountainering and alpinism in Croatia. And its silouethe, together with edelweiss flower, could be seen on Croatian Mountaineering Association´s official insignia.

Klek is a part of Velika Kapela GROUP (masiff) in western Croatia, and also the group´s easternmost mountain.
When coming from direction of Panonic plain and from Zagreb this is one of the first of higher mountains you reach in this part of Dinaric Alps, and impression is even strenghtened thanks to Klek´s very recognizable shape – a huge rocky summit that overtops its woodeed base and surrounding wooded summits.

Its elongated rocky ridge is around 3 kms long and stretches in northwest-southeast direction. The most famous features of Klek´s main ridge are 200 m high south-eastern rock (just under Klek´s main summit), somewhat smaller western one and finally Klecice (read Klechice - Klechica is a deminutive from the word Klek) - two stony steeps north of Klek´s summit. 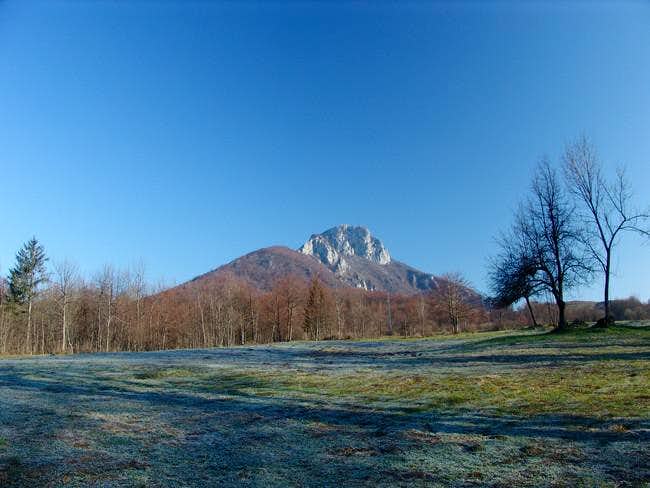 Despite the first impression of Klek area - and that is abundance of vegetation - Klek and surrounding areas have also some typical carst relief features (carstic caves, holes, carstic-type fields (ponikve) and underground waterflows and streams). Touristically attractive are also some nice grassy meadows like Bjelsko, Kneja and Ravni jarak.

The mountain itself is covered with woods up to its ridge. Along central part of ridge and atop main Klek´s rocks there are some small plateau-like meadows. The mountain has interesting variety of plants, thus making it botanically attractive.

Klek is easy accessible, within conveniet public transport and walks taking from 1 up to 4 hours, to get to its summits from the foot of the mountain. Thus, the mountain is frequently visited - you will most of the times meet people here, especcially on weekends. At its base, the mountain can be approached by paved roads from almost three sides (out of four, of course!).

The mountan´s rocks are alpinistically interesting and very popular, but yet a dozen of fatalities already happened here (thus the rock of Klek holds the first place on this „black list“ of all the mountains in Croatia).

According to a legend Klek is a meeting place of witches, which became also symbol of the mountain itself as a nearby town of Ogulin.

From the summit of Klek major mountains in Velika Kapela group can be seen (especially nice views on Bjelolasica and Bijele and Samarske stijene (rocks). Further away Velebit and other Lika-region mountains can be seen (Licka Pljesivica), as well as some mountains in Western Bosnia&Herzegovina, the Alps and other mountains in Slovenia and other summits and hills of Peri-Panonic area, including Medvednica mountain above Zagreb.

You can also approach Klek by other trails that exist in the area like those from direction of Jasenak (connecting trails with Bjelolasica, Bijele and Samarske stijene and other