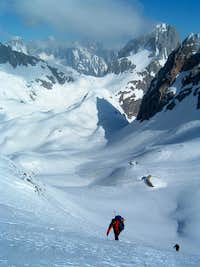 Approximately halfway between Vienna (Austria) and Athens (Greece) broad, 55 miles long mountain range stretches in NW-SE direction, from the Scutari lake (Europe's largest cryptodepression) till the Mokra Gora mountain at the edge of Kosovo polje field,  2/3 of the range still situated inside Albania.

Name of the mountain range is Bjeshkët e Nemuna.

Maja Jezerce is the highest peak of Bjeshkët e Nemuna.  A ruggy,  grey-azure coloured limestone mountain topping the Lugu Grads snow filled hollow,  only 4 miles from the Albania/Montenegro border.  Climbed by not many so far, albeit the esiest routes are not hard at all.  The story behind this summit is very much about scenic surroundings that one may enjoy while getting to the base of the mountain, rather then tough ascend.

The early heroes
For years, highest summit of the range was considered to be Maja Shqelzen (2400m) on the east. One of the first researchers of the area, Hungarian geologist F. Nopcsa visited central Bjeshket e Nemuna in 1905. and indicated Maja Jezerces southeast neighbour Maja Radohines (2570m) located between Qafa Pejes pass and Shtegu Denvet pass as the highest moutain of the whole range. Nopcsa revisited the area in 1907, scaled Maja Radohines, measured the hight with the aneroid and concluded that broad summit east of Qafa Pejes must be the highest in the massif.  Early summer 1929. all major summits in the Bjeshket e Nemuna range were scaled and measured by Italian geodets. Only week or two later three British climbers Sleeman, Elmalie and Ellwood summited Maja Jezerce on July 26th 1929 (first mountaneers to do so), couple of years later peak was scaled by group of Austrians as well. Afterwards, Maja Jezerce felt of the radar for some time. One of few people doing any serious researches was Croat Branimir Gusic.

Gusic himself pretty much an unsang hero of the Dinaric Alps, author of the first Dinaric mountain movie "Durmitor" and antropogeographer by profession, spent considerable time between mid 1930s and late 1960s researching the massif. He scaled Maja Kokervhake (2508m) just north of Maja Jezerce and collected large and unique collection of Malisorian craft and art samples as well as various items of everyday use. His "Malisorian collection" was exibited for years in the Etnographical museum Zagreb, Croatia, before dissapearing in more or less misterious way. Somewhere between, at the eve of the World war II, area was visited by Italian mountain climber Ghiglione. better known for his alpine and Himalayan activity, as well as for his African Ruwenzori climb (he was well over 70 years old when ascended, Ghiglione wrote very nice book Montagne d'Albania (Edizioni Distaptur, Tirana, 1941), perhaps still the best Albanian mountain guidebook ever.  Today, whole of the massif is highly regarded as one of the last moutain wilderness areas in Europe. 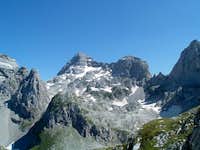 Maja Jezerce is not particulary rich  either by animal or plant species.  Bjeshet e Nemuna, however,  hosts a very high floral and faunal diversity.  Out of 2000 plant species 2 dozen or so are flora endemics (Wulfenia blecicii, Hieracium adamovicii,  Potentilla dorefleri, Kentrantus slavnicii ...)  So far, more then 140 species of butterflies were found  (the richest area in Europe).  Currently an effort is under way  to protect the whole mountain range by proclaiming the transboundary National Park(s) at national  (Albanian, Serbian, Montenegrin) level, which eventually may be followed by proposal for including  the mountain range on the UNESCOs natural heritage list.  It does seem a long way to go, though.

Currently, areas north of the Prroni i That (the dry creek) are protected as part of the Parku Kombetar Theth/Theth National Park Human resources: people of the Nort Albanian mountains are called Malisorians, and between themsleves divided into several major clans; Shala, Shoshi, Nikaj, Merturi Shala and Shoshi sometimes calling themselves Dukagjins, each clan firmly connected to their own mountain valley. Smaller clans like Temali and Toplana  are usually organised under bairaks (standards), smaller standards again, leaning toward connection with larger neigbour clans. 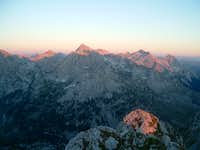 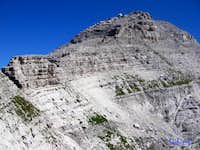 In regard of the transportation means, approach from ex. Serbia and Montenegro is more convenient,  however, here is a basic info, both for the Albanian leg:

Albania’s one major airport  (the Mother Teresa International Airport, near Tirana) has flights to cities in several neighbouring countries.  The national carrier is Albanian Airlines. Malév Hungarian Airlines offers a cheap service  from Budapest to Tirana.  You can fly from many European capitals,   and Athens is among those offering the best value for the money.

The ferry takes from nine to 25 hours,  depending on where you leave from Italy,  and there is another ferry between Koper/ Slovenia and port of Durës/Albania.

South/SW approach by car: Tirana-Shkoder 116km, paved road.  From Shkoder, another 18km till Koplik,  from Koplik accross the Qafa Thores pass (important intersections between major glacial valleys,  Boge north, Shala south, Valbona east, and gateway for the "Accursed mountains"  into the Thethi valley.  Around 80km of unpaved road .  Other option is to drive till Qafa Shilahut pass on the  Shkoder-Prizren road, left turn for Fjerze, over the bridge accross the Drin river to Bajram Curri  and further till Valbone at the end of the Valbone valley. Qafa Shilahut-Valbone, unpaved, 80km or so.

"Yugoslav" leg: By train: Train schedule train Beograd-Bar or vice versa, take off at Bijelo Polje and grab the shared van  ("marshrutka" like transport, in case you haveve ever visited ex-USSR)  toward small town of Berane. Vans are located right infront of the railway station.  And at Berane switch to another one heading for Gusinje.
By car: from Podgorica (Montenegro capital) hit the E-65  toward Kolasin (paved, winding between high mountains).  At Kolasin, turn right toward Murino via Matesevo-Andrijevica.  From Murino, another 11km till Plav lake  folowed by another 10km or so till Gusinje.  Road is paved all the way. Gusinje is 7000 souls town, located on the banks of the Lim river  in the southwest part of the 25 miles long Gusinje-Plav glacial valley (longest in the Balkans).  Not too many facilities there, however,  there is a sufficient number of foodshops and small restaurants, 1 postal office, 1 ambulance,  couple of private-owned bakeries  offering excellent domestic made bread  alltogether enhanced by half dozen or so street cafes.  I

n the old days,  Gusinje used to be an important stopover  on the Shkoder-Peja(Pec) caravan trail.  In the 2d part of the 20th century, large portion of locals has moved accross the ocean.  Today an estimate number of 20000 Gusinje-Plav expats  lives in the city of New York and surrounding areas.
For the summiting details either from the nort or from the south, please check the respective route page in the left page column. For the red tape (permits) related details, please also check the trip report on the left of this page. 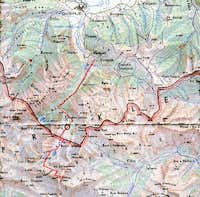 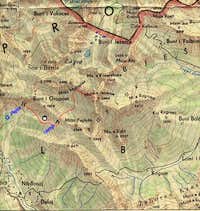 Nearest hut is located 4 and 1/2 miles from Gusinje, in the Grbaja valley, which is going parallel with the Grnja valley and on the eastern side of it. Unshielded, 20 bunks, tap water, no electricity. For the accomodation, one should contact owner, Mountaineering club "Radnicki" Beograd: PD Radnicki Zarka Zrenjanina 31 11000 Beograd Srbija i Crna Gora email: webmaster@pd-radnicki.org.yu Otherwise, bringing a tent is always a good idea.

No meteorological observatory is located close enough to rely full on it still, up-to-date weather forecast for Montenegro can be seen here

Albania is mountainous country in Southeastern Europe. It is slightly smaller than Maryland.

According to the info I got from Radnicki mountaineering club in Belgrade, you can't obtain the permit at Gusinje police station anymore this year. Apparently obtaining the permit via Albanian embassy is also very difficult (from what I've heard). Crossing the border at your own responsibility is possible, although you risk being caught by Montenegrin police. More details in my trip report soon.
Any more redtape news welcome!

There were no problems in obtaining a permission for Maja e Jezerces in October 2006. All you need is to visit Montenegrin police in Gusinje and in Vusanje - the police will ask you for your passport and planned route. Everything takes 5 minutes, if you don't want to stay for a coffee or a tee :-)

The border permits are not a problem. Getting them fast may cause some headache, but there are several companies who provide the service. I Climbed Jezerc with Balkan Natural Adventure https://bnadventure.com/maja-jezerce-climb-it-from-any-three-countries/