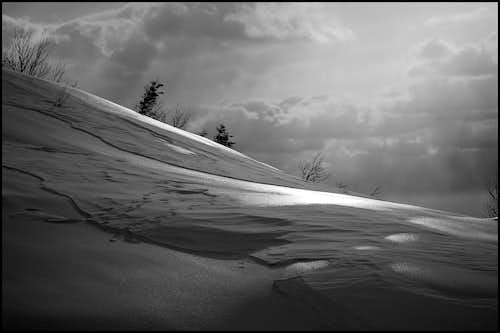 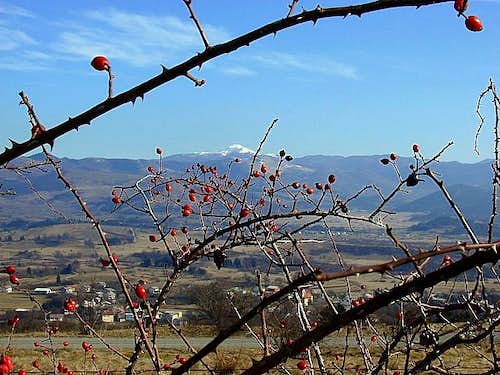 Snežnik from the distance

The name Snežnik means 'The Snow Peak' and is pronounced 'Snezhnik'. Ancient Romans named it Mons Albius (The White Mountain).

Snežnik can be called 'The Third Pole of Slovenian Mountains'. Standing far on the south, it doesn't belong to Alps any more. It is a part of the long Dinaric chain, stretching along the whole Balcan penninsula. Its altitude ensures that it is seen from everywhere in Slovenia and from a big part of the neighbouring Croatia, and of course also a guarantees a broad panorama from its summit.

While this is its short mountaineering characteristic, the true nature of this incredible mountain is far richer. What characterises Snežnik most are its endless forests. Nowadays more than 50% of Slovenia is covered with forests, but really broad and connected areas are on Snežnik massif and around Kočevje town. In both areas there are still many places where man has not step his foot on. This is the area where wild animals can still live in unspoiled nature. It is for example estimated that today some 400 brown bears live in Slovenia. And many of them are in Snežnik forests. Being a mountaineering enthusiast a guided trip through Snežnik forests gives you a complete different experience. Endless woods, beautiful meadows, wild karst canyons, places, where it's better not to enter because of wild animals, on the southern and western part open grassy slopes with a complete different flora, and, finally, the panoramic peak, rising a few hundred meters above forests. On such a trip you soon understand how is it possible that some people can spend a whole life exploring and enjoying these forests.

Snežnik massif has a dense network of forest roads. It's no use to show them all on the map. While hiking through woods is one story, a real mountaineering experience is limited only on the highest parts of the mountain. Marked paths ascend to the summit from all sides. A nice option would also be biking through these vast forests. But altitude differences are quite big.

In winter from Snežnik ski tours can be done. The very summit has nice but unfortunately short slopes for real skiing, but in winter also through forests distance can be made much better with skis than without them. All outdoor activities are supported by a mountain hut on the very summit and a tourist centre on Sviščaki, some 2 hours away.

The elevated parts of Snežnik massif are built of Cretacious and (in a lesser degree) Jurassic limestone, on some places also dolomite. That's why the area is heavily karstified. If it happens that you get lost on Snežnik, the terrain might become extremely difficult to pass. In the times of heaviest glaciation of Europe, also big areas of Snežnik massif were covered with glaciers - but only the part from the highest point towards the SE.

Geography and Other Places To See

On the north, Snežnik massif is connected with the similar, forested shoulder, called Javorniki. The western and southwestern border of the region are the valleys of Pivka and Reka river. Towards the south, the Slovenian area of Snežnik continues with similar hills, belonging to the Croatian massif, called Gorski Kotar (a very interesting summit there is Risnjak, 1528 m). On the eastern side, the boreders of the massif are in the karst valleys of Čabranka, Obrh and the like. In general there are three different types of mountain landscape: the broad forested plateaus and hills, the bare (grassy and rocky) cone of the summit and the broad grassy slopes and hills on the western and south-western side of the massif. The latter are called Gure and Milanja and are also a nice hiking and cycling area. In the broad surroundings there are some other interesting places:

It's not Snežnik mountain itself, but also not far away. For those who love observing karst phaenomena, here are a few pictures.

The Big Caves of Slovenian Karst

Creating this chapter, I had to resolve a dilemma, because this is not any more Snežnik mountain itself. But it is its neighbourhood. And, we all love nature, don't we?

On Slovenian (and a bit also on the neighbouring Italian) karst there are thousands of caves, some of them of gigantic dimensions and many of them of astonishing beauty. The most famous are arranged for touristic visits, as for example: Postojnska jama (jama=cave), Škocjanske jame (the UNESCO heritage), Vilenica, Križna jama, Pivka jama, Dimnice etc. Besides ordinary visits it is possible to arrange also guided tours, which can be an astonishing experience - from hours of walking through the unspoiled underground to hours of underground travelling by boats - all in presence of the most beatuful possible cave decoration.

From the surrounding valleys and planes many roads are entering the massif of Snežnik. But for public use only some are really useful. From the south-west a good road goes up from Ilirska Bistrica. The town can be reached from Postojna (where you exit the highway from Ljubljana to the coast) via Pivka. From Croatia the town can be reached by the road from Rijeka. The other major point of departure is the castle of Snežnik, on the northern side of the massif. It can be reached from the highway via Cerknica and Lož.

Sneznik can be climbed any time of the season. In winter the road from Ilirska Bistrica to Sviščaki is regularly cleaned because of a small sport centre there. If there is a lot of snow the broad forest area is very hard to cross, even with skis. Also orientation in forests can be a major problem (not only in winter). 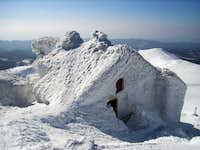 JSF - The hut on Snežnik

We were several times on the summit, but allways did the short approach from Sviščaki. The primary goal was panorama and in two cases to do a ski tour. From Sviščaki, you follow the marked path through the forest. It ascends only slowly and you do quite a distance. In winter if it would happen that you're the first to go after heavy snowing, orientation might be a problem despite the marked path. After 1 h 30 min you reach out of woods and only the summit cone is in front of you. After crossing the slope of the NW shoulder you go up to the hut and the summit directly. The panorama from Snežnik is very broad. On the north and north-west you can see Alps ranges stretching. Of course Julian Alps and Kamnik Alps are the most clearly seen. Towards the west the hilly Slovenian Kras (karst) can be seen and more towards the south-west, the hills of northern Istra stretching all the way towards Učka. Left of Učka, already in the south direction the Kvarner bay is shining. Of it islands, Cres is especially nicely seen. Towards the south-east Dinaric mountains are continuing. First Gorski Kotar with Risnjak, far in the distance Velebit. The whole eastern horizon is the hilly rest of Slovenia.

This is a funny name, isn't it? South-east of the summit there's an area in the forest, where karst phaenomena are very expressed. Deep valleys with vertical limestone walls, holes, labirynths of rock formations, all in the forest, so that the orientation is even harder. They also say that hunters don't like visiters there.

One day a good expert for Snežnik took us on a day trip through its woods. After visiting a few nice places we parked the car on a narrow forest road and started to walk by a hardly recognisable path. But it continued persistently and after some 20 minutes we reached a nice meadow with a water source. In the mud around it, clear, fresh footprints of a bear were seen. Well, also before of this we weren't relaxed much. Suddenly our friend said he was feeling bad. A difficult night or whatever, he decided to take a sleep and proposed us to continue without him. Easy to find, he said, but in next one hour and more we were trying to remember each tree out there. Beyond a saddle in the forest we continued by a shoulder and after reaching the edge of the first karst valley we proceeded right around it. Turning right, turning left, avoiding cliffs, seeing in imagination wild animals everywhere. Finally we climbed over some rugged cliffs and found ourselves in the middle of a wild world of rugged walls and chasms. Beautiful! We carefully tracked the route back. The friend showed up from the other side of the meadow. He told us, that after laying down, when everything quieted down, all sorts of animals appeared. But no bears, of corse. You might ask why am I mentioning those bears all the time. Well, here on Balkan, they are not allways friendly. And - if you think a bit - they are stronger than you, faster, climb better, swim better, all in all, you much depend of their good mood.

Hello Vid,
Of course you are right, these caves are not part of Sneznik but nevertheless you recomended these sites. So I posted some photos. But at least Reka has its origin at Sneznik!
Cheers Klaus