Am I on Paradise or on the Moon?
(George Bernard Shaw, his impressions during his visit to Lovćen)

*Lovćen (read Lovtchen, where “tch” is like “tch” in hitch).

This montain is a symbol, natural, historical and cultural - both of Montenegro (area is known as a craddle of Montenegrin statehood) as of Montenegro´s most famous son Petar Petrovic II Njegos, a poet, philosopher, prince-bishop and statesman from 19th century, a prominent member of old Montenegrin rulling family Petrovic, originating from village of Njegusi, at the foot of Lovcen mountain. Today, Njegos is buried in a sarcophagus in a Mausoleum atop Lovćen mountain.

Lovcen is a mountain in Dinaric Alps, that rises steep from the edge of Adriatic basin, above coastal Montenegro, enclosing eastern and southeastern parts of magnificient Boka kotorska bay. And Lovcen itself, is bordered by Boka kotorska from west and NW; on its SW side lays the open sea, and Budva bay is on the south. So, because it is surrounded by the sea from more sides it is in real sence the mountain of Dinaric maritime chain.

To the east and south-east, slopes of Lovcen stretch all the way to carstic field of Cetinje and hills over Rijeka Crnojevica river, a tributary of Scutari (Skadarsko) lake. To the north and NE Lovcen is spreading into rugged Montenegrin carst, area difficult to live in, very often called “the stony sea” – and those words are telling everything for themeselves. This is probably the sight G. B. Shaw was thinking of when he was mentioning “the Moon”.

The morphology of Lovcen shows more faces. From the coast the mountain rises very steep. From the Bay of Kotor especcially, it rises as a huge stony wall (it rises 500 m on each 1 km of width). The mountain here falls almost directly into water. Around altitude of 900 m there is a change in structure and the slopes above this area rise more gentle.
From the hinterland side, the mountain rises more gentle and gradually.

Like other mountains in the area, Lovcen too has limestone stucture. Its relief and surface shows elements of both carstic and glacial influences - glaciers were present here during Pleistocene period, and lots of precipitation has its role in making&shaping of carstic relief.
Around the summits of Lovcen there are deep carstic depressions (deepest in the wider area) and lots of crevices, chasms and other carstic forms. Some of this depressions (basins) are up to 200 meters deep (Kuk, Bizaljevac, Vuci do, Veliki and Mali Bostur), while the others are shallower. One of those are Ivanova Korita and Dolovi which are also the vastest basins of central part of the mountain. The most visible traces of glaciation can be found on nothern parts of the second highest summit Jezerski vrh.

Thanks to its position and morphology Lovcen receives large amount of percipitation, like Orjen mountain, its first neighbour from the NW. With and average of 3500-4500 mm of percipitation per year (on Orjen even more) this area is considered to be one of the Europe´s wettest (together with Norway´s coast and south part of Bay of Biscay) parts. The reason for such large amount of percipitation is that Lovcen is very often exposed to warm humid winds from the Adriatic sea, that crash suddenly with cooler air above maritime chain of mountains and cause condensation processes.
But because of limestone structure, very little from that liquid stays on the surface, although there are areas where you can find abundant water springs (like on Ivanova korita or at the foot of the mountain, at the sea level). 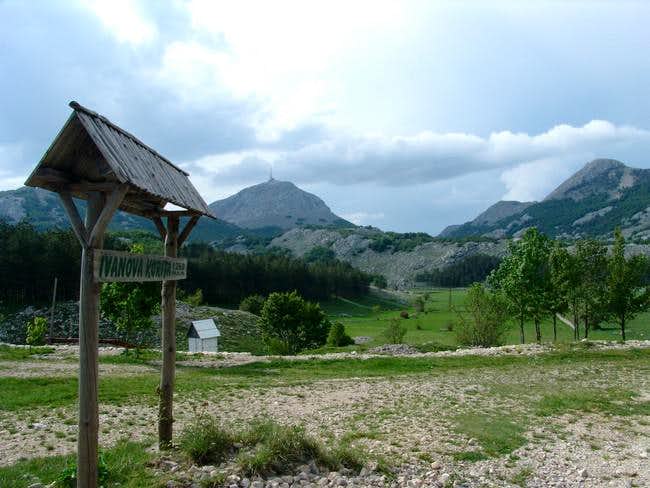 The geographical position of Lovcen and its morphology are the main reasons why the mountain has a mixture of Mediterranean, moderate-continental and mountain climates. On its carstic maritime foot of the mountain (podgorina) the town of Kotor has average year temperature of 15,4°C and Budva 17°C; Lovcen´s carstic foot of the mountain in hinterland (N and East side of central Lovcen area) has yearly average of 10,5°C, and Ivanova korita which lays under highest central summits has a year average of 5,9°C.

Although Lovcen massif covers wider surrounding area (more carstic fields, basins and summits), under the name of Lovcen the most of the people would consider only the highest central area where three of its highest summits stand. Even further, when you´ve mentioned the name of Lovcen throughout history, even until today, the most of people would think on Lovcen´s second highest summit only.

Jezerski vrh (1,657 m, N 42,2559 E 18,5032, Lake Peak) is the name of this summit. Although it is the second highest this is a „real Lovcen“ for many. It got its name after the nearby lake (the word for lake in local language is jezero). The summit is a stony elongated ridge, slightly curved. It reaches 1,657 m on southern part and 1,584 m on northern. A road from Ivanova Korita goes almost to the summit, where the main attraction is a Mausoleum dedicated to Petar Petrovic II Njegos. Because Jezerski vrh is open to public, when one talks about panorama from Lovcen, this would mean a view from Jezerski vrh. And from this summit you can see huge massif of Orjen mountain, part of Boka kotorska bay, Montenegrin coast hinterland, central Montenegro, Rumija mountain to the south, Prokletije mountain chain, other mountains of Montenegro (Garac, Prekornica, Vojnik, Njegoš, Komovi, Durmitor), Skadarsko jezero (Scutari lake) and the town of Cetinje. They say you can see the coast of Italy, on the opposite side of the Adriatic, on clear days.

The mountain is easy accessible, especcially when you come to the area by car. Beside the approach by the road to the summit, you can also climb Jezerski summit by foot, on half-day or one day hikes (from Kotor, f.e.). Most of those hiking trails follow former shepherds´paths but they are not marked (or were marked a long time ago and marks have already faded) and they are choked with rank vegetation today. Those trails start in Njegusi village, Krstac pass, Bukovica pass (on a road from Njegusi to Cetinje), or from Ivanova korita.

The highest parts of Lovcen was declared a national park in 1952. the National Park cover 6,220 ha. Because of different climatic influences and geomorphology the area has very interesting biodiversity – more than 1,300 plant species, of which many are endemic or relict. Steep west slopes of Lovcen are covered with oak trees and underwood in lower zones, and the milder slopes on E in hinterland are predominantly covered with beech-trees. Historical and cultural importance of the mountain were also important in bringing decision to proclaim Lovcen a National park. In the area of National park you will be able to find some old villages and katuns (clusters of shepherds summer huts). Administrative center of NP is in Cetinje town.

View from Jezerski vrh (summit, 1,657 m) in northern direction. Just bellow NW rock of the summit lays small Jezero (the Lake, 1,620 m). Further in the distance a part of Njegusko polje (Njegusi Field), vith the village of the same name can be seen.