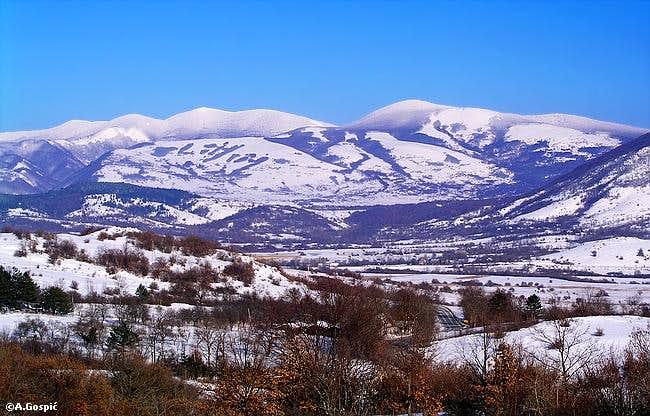 With the length of almost 100km Licka Pljesivica (read Lichka Pljeshivica) is second longest Croatian massif, behind Velebit. It closes Lika region on the east, getting ever closer to Velebit towards its southern end. Licka Pljesivica is a massif of enormous forests and without imposing peaks. Most of them are forested and rounded, highest breach forest line. Massif stretches in NW-SE direction as a part of Dinaric Alps. Northernmost part of the massif has a shape of a ridge which falls steeply on both sides while central and southern parts are more indented with deeply cut valleys, parallel ridges and high lying plateaus. Sides are still steep, especially on the eastern side. It is interesting how steep sides of Licka Pljesivica suddenly rise above flat karst fields on both sides. Southern part has least forest but has huge pasture areas. Licka Pljesivica could have long and beautiful long distance hiking trail but that seams like a distant future from now.

Licka Pljesivica was completely forgotten by the hikers in Croatia even before the 90’s war. Now it is even lonelier. Marked paths are few and far between, there are no refuges on whole massif. Solitude is enormous here, also because Licka Pljesivica is placed in the least inhabited region of Croatia, and one would have a feeling of traveling back to past for several thousands of years if huge network of forest roads (for forest exploitation) wasn’t ever present and ever increasing. Those that are certainly happy with the situation are forest workers and hunters who can do what ever they want there, far from the public eye. Not so long ago forests of Licka Pljesivica had primeval character on whole massif but human greed took care of that.

Well, it would be pity not to use those roads now that they are here so this makes Licka Pljesivica excellent for biking in complete wilderness and loneliness and number of possible combinations is huge.

Ozeblin is highest peak of Licka Pljesivica! It is placed in the central part of the massif, overlooking both sides, western and eastern, while rest of the massif stretches towards north and south. Its sides are steeply falling, on the west into deeply cut Kozja Draga valley, whose mouth is on Krbavsko Polje (Krbava field), near Udbina town. Eastern side uninterruptedly falls almost 1000m to Lapacko Polje (Lapac field). Northern slope is more gentler and descents to Vukosavica meadows which separate Ozeblin from its nearest northern neighbor Runjavac (1589m). On the south shallow pass divides Ozeblin from Crni Vrh (1604m), which is more like shoulder of Ozeblin than independent peak. Farther to the south first real neighboring peak is massive Rudi Lisac (1608m) with its huge forested dome. From it Ozeblin is separated by a large forested plateau which includes Radovica meadows.

SUMMIT
Sides of Ozeblin are under forests, predominantly of beech which is mixed with spruce and fir. Near the forest line, especially on the summit ridge between Crni Vrh and Ozeblin beeches are low and thin, stunted by harsh climate. The very summit of Ozeblin is grassy pyramid, above the forest line, which offers extensive view which reveals some of the hidden and least known corners of Croatia. Forest rim around the summit is made of bush like beeches. The only thing that deranges the beauty is ugly relay tower with a huge ‘reflecting’ plate that has few square meters.

NAME
Name Ozeblin probably comes from a verb ozepsti which means to get cold, to catch a cold which suits it well because of the cold climate. 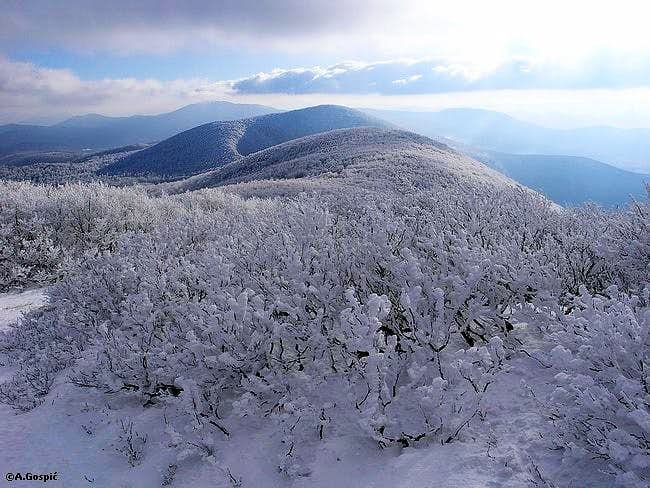 ACCESS
Ozeblin is rarely visited. Chance to meet someone is very low. Approach is possible from two directions, one is marked.

Normal approach (25km + 45min or 5-6h) begins in Udbina town in eastern Lika. From the center of the town road leads in eastern direction, over a Kuk (1142m) pass to Donji Lapac town on the other side of the massif. To Kuk there is 16km, half of it is macadam (from the bottom of the ascent). In the first half, along the vast field, there is nice view to Licka Pljesivica and Ozeblin. Macadam section of this road is suitable for all types of cars and when there is no snow you should be able to drive this part of the approach.
500m before the Kuk pass, forest road towards Ozeblin branches towards left (sign points that Lapac is right). After few kilometers (point 1216m) there is another junction of forest roads where Ozeblin is right (marks on the tree). Next branch is quite far away, on Radovica plateau (1400m). Left road leads over the shoulder of Crni Vrh to Kozja Draga valley while towards Ozeblin you have to go straight. Soon marks will point you left, uphill and away from the road. From the Udbina – Kuk - Lapac road it is around 10km to this point (2h on foot), 25km from Udbina (5h on foot). Road is in solid condition but some spots are not suitable for normal cars. Try and see how far it goes. But also this is very nice approach with the bike (trekking or mountain types) as you drive through beautiful, fresh and lonely forests. From the road it takes some 45mins to the summit of Ozeblin.

Alternative unmarked approach (12km + 1h or 5h) also begins in Udbina town. From the hill on which Udbina sits, descent to Krbavsko Polje field in northern direction (Plitvice, Zagreb). 2km below, after the small bridge over usually dry Krbava river, turn right onto a macadam road which leads 4km over the field to the entrance into Kozja Draga valley. Kozja Draga is deep valley that cuts perpendicularly into Licka Pljesivica massif, straight to the foot of its highest summit Ozeblin. Road was originally built in distant 1808. 12km from Udbina road reaches the Razvala pass (1270m). Road is probably not in good enough condition for ordinary cars but this can be exciting bike route. From the pass head in E-SE direction towards the visible Ozeblin summit. First use grassy ridge Trla and then steeply through the forest to the summit. Hour or bit more is how much you’ll need to the summit.

View from Ozeblin is very interesting and wide and not restricted in any direction.

N-NE: northern part of Licka Pljesivica with prominent Gola Pljesivica (1648m) (26km) summit on the northern end of the massif. Below Ozeblin part of Vukosavica meadow is visible. Left, above it, is Prkos (1513m) – Sanac (1552m) – Runjavac (1589m) ridge. Left of this ridge is forested and narrow Karlovica Korita valley and left above it long ridge of Javornik (Cardak, 1550m).

S: among the rounded peaks of Licka Pljesivica two are highest and most recognizable in this direction. Closer one is Rudi Lisac (1608m) (2.3km). Behind is Kremen (1591m) (13km).

SW: deep below is Kozja Draga valley. 10km away, on the hill left of large Krbavsko Polje field you can recognize houses in Udbina town. On the other side of Lika region is Velebit massif. Sveto Brdo (1751m) (37km) is most easily recognized there, being at the left end of the highest part of Velebit.

W to NW: in foreground is Licka Pljesivica, behind it Lika region which is on the other side closed by long Velebit massif. In NW direction, between Velebit, on the left, and Licka Pljesiciva, on the right, Klek (1181m) is visible.

Currently there is no hiking map of Licka Pljesivica or any of its regions on the market.

Starting point to visit Ozeblin is Udbina town in Lika region. Before Zagreb – Split highway was constructed this was main artery between Croatia’s north and south. It isn’t any longer so this poor part of Lika is now left to vegetate even further. Before there were over 20 bus lines daily from capital Zagreb to Udbina, now there are only around 3! If you are without your own transportation there is also a problem after reaching Udbina because Ozeblin is quite far away if you are on foot from here.

By Plane
Zagreb airport is the air gateway to Croatia. Find info about flights to Zagreb on the official site of Croatia Airlines.

By Bus
Detailed bus timetables from Zagreb to any destination you can find on Zagreb bus station site.

By Car
From Zagreb head towards south (Zadar - Split direction) using A1 highway. After 200km exit at Gornja Ploca. From here it is 20km to Udbina.

From the coastal cities also use A1 highway till Gornja Ploca exit and same road to Udbina.

Ozeblin can be hiked at any time of the year but… In the snowy period, from December to May, roads beyond Udbina are covered with snow and are not cleaned. This makes Ozeblin almost unreachable on foot in a day (plus return), especially if snow is soft. In this period best way to reach it is on tour skis. Make sure forecast is good. Biggest danger in cold part of the year is Bura wind which is cold and quickly creates blizzard conditions reducing visibility to zero.

When there is no snow Ozeblin is easy to reach. Forest roads come to only one hour from the summit. If you are going to walk the roads add couple of hours to the trip but you don’t have to worry about the heat in mid summer because of deep forests till the very summit. Most beautiful periods to visit in snow less part of the year are end of May and first half of June, because of fresh greenery and flowers, and October, because of beautiful autumn colors.

Nearest town which has weather data and forecast on the internet is Gospic in Lika region. For high altitude info and forecast look at Zavizan station on Velebit massif. On WeatherOnline you can find best current data info and 10 day forecast. Forecasts and weather data can also be found on very good site of Croatian Meteo Association.

There are no shelters or camps anywhere around. The only option is to use a tent and you can do that anywhere you want.