When a Highpoint Is a Mountain

Little Saint Joe is considered by some to be nothing more than a highpoint on the way to Saint Joseph Peak. But, I believe it is a destination in and of itself. After all, at 9,033', it is one of the Bitterroot Mountains over 9,000', in spite of the fact that it is not an "officially named" summit.

Then consider this. In Colorado, for a 14er to be ranked it must rise at least 300' above the saddle which connects it to the nearest 14er peak. This guideline has been in use in Colorado for some time. Little St Joe clearly qualifies using this guideline, as it rises about 400' from the low-point of the ridge connecting it to St Joseph.

Those are reasons enough for me; Little St Joe qualifies as a 9,000' peak!

For anyone traveling along Hwy 93 snaking its way through the Bitterroot Valley, Little St Joe is the most visible summit on the east-west massive laying between the Sweeney Creek and Bass Creek Drainages, just a few miles southwest of Florence, MT. Although St Joseph, farther west along the same ridge, has a more elevated summit (9,587') than Little St Joe's 9,033', St Joseph is mostly hidden from the view of those on the valley floor by nearby ridges. Only those able and willing to visit higher elevations are afforded a good look at Little St Joe's "big brother."

The most-used hiking route up Little St Joe is not an engineered trail but closely follows a ridge crest from trailhead to very near the summit. Even though the route deserves only a Class 2 rating at best, because of its steepness, few are willing (or able) to attempt the trip. Believe me, with an elevation gain of 3,026' in about 2.8 miles, the trail is a real test of a person's intestinal fortitude.

As reported in the Ravalli Republic, "On October 16, 1991, Captain John Sieglinger and co-pilot Robert Shaw died when their Lockheed Orion P-3 tanker plane crashed on Little St. Joseph Peak in the Bitterroot-Selway Wilderness. The pair were bringing the tanker from California to help fight the remaining forest fires in the area but encountered bad weather during their approach to the Missoula airport."

The paper also reported, "I was one of the first guys on the scene and actually found one of the bodies," Mario Locatelli recalled. "The plane hit about 400 feet from the top of the mountain and wreckage was strewn out all over the place."

The GPS location for what, to me seemed to be about the middle of the wreck site is 46.20925 N, 114.20925 W, and 8,800' elevation (closer to 200' below the summit than the 400' stated by Locatelli), if you ever want to locate it for yourself. A large memorial cairn is being constructed just south of this location out of the readily-available rock plus small pieces of the plane which still litter the area.

Follow the signs for the Charles Waters Campground which you will reach in about 2.5 miles. Go through (or past) the campground to where the pavement ends at the Bass Creek Trailhead.

Take a hard right (north) uphill onto the gravel road, FR 1136. (At first glance it appear that the road ends at the Bass Creek Trailhead - don't be fooled - keep driving.)

Please note – There are several roads that turn off of FR 1136, but all are gated after a very short distance.

Take a left (south) at the first fork. The correct route (FR 1136) is well-worn compared to the other roads.

There is a wide turnaround at the end of the road with two picnic tables and a fire ring just to the south. There are no signs, facilities, or trail markings.

This picnic area is "officially" known as the Bass Creek Overlook.

The correct trail leads southwest and DOWN from the parking area, just west of the picnic table. Don't be fooled into hiking an incorrect trail that leads UP from this area.

There are no user fees for this area. The usual regulations for use of the National Forest and Wilderness areas apply.

The most recent Forest Service Maps show this entire area as having restrictions. Most importantly, the entire area is closed to off-road vehicle use on a yearlong basis to provide for public safety, reduce soil erosion, and/or protect wildlife.

October 15 to May 15 - The upper portion of the access road is closed to all vehicle traffic to provide big game protection. You can still use the road as long as locomotion is provided by your own power and you don't use a wheeled vehicle.

The Charles Waters Memorial Campground, near the Bass Creek Trailhead, has tent sites available during the summer months.

You can camp off-trail anywhere along the route; however the route closely follows the Wilderness Boundary from a point about halfway up the route, so Wilderness restrictions apply from there to the summit.

The trail leaves the Bass Creek Overlook area in a southwesterly direction by going downhill (I hate it when that happens). Traversing along the side of a steep slope, it quickly enters an area of dense undergrowth. The plants are mostly Thimble Berry, so when ripe, stop for a quick snack.

Upon exiting the Thimble Berry patch, you go up a steep incline for 100 yards or so before the trail levels off a bit.

Although still ascending, the incline of the track stays mostly below 15 percent as far as the 1 mile mark. Along this section you will pass a couple of lookout areas on you left (south) which are good spots to break for picture taking. The views of the ridge crest just south of Bass Creek are stunning.

The little trail maintenance which has been done along this route seems to end at about the 1 mile mark (6,650'), exactly where the trail begins to get really steep. From here on, there is some deadfall on the trail, consisting mostly of trees which are large enough to require cutting before they can be removed. Most of the small stuff has been removed from the route, so it's not all that bad.

This portion of the route is a real slog. When you come to an overlook, you'll likely be more than ready to take a break. There are very few places along this section where the incline is less than 25 percent and can be a real test of your determination.

Approximately 1.75 miles from the trailhead the trail hits a short level stretch just before a small talus field. If you look closely to the right (north) you will see a faint trail leading downhill. It leads to a small stream about 100' yards away where water is available. Early in the year during times of heavy runoff, you can hear the stream. Later in the year it's little more than a trickle but still viable.

Once you've hiked a little over 2 miles, the woods begins to thin and becomes a mixture of whitebark pine and larch. The elevation is about 8,500'. The trail will have turned from almost due west and will now be heading northwest.

As the trees continue to thin, the trail gets a little spotty and is more difficult to follow. Begin watching for cairns, some of them quite small, and do your best to keep a northwest heading. Your route should be moving north of the actual ridge crest and be more of a traverse. You are likely to see tracks to your left (southwest) which lead toward the ridge crest. DO NOT BE FOOLED. Ignore them unless you want to take the long way to your goal.

Eventually the track disappears altogether and you must either rely on your sense of direction or cairns to keep on your northwest route. Your elevation should be about 8,600' by this point. There are at least two lines of cairn traversing across the mountain heather. Either will get you to your destination, so don't worry about which line you are following. Just make sure you're heading almost directly northeast.

What you should be heading for is the right edge of a wooded area on the ridge crest. It should be above you directly to the northeast. When you reach the ridge crest, you want to stay just to the right of the woods (mostly stunted whitebark pine).

Before you reach it, if you kept a good line, you will arrive at the memorial cairn which is in the process of being constructed at the west side of a larch krumholtz. Take a few minutes to add a more rocks and parts from the plane wreck which are strewn about the area.

Once you reach the right edge of the woods on the ridge crest, you will finally be able to see the rubble pile which is the summit of Little St Joe. At this point you only have 200 yards to go.

Enjoy yourself. You've earned it!

This route is at most Class 2, just steep.

Standard clothing and footwear for hiking is all that's required. But, you will be burning lots of energy and sweating profusely. Bring plenty to eat and drink. Carrying a water filter would not be a bad idea, too. On hot days you are likely to consume more liquid than you're willing to carry.

You can climb anytime of year, but there are likely to be at least some snow conditions along the route between late September and late June. But be advised, when the road is closed (mid-October to mid-May) at least 2,500' of elevation gain and several miles is added to the route.

Even with snow on the route, at no point will you be in danger of avalanche. Because the route follows the wide crest of a ridge most of the way, there is no chance for a huge buildup of snow. It's too windy! 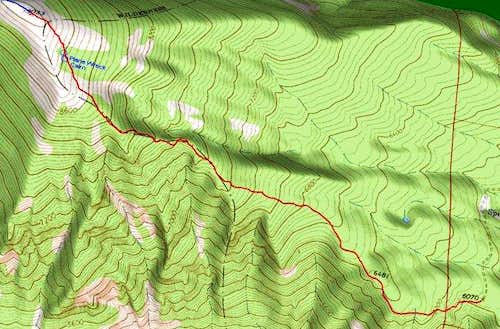