Point 8992 has (of yet) not been assigned an official name. Nonetheless, I refer to it as Gem Lake Peak because it rises majestically from the northeast side of the lake and because it helps place the peak geographically.

Surrounded by some of the highest points in the Bitterroot Mountains, the views from the summit of this mountain are simply astounding. To the west-southwest Trapper Peak peeks, apparently insignificantly, from behind Point 9928 (locally known as East Trapper). Directly west sits the craggy and technical ridge connecting Trapper and North Trapper Peak. West North West is North Trapper whose summit can be reached by a scramble along an especially elegant route. To the north across the twin Trapper Creek Drainage sits Sugarloaf Peak, a seldom-climbed summit. And farther away, on the north side of the Chaffin Drainage, is the long, especially craggy and intimidating, ridge of The Shard, one of the least climbed Bitterroot summits. To the east is the Bitterroot Valley, far below.

These views are easily attainable because reaching the highpoint of this mountain requires nothing more difficult than Class 2 hiking. This is not to say every couch potato could reach it – after all, the route does attain almost 1,000' of elevation gain per mile. Still, even a moderately fit person should be able to stand atop this peak by following the below-described route on a nice summer's day.

From Darby, MT, drive south about 4.5 miles on Hwy 93 and turn right (west) onto Montana 473, also known as the West Fork Road.

At 1.1 miles after leaving the West Fork Road, a road cuts off to your left (southwest). You want to continue straight ahead, just as the sign indicates.

Another mile along the road, at 2.1 miles, you turn right onto FS 5634 and the trailhead for Baker Lake. This intersection is signed. Follow it to the end, which is 9.8 miles from your turnoff from the West Fork Road (The FS sign at the intersection indicates a different mileage but is incorrect).

There is parking space for several cars, but it's a tight spot for turning around.

The trail begins going immediately uphill at the end of the road.

The summit area is in an official wilderness area – the Selway-Bitterroot Wilderness. All "wilderness" regulations should be observed.

Although there are no "designated" camp sites on this mountain, I did see several places along the ridge which looked like good places to spend the night, albeit without ready access to water. But, if one wanted to climb to the summit by a slightly steeper route, there are several designated sites around Baker Lake. For an even steeper (and more difficult) climb, the best camp sites in the immediate area are at Gem Lake.

This route to the summit of Point 8992 is an almost-strenuous two mile Class 2 hike which gains about 1,000' per mile during the ascent. There are astounding views of the surrounding peaks not only from the summit but from almost everywhere along the route.

From the trailhead, follow the Baker Lake Trail south, then west-southwest as it quickly gains elevation to reach the Baker Point Overlook. From the overlook, continue on the trail as it turns west-northwest until you are approximately .5 mile from the trailhead and at an elevation of 7,600' (45.89328 N/ 114.24892 W). This is where you leave the established trail.

Leaving the trail, hike northwest through the open woods, following your own line. After hiking a total of 1.25 miles from the trailhead, you should have reached the crest of the ridge. The remaining .75 mile to the summit is to the south-southwest along this ridge. As you continue climbing, you will pass through an ever-thinning woods of Whitebark Pine and Alpine Larch.

What first appears to be the summit marked with a cairn is only a false summit; however once reaching the false summit only the length of a football field remains to be climbed. The last sections of the climb are over fields of stable talus.

You can climb this summit any time of year; however if you climb it during the winter the approach will be longer. Snow covers the road to the Baker Lake Trailhead most of the winter which forces the parking of vehicles at a much lower elevation, often several miles. But, the road is obvious even when snow covered and can be followed with ease.

Standard hiking gear is all that's required to complete this climb unless you climb it when the ground is snow covered. Then you'll need skis (with skins) or snowshoes and warm clothing – some serious winds come off the higher surrounding peaks. 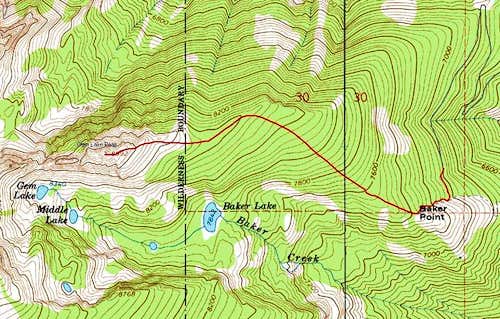