Mac Peak is a massive mountain located in the north-central region of the Alpine Lakes Wilderness in Washington State. Mac Peak is the highest point in the Stevens Pass USGS Quad, with 6859' of elevation and 819' of clean prominence. With no higher peaks immediately surrounding the mountain, Mac Peak has an ideal vantage point for much of the eastern Alpine Lakes Wilderness. In addition, surrounded by at least 10 lakes and/or tarns, Mac Peak epitomizes the very essence of the "Alpine Lakes" area. 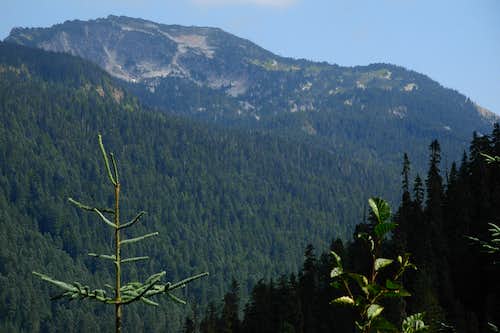 Mac Peak
But despite aspects which might seem appealing, Mac Peak is seldom summited. As such, there are no official defined routes leading to the summit. The mountain is oddly shaped, not conical or gentle-sloped. The east side of the summit is a sheer rock face. The south side is very steeply sloped. The north side of the mountain alternates between sheer rock faces, thick forest-cover, and boulder fields. The west side of the mountain is perhaps the most climbable side, alternating between steep slopes, avalanche gullies, boulder fields, meadows, and tarns. Because of this, the summit route explained on this page is the west route. 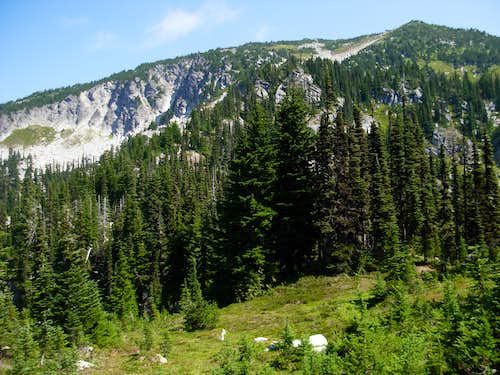 Mac Peak
However, ascending the west side of the mountain requires more than just "keep going up" (such as many other peaks are like). Route-finding skills and common sense are also needed for a successful summit and to keep the technical difficulty of the climb as low as possible. If done correctly, ascending the west side of the mountain should only range between YDS Class 2 and Class 3. With that said, many opportunities for YDS Class 4 and Class 5 sections are also available on the mountain for those who want them.

Mac Peak is home to a wide assortment of wildlife. In large part, this is likely a result of the remoteness of the area, the varied terrain of the mountain, and the many lakes and tarns providing plentiful sources of food and water for animals. Common mammals such as cougar, black bear, mountain goat, elk, black-tailed deer, and yellow pine chipmunk roam the mountain. However, lesser-seen mammals such as short-tailed weasel, pine marten, mink, hoary marmot, and golden-mantled ground squirrel also have been seen on the mountain. Amphibians such as Cascades frog can be found at the multiple tarns on the mountain. Birds such as pileated woodpecker and mountain chickadee are commonly found on the mountain slopes. 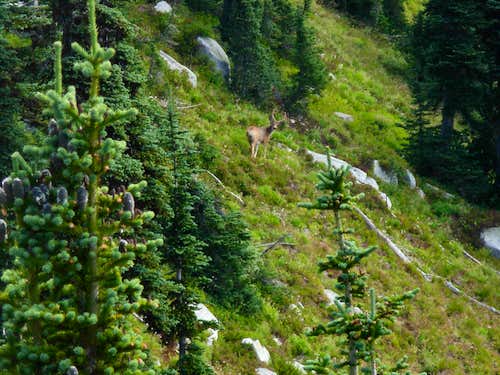 According to local library archives, Mac Peak was named by Forest Ranger John S. Brender in honor of the first name of an early employee of the Okanogan National Forest. However, some reports claim Mac Peak was named by A.H. Sylvester, first Forest Supervisor of Wenatchee National Forest, in honor of a dog named Mac but those reports have been unverified.

Getting There - Driving and On-Trail Hiking

DRIVING:
The total mileage from Skykomish, Washington, to the parking trailhead of Fisher Creek Trail #1059.1 is 23.0 miles. Here are the driving directions:

4) Follow Deception Lakes Trail #1059.2 east for 0.8 miles, to its intersection with the Pacific Crest Trail (PCT).

From the intersection (~4900' elevation) of the Deception Lakes Trail and PCT:

1) Head east off-trail, into thick forest. After a few minutes, a boulder gully is reached. 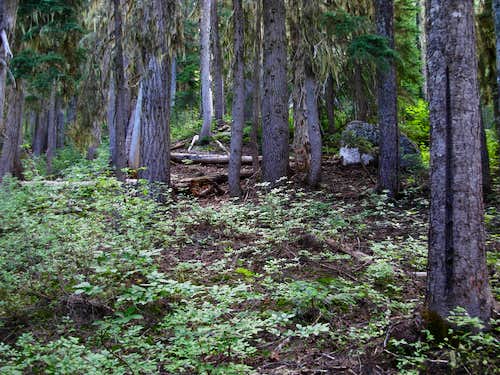 Entering Forest, Off-Trail...
2) Either cross the gully and ascend the steep slope (and then follow it) on the gully's south side, or follow (i.e. bouldering and scrambling) the gully directly. Crossing the gully and ascending the steep forested slope is the least technical of the two options, but both options ultimately lead to the same location: a small meadow area at approximately 5200' elevation.

3) From the small meadow area at 5200' elevation, which is home to a seasonal tarn during half the year (Winter through early Summer), cross the area and head up a narrow gully on the northeast side of the meadow. 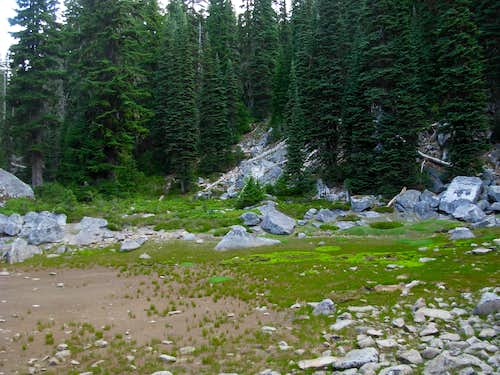 Small Meadow/ Seasonal Tarn Area (5200' Elevation)
4) Once near the top of the narrow gully, an old path might be found after ~5350' elevation. The origins of the path are unknown, possibly an old animal route or old fisherman's route, but if the path is located it is suggested to follow it as it ascends east up the west slopes of the mountain. The path might be overgrown in many places. If the path is not seen or located, continue east by trying to maintain as gentle of a slope as possible. 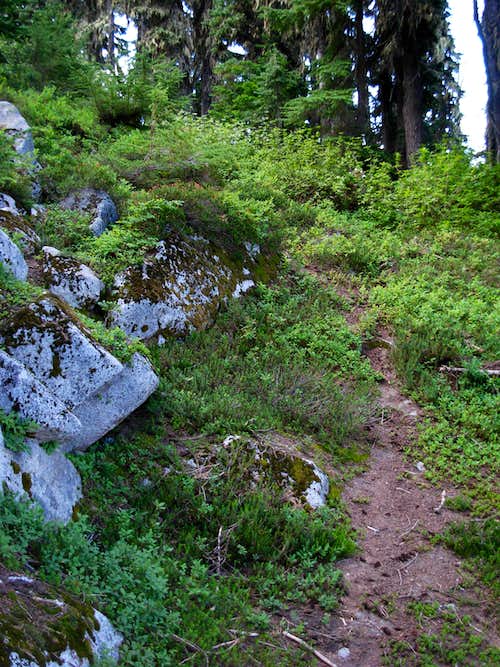 Old Path Found At 5350' Elevation
5) At 5700' elevation, a large meadow area is encountered. To the right (southeast) side of the area is a curved avalanche gully and boulder field. Climbers should ascend that gully, as large rock walls are scattered along most of the other possible options heading east up the mountain slopes. 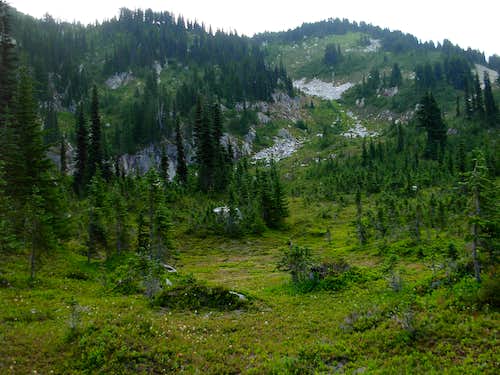 Large Meadow (~5700' Elevation)
6) Either ascend the gully until its top, or try to ascend the left (north) slope adjacent to the gully if/when possible. Regardless of the choice, a large meadow area is reached at ~6100' elevation. A gorgeous small alpine lake (tarn) is on the north side of the meadow, at ~6000' elevation. 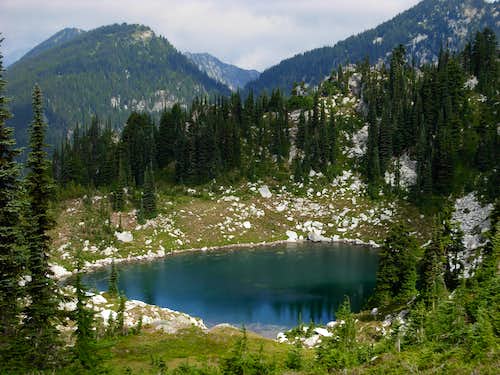 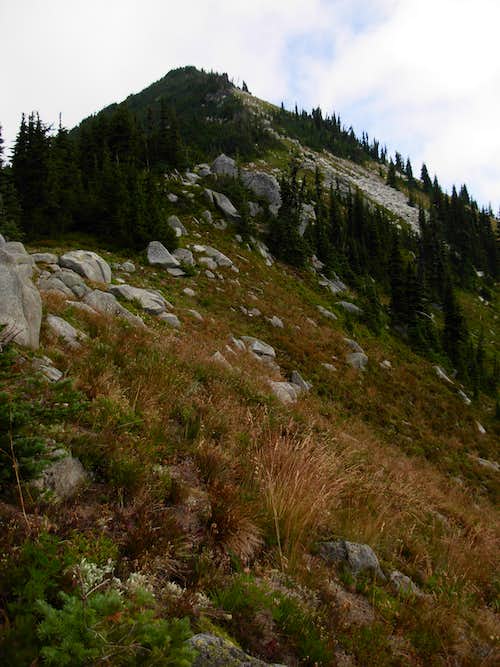 Ascending Upper Southwest Ridge...
8) Once at the top of either ridge, follow the ridgeline to the summit (6859' elevation). The southwest ridge is open on its ESE side, providing wonderful views of prominent peaks such as Mount Daniel and Mount Stuart. 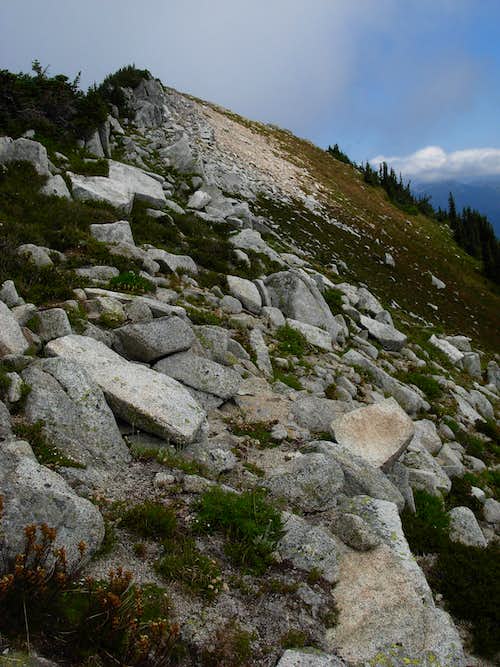 Following WSW Slopes To Summit...
9) The top of Mac Peak has two summit highpoints. Both are similar in elevation, and it is debatable which one is higher than the other. Although it is possible the northern sub-summit might be slightly higher than the southern sub-summit, the northern highpoint is more technically challenging to attain and the southern highpoint contains a summit register. True peakbaggers will likely try to reach both highpoints. 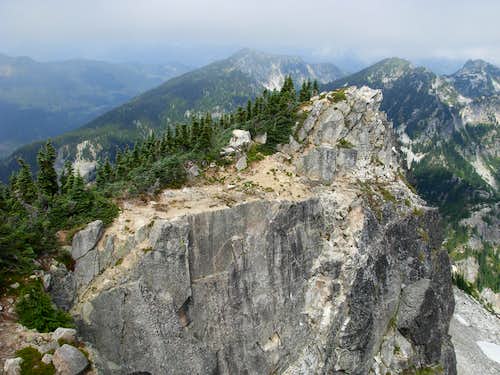 No campfires are allowed within 1/2-mile of Square Lake or Lake Wolverine (both located immediately north of the mountain), as well.

ALL visitors to the the Alpine Lakes Wilderness are required to have a Wilderness Permit from May 15 to October 31. Wilderness permits are free and can be obtained at parking trailheads and local ranger stations.*

No essential gear is needed outside of "10 Essentials" and standard hiking gear/attire. It is recommended to take one trekking pole, to help with balance, but to also have at least one free hand for any light scrambling or bouldering (if needed).

Mac Peak is shown on the center of Green Trails Map #176.