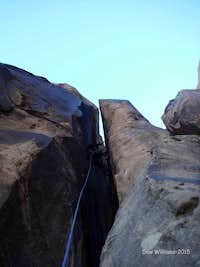 Root Canal, 5.8+
If you look at Molar Tower from Google Earth, it looks just like a molar tooth. It is a relatively short tower located right in front of the River Road Dihedral climbs along River Road. You pull off on the left (heading east) before you get to the Negro Bill trail head paved parking area.  Molar Tower is the obvious tower (to the left as you face the wall) that is split in two which makes for its lone and appropriately named route: Root Canal, 5.8+. Root Canal is a short bolted chimney (70’) climb up the split in the tower that starts at the west end. The crux of the route is the exposed final move from the lower summit to the upper one. A single rope raps the route no worries. It is a relatively new tower route that will just take minutes to complete if you are tower bagging for the day, climbing the dihedral routes and/ or looking for something short to start or finish a day on. The entire tower is well shaded by the steep walls on the south side of the Colorado River.

Take River Road east of Moab (Hwy 128) for approximately three miles. The River Road Dihedral climbs are located to the right of the mouth of a canyon. The next canyon east of this one is where the Negro Bill trail head is.  If you have reached this trail head, you have gone to far.  Pull out on the left (by the river).  Cross the road and walk up the hill to the base of the west side of the tower (1 minute).

Single rope and a few draws.