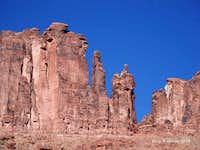 Dolomite and Lighthouse Towers
The River Road climbing area of Moab refers to the incredible stretch of Utah Highway 128 that runs from Moab, up the Colorado River, to Castleton Valley. For anyone who is familiar with this stretch of road, the climbing potential is no doubt endless. If these walls were located most anywhere else in North America, they would be fully developed. But since Moab offers an endless array of climbing objectives, from Indian Creek to Canyonlands, to Castleton Valley to Fisher Towers, only a handful of routes have been developed along River Road. Dow Leading Spear of Destiny
The Navajo and Wingate sandstone walls on both sides of the Colorado River themselves are quite towering, however, there are two distinctive towers located at the big bend in the river to the southeast, Dolomite and Lighthouse Towers. Dolomite resembles a “mini Castleton” on the left. Lighthouse narrows towards the summit as though the very summit would resemble the rotating light of a lighthouse. The position of Lighthouse and Dolomite Towers overlooking the big bend in the Colorado River makes for a fantastic scenic adventure, albeit, not near the remote experience that Canyonlands National Park, Fisher Towers or Castleton Valley objectives offer. The River Road walls are also home to several expansive arches, most notably Updraft and Eye Socket. Negro Bill Canyon is a popular short hike on the south side of the road that reaches Morning Glory natural bridge (6th longest in the US). 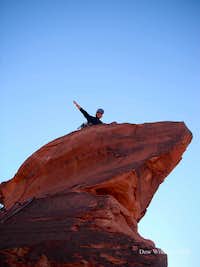 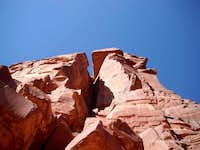 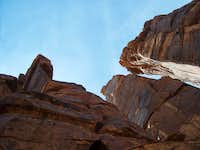 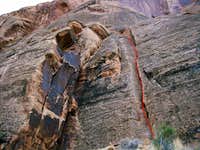 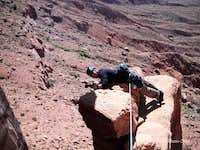 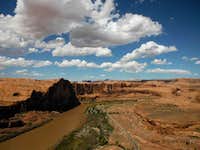 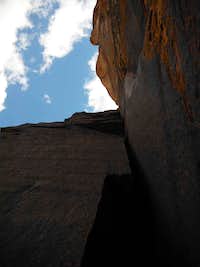 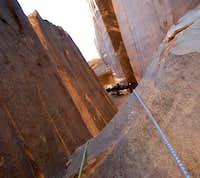 The Crags and Towers are listed from West to East


The right side of the Sorcerer’s Apprentice is listed at 5.11c in Stewart Green’s Utah guidebook and listed as 5.10d as the consensus via four summit logs on Mountain Project. I agree with the Falcon Guide’s grade in comparison to other Moab tower climbs in the region. I consider this climb more difficult than the North Face of Castleton or Fine Jade (both considered 5.11 classics). The rock on all three pitches is not the best which contributes to the sandbag nature of the route, pun fully intended. The first pitch (5.10) offers a variation straight up a tight hands/finger crack in the lower white rock band to access the wide right side corner system of Sorcerer’s Apprentice. This variation is one of the chossier pitches you will climb in Moab, but still looks more attractive than the lay back corner to the right. The second pitch starts out from the deck via off-width (C4#5) and slowly narrows to a roof that you can pull with hands and then goes to fingers as you continue up to the key hole slot for the second gear belay. You can easily use a full rack of cams (double all sizes) on this pitch. The last pitch is the crux of the route. You continue up the right facing corner via crumbly sandstone with finger pockets here and there. Stemming and/or lay backing are the only solutions. It eases slightly towards the top. Although it would seem obvious to continue up yet another pitch from the top of the pillar to the top of the wall, it appears few if anyone has actually done this. Rap with double ropes from the top of the pillar on the opposite side. Dow

Don’t let the name scare you off, my knees were just fine. This is an exceptional long dihedral route with just a wee bit off width. The rock is some of the most solid you will find near Moab. The approach is all of five minutes if even. You do need to be careful about pulling your ropes (double rope rappel), as I could see at least one rope deep in the recesses of the crack. The fixed piton is missing, but should have never been placed to begin with, the route protects really well, but will eat up all the gear you take with you. I suggest a single set of cams with at least doubles from 2” to 4” with maybe four total 3” pieces. Dow


Lonely Vigil was my first climb on Lighthouse Tower and offers a fantastic stem box pitch on the back side (from the road) of the tower. Poseidon Adventure is rated at a softer grade (Webster-1984), but offers a much more challenging crux pitch up a sustained flaring slick wall chimney. Stewart Green’s beta suggest that you “stem up flared off width crack”. Good luck with that. Of the few features the steep walls of the flared chimney give up are the infamous white crystallized quartz nubbins which are extremely slick. I utilized pure chimney technique until the crack narrowed to a fist jam for the upper third of the route. This flared chimney will test the best skilled chimney climbers. Consider this pitch much more difficult than the chimney pitches on Epinephrine in Red Rocks. I brought double gear through 6” and used all the large stuff on this pitch except for one 6” which I did use for the gear belay at top. The first and third pitches involved relaxed 5.8 climbing for the most part. The last two pitches are the same as they are for Lonely Vigil: The easy ledge walk and the tedious summit block finish, which requires down climbing the final 5.9 move to return to rap anchors. Dow

Lonely Vigil is the only route on the backside (east) of the Lighthouse Tower. It requires scrambling or climbing up a short 5.7 section of rock to reach the small col on the south end of the tower. The first two pitches up the east face are really good and long 5.10a pitches that contain the majority of the climbing up the tower. The stem box in the 2nd pitch offers one of the better pitches of tower climbing for the grade. The 3rd and 4th pitches are short mud pitches reminiscent of climbing the last two pitches of Ancient Art at the Fisher Towers, kind of run out and scary, but not hard. The summit is just a tad larger than the summit of Ancient Art. The main difference is that there is not an anchor on the summit of Lighthouse Tower, requiring you to down climb back to the fixed anchors at the top of the third pitch. This is a great route to combine with cragging at River Road Dihedrals to make for a full day. Dow


”This is the easier of two published lines on the tower (the other being Dolofright at 5.11d R). The line was put up by Layton, Joy, and Kordell Kor in 1969. This is a hammerless affair and has been such for years - DON'T NAIL! The aid is mostly straightforward though interesting without being scary (sound appealing yet?).” Radek

Terma was a quick and boring climb for the most part. If you are up there then Terma might as well be done. It is by far the tallest of any of the objectives at Utopia. Three quick pitches get you to the top of the cliff with a great view. The first two pitches are fully bolted. The last pitch is the crux and offers the most interesting of the route, climbing through some calcite deposits. You meander up a splitter that widens and finish in a calcite laden right facing corner to the top of the wall. Three fixed raps easily done with a 70m. Dow

There is not any PG 13 on this pitch in my opinion. It is well bolted up the wide chasm. Previous beta speaks of “crazy body bridges”, etc. Any “body span” needed is in the 5.7 realm. The climbing is mostly just stemming, maybe a bit of chimney technique to get started. Towards the top, you do commit to the right wall (tower side) via positive holds and complete the climb through several more clips. Someone mentioned on Mountain Project that there were not any harder moves than the 2nd pitch on Honeymoon Chimney (the Priest) which I concur with . That rating is 5.7. That is two whole grades different which is no doubt attributed to two different generations who put each route in. If you are used to wide at all, this will just be a fun tower route. Dow

Qebehsenuef is not as much a climb as it is a free air rap with great views of the Colorado River and Arches National Park. Climb past a few bolts (well protected thus I don’t get the PG 13) and rap off the other side for a great photo pose. Basically the same reason you climb Looking Glass Rock south of Moab. Dow