Mount Success is a prominent and massive mountains in the rugged Mahoosuc Range that straddles the NH/ME border. The lower slopes are typical Mahoosuc boreal forest; dense spruce and fir intermixed with deciduous trees. There are two broad, open summits of glacier-scoured granite hemmed in with blueberries and dwarf evergreens. The northern summit (3565') is slightly higher than the southern (3364'), though the southern summit has better views.

Mount Success is the last NH summit encountered by north-bound hikers on the Appalachian Trail and the first of the real Mahoosuc summits. South of here, the range is composed of disorganized lumps and bumps. To the north, it becomes a more coherent range of rugged peaks. In a lot of ways, Success is the anchor mountain for the entire range.

Among locals, Mount Success is also known as the site of an airplane crash in 1954. See below.

Unlike Old Speck or Mahoosuc Notch, Success is difficult to arrange as a day hike. Like much of the rest of the range, Success is best accessed as a multi-day traverse of the range. The Appalachian Trail runs over the summit and the best approach from the south is via Gentian Pond and the trailheads along the North Road in Shelburne (see the Mahoosuc Range main page). The main summit is a rough 2.8 miles from Gentian Pond. 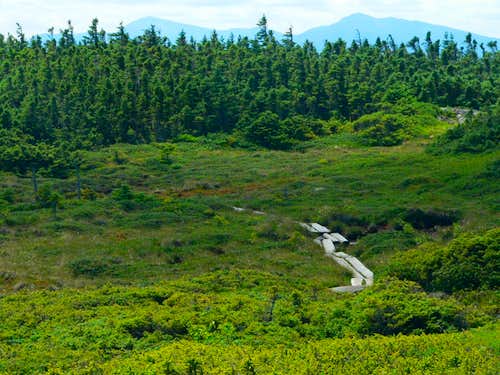 Winding, open trail near the summit of Mt. Success.

Less well known are the approaches from Success Pond Road to the north and east. The Success Trail starts at mile 5.4 and ascends east to The Outlook at 2 miles, a rocky ledge with views of Berlin and the Presidentials. It intersects the Mahoosuc Trail (AT) at 2.4 miles. Turn right and hike anoth34 0.6 miles to the summit of Mount Success.

A slightly longer approach is via Carlo Col. The Carlo Col trail leaves the Success Pond Road at mile 8.1 and ascends a stream valley to the saddle between Mount Carlo and Mount Success in 2.6 miles. This is a wonderful place with rugged box canyons and some exciting rock scrambling. Mount Success is 2.4 miles south along the Mahoosuc Trail.

Camping is available on or near the Appalachian Trail at the Carlo Col shelter 2.6 miles north of Mount Success or at Gentian Pond 2.8 miles to the south. Both sites have water supplies (filter or boil), tent platforms, composting toilets, and camping shelters.

Camping and wood fires are prohibitted except at established shelters/tentsites in the Mahoosucs.

Among the older generation of locals, Mount Success is perhaps best known as the site of an airplane crash. On November 30th, 1954, Northeast Airlines Flight 792 departed Laconia, NH, at 10:37am bound for Berlin (this was back in the day when there were regular commercial flights between these small cities). Onboard the twin-engine Douglas DC-3 were pilot Peter Carey, first officer George McCormick, stewardess Mary McEtrick, superintendant John C. McNulty, and three passengers: James Harvey, William Miller, and Daniel Hall.

The scheduled 35 minute flight became delayed when snow squalls around Berlin dropped visibility to near zero and closed the airfield. The plane, off-course and low on fuel, attempted to fly by instruments to the airfield anyway. Approaching from the southeast at 120 mph, the bare summit of Mount Success loomed into view. The pilot pulled the nose sharply up and converted the plane's imminent head-on crash into a belly landing in the dense evergreens just south of the summit. He had also flipped a switch to shut off all electrical power and prevent an explosion. Had the plane been a few hundred feet higher, they would have cleared the ridge and been able to proceed to Berlin as scheduled. Were it not for the quick thinking of the pilot, the head-on crash would have likely caused the fuel on-board to explode, killing all seven people on-board.

From the perspective of everyone else, the plane hadn't been heard from since it took off and hadn't responded to several radio communications. It was presumed lost along the US-16 corridor near Conway, the normal flight path and considerably south of Mt. Success. Search parties were assembled but hampered due to bad weather. On the morning of December 1st, a faint radio message was heard, "Down five miles..... from Berlin hill". The search shifted to the Mahoosuc Range and intensified as they knew at least one of the seven passengers and crew was alive.

Amazingly, all seven people on-board survived the initial crash. McNulty and McCormick were knocked unconscious. While McEtrick cared for the two unconscious crew, Miller, Harvey, and Hall, along with the badly injured pilot Carey, worked to extinguish the left engine which had caught fire in the crash. The right wing and engine had been ripped off and came to rest a few hundred feet down the hillside. With daylight fading and conditions worsening, the survivors huddled together between seats to keep warm. During the night, McNulty and McCormick died from their injuries.

The next morning, the five survivors managed to build a fire to keep warm and restored electrical power enough to send a brief radio message. This is likely what saved them. The weather continued to be poor and the pilot was beginning to stiffen up from his injuries. No one knew where they were. They spent another night huddled together in the plane.

The morning of December 2 was clear, however, and McEtrick was finally able to see that they had crashed just below a broad, rocky summit. The passengers assembled a flag out of aluminum strips torn from the fuselage and blue fabric from the seats. When a plane finally appeared, they signaled with the flag and were spotted. More planes overflew them and finally a large Air Force helicopter was able to land on the summit. The five survivors were transported to the hospital in Berlin and treated for injuries and exposure from their ordeal.

The wreckage of Northeast Airlines Flight 792 is still in evidence today if you know where to look. Many prize pieces of wreckage have been carried off by scavengers in the past 50 years, but the main fuselage, wings, and tail are still quite recognizable. The main wreckage lies just south of the southern summit of Mount Success along the eastern boundary of the Appalachian Trail corridor. There are a set of rough blazes parallel to the AT which can be followed to a small glade where the remains of the plane still sit.