Wildcat Mountain is a long ridge consisting of five subpeaks named, from north to south:

For peakbaggers, the two that count on the New Hampshire 4000 footer list are Wildcat A and Wildcat D.

The mountain provides some interesting and challenging hiking, but what it has to offer more than anything else is the spectacular view of the Presidential Range. Just a few miles to the west lies Mt. Washington, and the view from Wildcat is straight into Tuckerman Ravine and Huntington Ravine. Several other lesser New Hampshire and Maine ranges are also visible from the many lookouts along the Wildcat Ridge Trail, which is also the Appalachian Trail. Sebago Lake in Maine and the Atlantic Ocean are visible on the clearest days.

The mountain is a good day hike. A loop of the ridge requires a car spot at the trail ends.

This is the view from Wildcat Mountain towards the Presidential Range with Mt. Washington in the middle, Tuckerman Ravine on the left, and Huntington Ravine on the right: 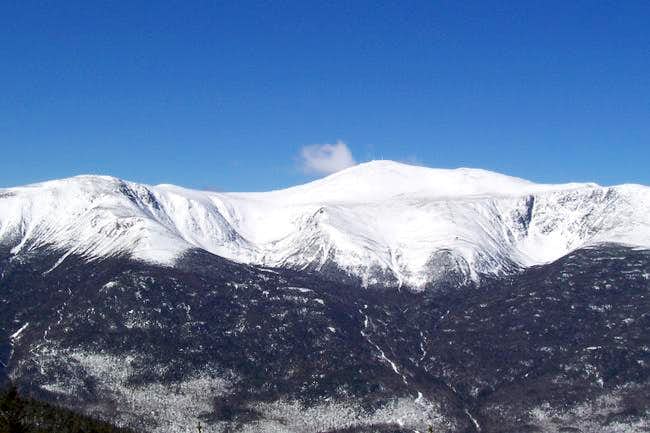 All of the trailheads for the Wildcats are along Route 16, roughly twenty miles north of North Conway or south of Gorham, New Hampshire.

The primary trail across the Wildcats is the Wildcat Ridge Trail, which, for the most part, is also the Appalachian Trail. The trail begins across Route 16 from the Glen Ellis Falls parking lot, which is just south of the Pinkham Notch Visitor Center, and runs north to the Nineteen-Mile Brook Trail near the Carter Notch Hut. At the southern end, the Wildcat Ridge Trail crosses the Ellis River, which can be difficult to dangerous to cross. This can be avoided by using the Lost Pond Trail. The distance to Wildcat D is approximately 2 miles, to A is 4.2 miles, with a total elevation gain of 3150 feet. The distance to the Nineteen-Mile Brook Trail is 4.9 miles. Between the summit of Wildcat A and the Carter Notch, the trail drops about 900 feet in .7 miles over some rugged terrain, which can be tricky in the winter.

Nineteen Mile Brook Trail runs 3.6 miles from Route 16 to the trail junction with the Wildcat RidgeTrail, and then to Carter Notch and the Carter Notch Hut, in the rugged and fantastically scenic spot between Wildcat A and Carter Dome.

The Polecat Trail is a great winter option. This trail is actually a ski trail at the Wildcat Ski Area. The trail runs from Parking Lot C up the left side of the ski area. Check kevraq's picture above for a view of the route. Snowshoes are a must on this trail. The trail leads to the Wildcat Ridge Trail, just below Wildcat D, and avoids the ledges south of Wildcat E which are tricky in the wintertime. Approximate distance to the ridge is 2.75 miles, with about 2000 feet of elevation gain.

No red tape. Parking at the trailheads at either end of the trails is free. No passes are required. Camping is governed by U.S.F.S regulations. Please check the Forest Service rules which govern activities in this area.

As with the other White Mountains, the Wildcats are a four season experience. Spring brings mud and high water; early summer means bugs; winter means bring snow shoes and crampons and the rest of your usual winter gear. As always, prepare for changing weather. In particular, the ridges are fairly exposed to weather even though they are not above treeline. Strong northwesterly winds are common; the weather is just a little better than what is on Mt. Washington just to the west.

Winter hiking provides more challenges. From the south, the approach to Wildcat E involves ridges and significant exposure. From the north, the climb up from Carter Notch is steep and crosses a slide. Crampons and an ice axe should be carried for these approaches.

The Ellis River at the southern end of the Wildcat Ridge Trail may be difficult or even dangerous. This crossing can be avoided by using the Lost Pond Trail.

There are no established campsites on Wildcat Mountain, and camping near the trails and streams is governed by the USFS (see Red Tape, above).

The AMC Carter Notch Hut, which is open all year, lies just to the north of Wildcat A. Check for availability and reservations.

The AMC also maintains the Joe Dodge Lodge at the Pinkham Notch Visitor Center for those who are looking for a less demanding experience. More info.

The USFS maintians Barnes Field on Rt. 16, Pinkham Notch. 6 mi. S of Gorham. 11 group sites. Camping, fishing, hiking. Open all year round. Mid-May to mid-Oct. by reservation only. Fee based on number of people in party. Call 603-466-2713. Limited winter service. Right next door is the USFS Dolly Copp Campground, with 176 sites.

Additonal camping lies not far away in the Tuckerman and Huntington Ravines on Mt. Washington. More info.

Current conditions are available from the Mt. Washington Observatory, which is just a stone's throw across the Pinkham Notch. Check the Higher Summits Forecast.